The next exhumation, that of Falangist José Antonio Primo de Rivera

Faced with the imminent exhumation of Franco's remains, questions arise as to what will happen to the tomb of José Antonio Primo de Rivera, founder of the phalanx. A debate that inte 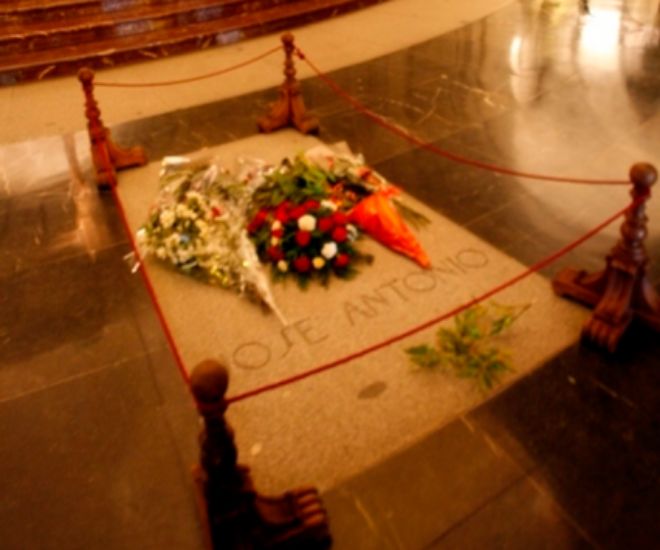 Famous The tomb of José Antonio Primo de Rivera on the altar of the Basilica of the Valley of the Fallen. EFE

The family of the founder of the Falange has not yet heard from the Government, which considers him a victim of the Civil War and intends to move him to the side

Faced with the imminent exhumation of Franco's remains, questions arise as to what will happen to the tomb of José Antonio Primo de Rivera, founder of the phalanx. A debate that Carmen Calvo tried to ditch at a press conference a year and a half ago affirming that Primo de Rivera will remain in the Valley of the Fallen but instead "not preeminent", then they will also exhume him . However, it is an intention with nuances.

The Primo de Rivera close ranks with respect to the matter, to date they have not received any official notification from the executive and therefore have no plans to pronounce. They stayed in the report prepared in 2011 by the commission of experts created at the request of the Government of José Luis Rodríguez Zapatero who studied the transformation of the monument to the dead of the Civil War into a temple for peace and reconciliation.

This report considers Primo de Rivera a victim of the contest , shot at age 33 by the Republican side on November 20, 1936. Not so Francisco Franco, who died in his bed in 1975, also a 20N. Symbolic date celebrated annually by his followers extolling their leaders and whose meetings in the valley the government wants to eradicate.

The heirs of the son of the dictator Miguel Primo de Rivera do not release a pledge on whether they will negotiate with the Government or pleiterán as the Franco have done as soon as they are told what they are going to do with the grave of their ancestor. But it looks like they are willing to sit down and talk, considering that it is not the same to move a tomb from the Valley to take it from there to the Mingorrubio cemetery in El Pardo.

In addition, the Primo de Rivera know that the body of José Antonio, although it does not have the same political connotations as the dictator, has everything to lose if they take legal action against this consequence of the Historical Memory Act of 2007 , as they have been happened to the Franks, to whom even the Benedictine attempt to paralyze the process is of no use. The saga has now resorted to the Constitutional, but the Supreme Court has already issued a sentence that promises to be the final one.

In any case, there is always the surprise factor and it could be that the Rivera Cousins ​​preferred to take José Antonio from there in the case of moving and burying him in a family pantheon. Who knows.

The Other Chronicle has spoken with CSIC social anthropologist Francisco Ferrándiz, who was part of the commission that outlined the new Valley of the Fallen. "The priority was never to get Franco out of there, but to dismantle the Franco's funerary hierarchy from the basilica." This affects Primo de Rivera as well, whose grave is attached to that of Francisco Franco next to the altar and occupies a place of honor . "The idea is to transfer it to the side crypt along with the rest of 34,000 bodies between private and elite soldiers who embrace the basilica on 28 levels of burial."

Ferrándiz comments that the intention of the commission was to reach the maximum consensus and that the exhumation protocol to be followed will be decided by the government, which will also have to respond to the claims of relatives of Republicans buried there without their consent. "There are about 12,000 unidentified bodies, but each one is in its box and is better preserved than previously thought."

Ferrándiz also slides a relevant fact: "There were three members of the committee who spoke out against the exhumation of Franco's remains, however there was a quorum when he proposed to move those of Primo de Rivera."

If Primo de Rivera was also exhumed, it would not be the first time. The student of the figure of Primo de Rivera José Antonio Martín Petón says that days after his death he was unearthed by order of the best-known lover of the politician, Elisabeth Asquith , who very distressed did not give credit to his murder. From the cemetery of Alicante, in whose prison he was shot, he was transferred by order of Franco to the Monastery of El Escorial. And from there, in 1959 to the Valley of the Fallen, a day before its inauguration.

Franco used in his dictatorship the figure of Primo de Rivera, something that ignites Petón . "It is unfair because they had nothing to do, neither human nor politically speaking. Primo de Rivera tried to stop the Civil War, radically condemned fascism (...). José Antonio would not care where his remains are. It is more important to know his legacy. If this serves to claim his figure, then go ahead. "

José Antonio's heirs remain silent, but they also possess a controversial title granted by Franco, the Duchy Primo de Rivera, requested by Fernando, eldest son of Miguel Primo de Rivera, who died this December. Miguel, a key character in the Transition, was the nephew of the founder of the Falange and Pilar Primo de Rivera, a well-known leader of the Women's Section.