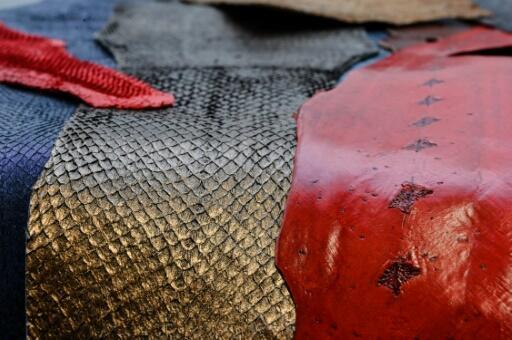 Salmon scales replace croco skins, pineapple leaves are used to produce new fabrics, cotton is fully traceable: in the textile sector, innovations are not lacking for responsible consumption that has become a reality.

"Eco-friendly fashion products are needed," says a study conducted before the holding of Première Vision, the show of the fashion industry that brings together 1755 exhibitors in Villepinte, north of Paris, from 17-19 September. spinners, weavers, tanners. Nearly 60,000 international visitors are expected.

Nearly half of European consumers bought responsible fashion products in 2019, a consumption that stands at 45.8% for the French market.

In France, consumers devoted an average of € 370, half of the average budget clothing and footwear in France, according to this study conducted by the Chair IFM (French Institute of Fashion) and Première Vision with over 5,000 consumers in France, Germany, Italy and the United States.

"In the criteria that are important for the consumer, there is the protection of the environment, a result that was not inevitably predictable," says AFP Gildas Minvielle, director of studies at the IFM.

"Consumers have also realized that clothing is a material, that it has to meet a certain number of criteria and that it is itself eco-responsible," he adds.

If this new consumption habit sets in, however, fashion is lagging behind in diet and organic cosmetics.

"The consumer is lost in a profusion of labels and lacks clarity and has a fear of greenwashing," said Chantal Malingrey, head of sustainable development at Première Vision.

- Fabrics based on agroalimentary residues -

"More and more, we have materials that are derived from residues from another industry, a lot of which comes from the agri-food industry," remarks Marina Coutelan, in charge of eco-friendly fashion at Première Vision. "It's really the future!"

Circular Systems, based in Los Angeles, offers fabrics with the look of classic cotton but made from fiber extracted from pineapple leaf mixed with banana bark and hemp oil.

The same principle applies to Ictyos-Cuir Marin from France, based in Lyon, which upgrades the skin of salmon and tanned sturgeon without chromium. "Fish scales become a nice alternative to crocodile skin and can completely replace exotic skin," says Coutelan.

The Greek company Varvaressos is an example of the importance of monitoring the entire cotton production chain, because at Varvaressos, "between the cotton fields and the local spinning mill there is only 190 km".

"Generally when a fashion brand buys a fabric, we come to know that the fabric was made in Italy for example, the thread comes from Turkey, but back one step above it is always very complicated," says Ms. Coutelan .

"Sometimes, cotton can grow in China, be spun in India, woven in Turkey and then go into production in Bangladesh to be sold as a finished product in the US So we have catastrophic impacts in terms of emissions. CO2, "she adds.

Several industry initiatives are also aimed at defending the leather and wool, explaining the manufacturing methods, in the face of criticism that may push some houses to stop the use of these materials.

It is important for brands and the consumer to know where the skins come from and how the animals are treated.

"The problem is not leather or wool but the way these elements are produced.When we know how sheep are raised, how they are shorn, that reassures," says Marina Coutelan.

The ID Factory group can trace the entire cycle of leather production.

"In fact, the sheep need to be shorn, and if we stop the leather, we will have to burn the skins of 300 million tons of meat that are eaten.That will be the disaster in terms of CO2!", Warns Mrs. Coutelan.