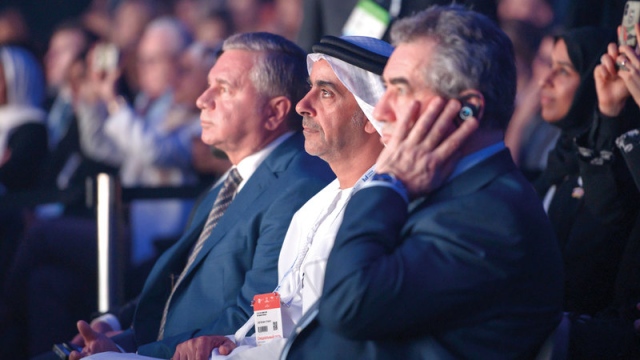 Under the patronage of His Highness Sheikh Mohammed bin Zayed Al Nahyan, Crown Prince of Abu Dhabi and Deputy Supreme Commander of the UAE Armed Forces, the third edition of the Aqdar World Summit was inaugurated yesterday by HH Lt. General Sheikh Saif bin Zayed Al Nahyan, Deputy Prime Minister and Minister of Interior. Under the slogan «Empowering communities globally .. Experiences and lessons learned», in conjunction with the Moscow World Forum «City of Education» during the period from 29 August to 1 September next in Moscow.

In his opening speech, HH Lt. General Sheikh Saif bin Zayed Al Nahyan expressed his pride in holding this edition of the summit in Moscow, which comes in accordance with the vision of the UAE leadership, as well as Russia's distinguished participation in the previous summit in the UAE, which emphasizes the importance of joint action and relations between countries in strengthening Human empowerment.

His Highness said: “The story of the UAE and the UAE is as old as human history, but the story of the United Arab Emirates with its federal entity is only 50 years old, a success story written by the founding leaders of the UAE entity, led by the late founding leader Sheikh Zayed bin Sultan Al His Highness pointed out that the human being is the focus of the founding leader, his directives were - God bless his wealth - to maintain his rights and provide all means to care for him and prepare and enable him to serve his country and society, believing that man is the basis of development and civilization.

His Highness added that Sheikh Zayed's vision was reflected in the importance of empowering the citizen through his insistence on the advancement of the people of the country towards pride, and he was always saying that building man is a national and national necessity, preceding the construction of factories and establishments, because without a good man, Bring prosperity and goodness to this people.

His Highness said that we are here today in Moscow «Moscow City of Education», the ancient capital of history, culture and science, within the general directions of the Government of the United Arab Emirates, and strive to promote the concepts of humane and positive coexistence, and the exchange of experiences with all other countries and cultures, adding that they It is also an occasion for the UAE to showcase its experiences in human empowerment in various fields such as education, knowledge, space, youth empowerment, people of determination, artificial intelligence and cultural empowerment, among others.

His Highness pointed to the successful positive relationship between the UAE and the Russian Federation, which was reinforced in the signing of His Highness Sheikh Mohammed bin Zayed Al Nahyan and President of the Russian Federation Vladimir Putin last year, to serve as an advanced step on the road. Strengthening relations and mutual cooperation, and is a strong momentum for expanding the relationship in the fields of politics, security, trade, economy and culture, as well as humanitarian, scientific, technological and tourism fields.

His Highness said that the UAE's balanced policy, which is based on transparency and respect for the sovereignty of countries, has strengthened its global position and made it an active force, and a major partner “political and economic” for the strongest countries, as a result of the wise vision of the leadership in shaping the UAE's relations with all countries aimed at development and progress and build a better future. For future generations.

His Highness expressed his delight at this summit, which witnesses the presence of UAE ministers and officials to participate with their counterparts from the Russian government and specialists in several fields in more than 26 workshops, stressing the aspiration towards positive results of the summit, which contributes to enhance the exchange of experiences between the two friendly countries in all fields. Following the opening ceremony, Lt. General Sheikh Saif bin Zayed Al Nahyan, accompanied by the Mayor of Moscow, Sergei Sobyanin, visited the exhibition accompanying the summit, where they were briefed on the latest practices and developments in various sectors, which are presented by a number of decision makers, leaders and specialists. The summit is expected to attract around 130,000 visitors and participants from around the world over four days.

HH Lt. General Sheikh Saif bin Zayed Al Nahyan, Deputy Prime Minister and Minister of Interior, met in Moscow, Mayor of the city Sergei Sobyanin, on the sidelines of the launch of the Akdar World Summit in Moscow, in the presence of a number of ministers and officials from the UAE participating in the summit Currently.

During the meeting, the two sides discussed a number of issues of common concern, stressing the importance of holding the Akdar World Summit in the Russian capital, and Russia's active participation in the previous summit, which reflects the distinguished relations between the two friendly countries.

The two sides touched on a number of topics in the technical aspects, artificial intelligence, educational and cultural fields and areas of benefiting from the experiences of the two countries to enhance joint work.

11 sessions and 40 speakers in 3 main themes

This year's Iqdar World Summit boasts a high-level agenda of 11 practical sessions by some 40 speakers and experts, who will share their views, experiences and knowledge in various fields. The conference will discuss three main themes: education and national service, key elements for the empowerment of Emirati youth, and technical, intellectual and food security: strategic pillars to empower communities and youth - the UAE as a model, advanced science and future projects, and their roles in empowerment and community welfare. In addition, this year, the Summit will be marked by a unique program of workshops presented by a group of experts, professionals and academics from the UAE, Russia and other countries through 26 specialized workshops focusing on issues related to the development and empowerment of communities in various fields.

HH Lt. General Sheikh Saif bin Zayed Al Nahyan, Deputy Prime Minister and Minister of Interior, has launched on the sidelines of the opening of the Aqdar International Summit the “Aqdar” Academy, which aims at empowering young people and enhancing their abilities and talents and developing a positive spirit of citizenship.

His Highness also launched two programs of the Academy in Russian: intellectual security and tolerance, which allows the trainee to learn in Russian without any difficulties. The participant receives a certificate of achievement from the Khalifa Empowerment Program in case of completing the training material and passing the test.

Akdar Smart Academy is the first of its kind in the world, offering seven educational programs aimed at empowering young people, developing their skills and raising their national sense. Exchange views and research, and educate a generation of ambitious and faithful young people for their religion, homeland and leadership.