On April 23, a unit of the French Armed Forces will arrive in Estonia. About 300 personnel, as well as five tanks and 13 infantry fighting vehicles will be deployed approximately 140 km from the Russian border. It is noted that the maneuvers are carried out within the framework of the NATO mission to strengthen the military presence in the Baltic countries and Poland. In addition, the UK has previously deployed five Apache attack helicopters and 110 military personnel to Estonia to “counter the threat from the Russian Federation.” Meanwhile, on the eve of this, Russian President Vladimir Putin, at a meeting with Estonian leader Kersti Kaljulaid, called “absolutely groundless” the fears of Tallinn and other countries in the region about the “Russian threat”. 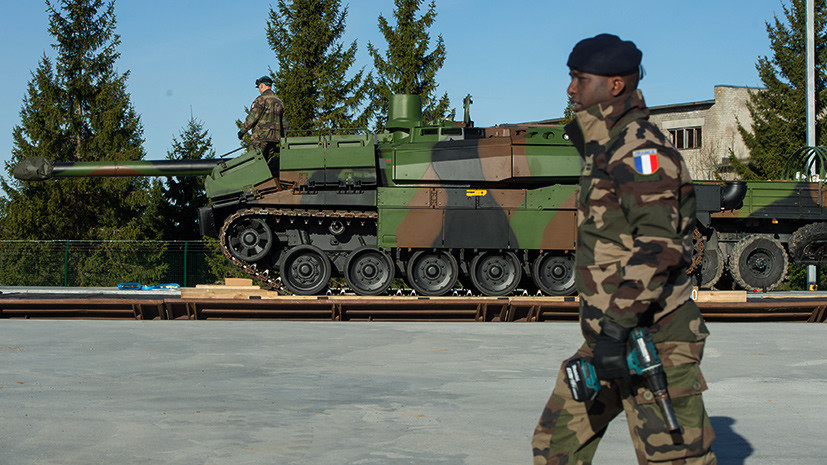 On Tuesday, April 23, a unit of the French Armed Forces will arrive in Estonia as part of a NATO mission to strengthen the alliance’s military presence in the Baltic States and Poland (FRA-EFP LYNX). This is stated in the message of the Embassy of the Fifth Republic in Tallinn.

300 soldiers, representing the second brigade of the French army and detachments of the foreign legion, will go to Estonia. Also in the Baltic country by rail will deliver military equipment, in particular, five tanks and 13 infantry fighting vehicles (BMP).

It is noted that the French division will be deployed in Estonia until the end of August, and its location will be the city of Tapa, which is located about 140 km from the Russian border.

“We are very pleased to have the opportunity to work with our allies and improve our compatibility,” said a statement by a member of the unit, a major named Marc-Antoine.

Note that in the Estonian counties of Lääne-Virumaa and Ida-Virumaa, from April 29 to May 17, large-scale Spring Storm - 2019 exercises will take place (Kevadtorm 2019). In total, the maneuvers will involve about 9 thousand soldiers from 15 NATO member countries.

Earlier, the United Kingdom sent five Apache attack helicopters and 110 Special Air Service personnel to counter the “very likely” threat from Russia to the Estonian air base at Ämari. In May, the United Kingdom intends to transfer about 2,000 servicemen to the Baltic Sea in the framework of the NATO Baltic Defender - 2019 exercises (Baltic Protector - 2019).

The Russian embassy in London described such steps as another deliberate provocation and the desire of London to support the topic of “aggressive” Russia in their own interests.

“We see Gavin Williamson’s next anti-Russian attack (British Secretary of Defense - RT ) as further evidence that NATO’s main focus is on fighting the mythical“ threat from the East ”, which we are actively trying to dissuade from the high NATO tribunes,” says in a statement of the diplomatic mission.

Russian diplomats stressed that the North Atlantic Alliance can call its “achievement” the militarization of Europe and the heightening of tension, which contradicts the main task of any military bloc regarding ensuring the security of the population of its member countries.

Earlier, RT wrote about the report of the Atlantic Council, an American think tank that called on NATO countries to increase defense spending and restore a "fighting mindset", including due to "the rebirth of Russia as a strategic threat."

The meeting of Putin and the president of Estonia

Meanwhile, on Wednesday, April 17, the first full-fledged meeting of the presidents of Russia and Estonia since 2008 took place. The working visit of the Estonian leader Kersti Kaljulaid was timed to the opening ceremony of the main building of the country's embassy after a three-year restoration. The diplomatic mission of the Baltic state is located in a historic building in Maly Kislovsky Lane.

At the beginning of the conversation, Vladimir Putin described an abnormal situation in which for many years there were no contacts between officials of neighboring countries.

“As a result: in previous years, the trade turnover fell by more than 50%. True, over the past year it has been slightly adjusted - plus 17%, ”Putin noted.

In this regard, the heads of state discussed the current state and prospects for the development of bilateral relations in the trade, economic and humanitarian spheres. According to the Russian leader, Moscow and Tallinn have many common interests, including in relation to the Baltic Sea.

“Russia has never represented and does not pose a threat to any of its neighbors,” said Peskov in an interview with the First Channel.

Note that in March, the Estonian Foreign Intelligence Service released a report in which it called Russia “the only serious security threat in the region”. Moscow is allegedly preparing for a full-scale conflict with NATO countries.

Later, the annual report was presented by the Estonian Security Police (KAPO), which also stated that the Russian side allegedly intends to weaken the existing system of values ​​and fundamental rights and freedoms of the society. In addition, the Russian Federation allegedly recruits young Estonians through the implementation of humanitarian and educational programs.

The Russian embassy in Tallinn said that in this way the authorities are trying to artificially force anti-Russian sentiments in society.

“We again see an attempt to intimidate the Estonian population, which is driven by the thesis about the“ hostility ”of the eastern neighbor, the dangers of economic, educational and interhuman contacts between our countries and peoples,” the press service of the Russian Embassy in Facebook said.