Park Hae-soo "Who called you oppa?"... Reaction when a young fan calls him 'oppa' 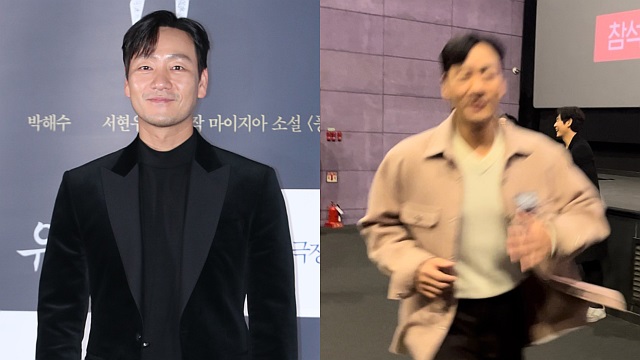 While actor Park Hae-soo is digesting the stage greeting schedule for the movie 'Ghost', his reaction when he was called 'brother' by fans is a hot topic.

Audience member A, who went to the ghost stage greetings on the 23rd, posted on social media, "Park Hae-soo is so funny. 'Hae-soo oppa!!!'

So he said, 'Someone called me oppa' and ran."

In the photo released by Mr. A, Park Hae-soo ran in a hurry and couldn't even clearly capture his face, and there was a sense of urgency in running towards the fan.

In the video that followed, Park Hae-soo was seen running quickly from the entrance of the theater to the audience seat on the opposite side toward a fan who called him 'oppa'.

In addition to this, Park Hae-soo shyly refused to be called 'oppa' to the fans who shouted 'Hae-soo oppa' and 'Oppa me too!' at the 'Ghost' stage greeting, saying, "I can't be called an older brother...".

In response, fans suggested various titles, "Then how should I call you? Uncle? Mister?" Park Hae-soo laughed, saying, "Mister would be better."

Not only that, but during the stage greeting, even actor Seol Gyeong-gu called out Hae-soo Park, “Hae-soo oppa!!” and guided him to the fans, drawing laughter.

Park Hae-soo, who recently met fans through the 'ghost' stage greeting, is gaining popularity by showing a sweet image by approaching the fans who call him 'oppa', even though he is embarrassed, by approaching them first, greeting them, and signing autographs.

Fans who saw his reaction to 'Haesoo oppa' said, "I should say Haesoo oppa when I go on stage greetings", "Haesu oppa is handsome", "On the day he lowered his bangs, oppa or mister?", "I became an oppa as a ghost. Park Hae-soo", "Because he's sweet, he's an older brother", etc.

Born in 1981 and turning 41 this year, Park Hae-soo has a diverse fan base by acting in the dramas 'Prison Playbook', 'Squid Game', 'Suriname', and films 'Quantum Physics', 'Yaksha', and 'Ghost'.