The group of experts was born with the Plan for addressing Advanced Therapies in the National Health System (SNS): CAR drugs, approved in November 2018. The plan proposes... 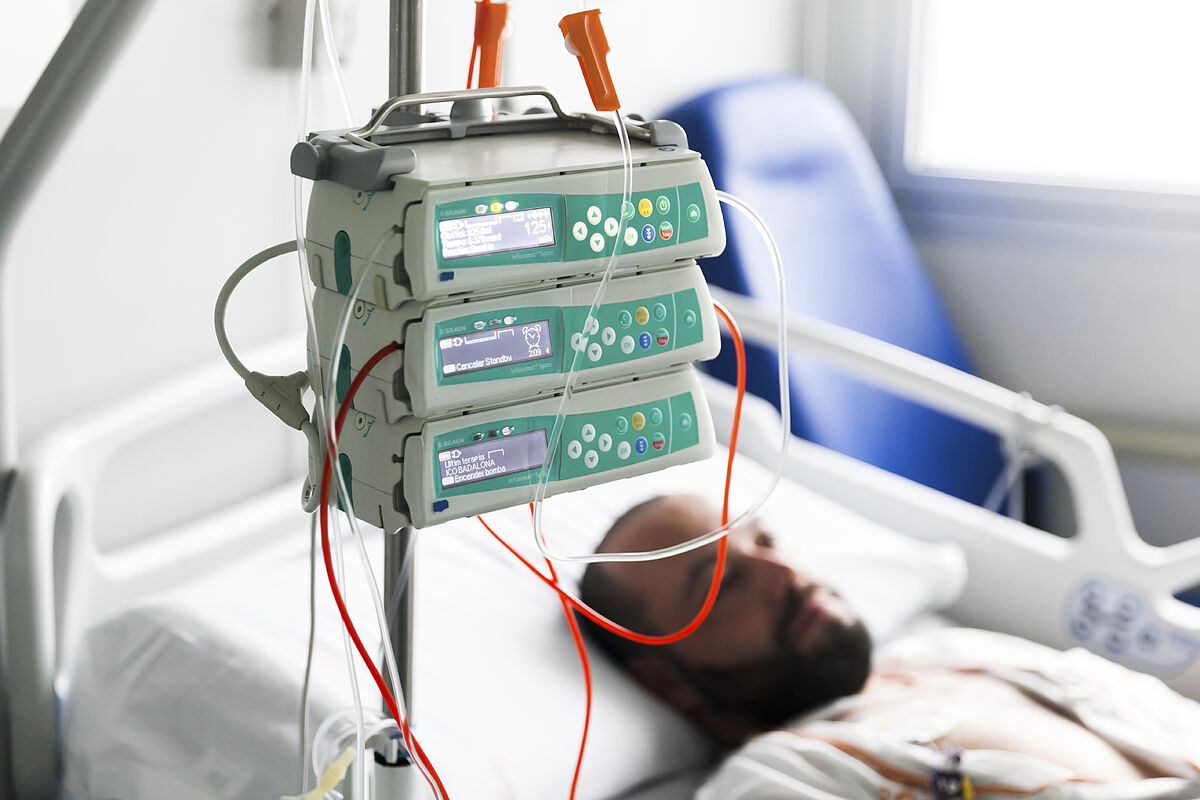 The group of experts was born with the

Plan for addressing Advanced Therapies in the National Health System

(SNS): CAR drugs, approved in November 2018. The plan proposes that it be made up of

Among its tasks, it specifies "assessing the requests made by the SNS specialists, whose favorable report will be mandatory for the use of the drug".

There is unanimity in recognizing that this system has contributed to a homogeneous landing of advanced therapies in the National Health System.

One of the specialists who have made up the group since its inception, Susana Rives, head of the Leukemia and Lymphoma Unit and the CAR-T Unit of the Pediatric Hematology and Oncology Service of the Sant Joan Déu Hospital in Barcelona, ​​explains that "the experience It has been positive since it has allowed harmonizing the care process of CAR-T therapy in Spain and

that patients in our country can benefit from this treatment

Another of the experts, José Antonio Pérez Simón, head of the Hematology and Hemotherapy Service at the Virgen del Rocío Hospital and researcher at the Seville Institute of Biomedicine (IBIS), also has a "very positive" impression, who also considers that the group contributes a "

In an analysis of the

(618 with a diagnosis of lymphoma, especially the Diffuse large cell B or DLBCL, and 150 B-cell acute lymphoblastic leukemia or B-ALL).

Of the requests received,

Another member of the expert council, Fermín Sánchez-Guijo, director of the Cell Therapy Area of ​​the University Hospital of Salamanca and section head of the Hematology Service, believes that many patients who are candidates for CAR-T therapy in Spain are benefiting from this treatment.

In minority cases where experts do not consider the indication to be favourable, "since the evidence does not show that there is a benefit from CAR-T therapy, it is usually indicated whether there is another alternative: an open clinical trial, other drugs that

be recommend or compassionate use".

Each request is sent by email from the General Directorate of Basic Portfolio of SNS and Pharmacy Services to three experts;

no one knows who is evaluating each specific case

in this way, a decision free of influences and ties is ensured.

a term of three business days (72 hours) or, if it is a vital emergency, 24 hours

According to the latest report from the Ministry of Health published in July, up to March 2022, 132 cases of lymphoma (21%) and 66 of ALL-B (44%) were requested as vital emergencies.

In approximately half of the lymphoma cases classified by the applicant as urgent, the expert group considered that they did not fall into this category.

on which the experts are based were prepared in 2019, as were those for the management of serious adverse effects and on the technical procedures for obtaining samples with which to manufacture the drug and administer it.

Without going any further, this March the European recommendations on the management of adult and pediatric patients with CAR-T were published in the

, signed by the European Society for Hematopoietic Transplantation (EBMT), the Jacie accreditation committee of the International Society for Cell Therapy (ISCT) and the European Association of Hematology (EHA).

Among the exposed updates, Sánchez-Guijo, one of the authors of the recommendations and vice president of the ISCT, highlights that "

if the patient is well, there is no established age limit where it has been shown that they will not benefit

"Thus, the assessment of cases is somewhat more flexible today than in the first moments of use of the therapy. "At the beginning we stayed at 75 years of age, and today it is indicated if there is an older patient with a good general condition".

Pérez Simón also abounds in the considerable amount of evidence that is accumulating in a short time and that must be reflected in the assessments.

By way of example, he states that "

infiltration of the central nervous system

, within the data sheet, is an exclusion criterion. However,

. The group's experts are aware of the changes, but due to the rate of advances in knowledge, it might be necessary to carry out a

periodic review to verify that we maintain the homogeneous criteria

Susana Rives is also of the opinion that the indications should be reviewed periodically.

One that she considers could be updated is that of

children with Down syndrome in their first relapse

"These patients have approved the indication for a second relapse or relapse after transplantation, as occurs in the rest of the children. However, the prognosis in the first relapse in children with Down syndrome is very poor (survival less than 20%). These are patients who

, as well as a high percentage of relapses after transplantation CAR-T therapy in the first relapse could

in some of these patients and, such time,

Due to the very small number of patients, it is very difficult to confirm these results with clinical trials.

However, the data of this CAR-T therapy in children with Down syndrome in more advanced relapses already showed that it had a toxicity and efficacy similar to that found in other children, therefore, given the poor prognosis with standard therapy ( intensive chemotherapy followed by transplantation) in first relapse, I believe that it is justified to expand this indication".

Other indications that can be reviewed

This expert also mentions among the indications to review "the

. Leukapheresis is allowed 4 months after the transplant, but the infusion, in the indication should be postponed to 6 months.This makes patient management difficult, especially if they are refractory to chemotherapy, and means that some patients are unable to receive CAR-T cells due to toxic complications of bridging chemotherapy or progression of I think once the apheresis is done, if the patient doesn't show graft-versus-host disease, you should be able to infuse the CAR-T cells as soon as the product is ready."

In the opinion of Manel Juan, head of the Immunology Service of the Hospital Clínic de Barcelona and one of the architects of the first academic CAR-T fully developed in Europe, the therapy request should include "the obligation to demonstrate the expression of CD19, especially in lymphomas. I understand that there has been time to fine-tune the anatomopathological studies, so it should be a

to show the expression of CD19 in the tumor cells

, and as I observe, there is still a high percentage of centers that do not perform this determination in the tumor".

center ) and a second by the group of experts at the national level.

"It seems appropriate to me that there is a committee at the global level if some community does not have a specific one, but I do not understand the need for double approval," he says.

Facing a possible optimization or restructuring of the plan, this specialist proposes to "agree" to

And if it is finally decided to continue with the global committee of experts, of course the number of specialists that make it up will have to be multiplied, he stresses.

Another of the group's experts makes a similar reflection, José Luis Poveda, head of the Hospital Pharmacy Service at the La Fe University and Polytechnic Hospital, in Valencia, who suggests that "the functions of the committee should change. The centralized evaluation made sense for a principle of prudence in the face of a new advanced therapy and as there are few authorized centers.However,

once experience has been gained, authorization should be decentralized and left in the hands of the communities

, and the group of experts remain as an advisory committee to the general strategy, both for the elaboration of protocols and for the estimation of training needs, information systems and patient follow-up".

be enough and, furthermore, this would reduce the time

between indication and approval". Shortening the time is, in the words of this expert, "especially important in patients with leukemia, due to the aggressiveness of the disease and the difficulty of maintaining the patient without chemotherapy prior to performing leukapheresis.

Disease progression without chemotherapy may render eligible patients at the time of indication who are no longer eligible in 2-3 days (blastic leukocytosis, infections, decreased T-lymphocyte count).

Every day counts," she recalls.

CAR-T versus BCMA is approved for multiple myeloma

," warns Manel Juan, "there will be a

in the volume of patients that can be treated with advanced therapy."

They will also increase with the impending mantle, follicular, and second-line lymphoma approvals for DLBCL.

The data reflects that until now the experts have returned their assessments with the required speed, aware of the importance of scratching as much time as possible.

-between five and 10 cases per month- and are completed in spare time, in a totally altruistic manner, regardless of the current workload and work commitments, as well as weekends, vacations and holiday parties

A group that must grow

"There are more and more centers and requests, while the number of experts is limited.

, in order to combine our working life with this task," argues Poveda, who proposes redefine functions to make a "more strategic and operational" group.

Its objectives would be to evaluate the results of each regional committee;

provide transparency in the process, with "a more agile information system than the one we have, so that it helps us to deepen the learning of the prescribers themselves", and establish criteria that guarantee cohesion and equity in access to treatment.

Pérez Simón contributes another reflection for the debate: "The path followed seems reasonable to me; the committee is part of that trajectory and I would maintain it. It is clear that it has contributed to making CAR-T therapy accessible in a very short time for all citizens, with

guarantees of equity and security

. When decision-making is not centralized, there is a risk that it will no longer be homogeneous and I don't think that should be compromised".

The hematologist adds that he also understands "that this group of experts must be increased in number, and it may be that certain regional committees overlap with the central one. In the case of Andalusia, we have tried to focus on ensuring that the documentation sent is correct, but without going into much in the detail, because we understand that it is precisely what the group of experts does, so that the process does not lengthen. Ultimately,

everything can be meshed, if we are clear about the functions and avoid redundant ones

Sometimes, the requests that the Ministry's group of experts must assess involve a complexity such as that of this patient, referred by the Galdakao Hospital (Vizcaya).

The hematologist who submitted the request, Eukene Gainza, reports that "this is a

. In a second biopsy, it was determined that he had angioimmunoblastic T lymphoma and received an allogeneic transplant of hematopoietic progenitors".

Two years later, the patient relapsed and when a

However, the hematologist considered that having received the allogeneic transplant and since he always had DLBCL ("with

CD19+, as the biopsies showed

," she stresses) he should be evaluated to receive advanced therapy.

"Actually, he had already been through one treatment for Hodgkin lymphoma and another for T-lymphoma, four lines of chemotherapy in total."

The specialist prepared an

where they justified that "assuming that the histology from the outset was a large B-cell lymphoma in a young patient who maintains a very good general condition, we understand that he is a candidate for CAR-therapy." T".

Finally, he was successfully infused with axi-cel.

spectrum of lymphomas that pose some diagnostic difficulty,

it is preferable to ask and assess each case, as occurs, for example, when involvement of the central nervous system appears, or if a patient with an autoimmune disease has been stable for many years," reflects Eukene Gainza on an