"Citizens of the Reich": Germany is an occupied country run by Freemasonry

The German "Citizens of the Reich" movement adopts ideological tendencies that are described as extremist. It considers Germany's current existence illegitimate, and its members give up official identification papers and issue others for their movement, just as they deny the Holocaust. 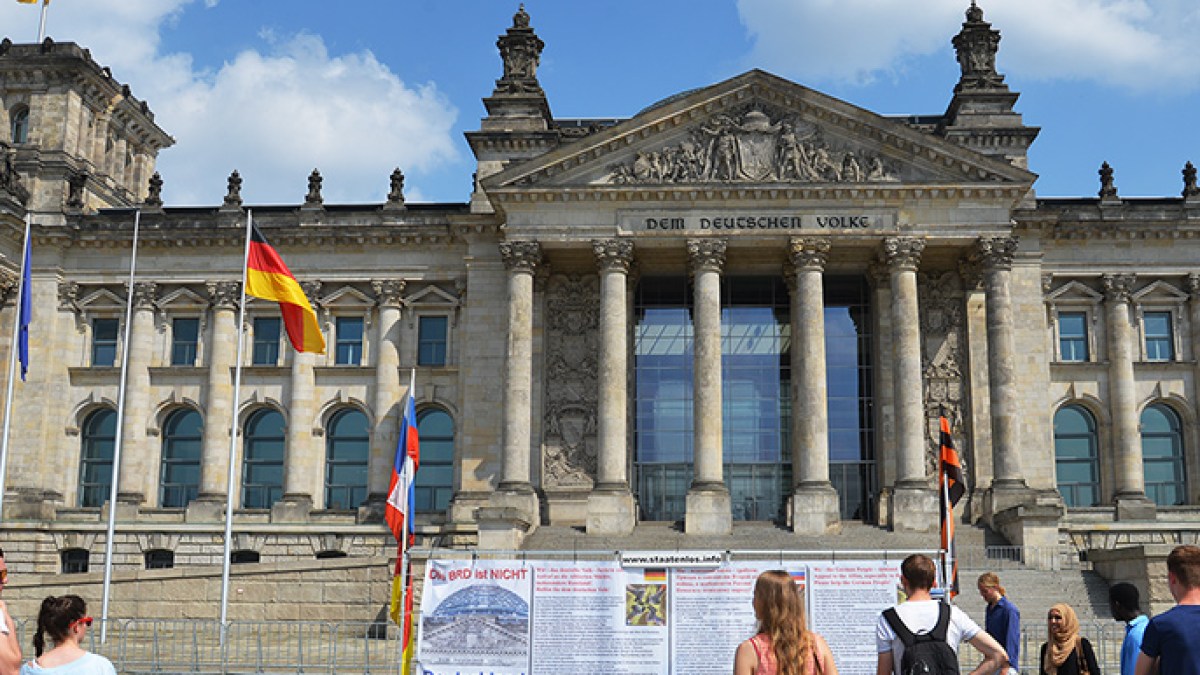 A German political movement that includes various groups, whose supporters believe in the continuity of the German Empire and refuse to recognize the current state, its constitutional and legal systems, and its democratically elected representatives.

The "Reich Citizens" movement was founded in the eighties of the last century, and there is no official statistics on the number of its supporters, but the security authorities estimate them to be about 1,100 people, of whom three hundred are in the states of Mecklenburg-Vorpommern and Brandburg.

The movement - also known as "Citizens of the German Empire" - began to emerge strongly since 2010, and its supporters practiced violence remarkably during 2016, which made the security authorities change their view of them and describe them as a threat to the security of the country, and German states described the movement as an extreme right-wing group. .

Orientation The right-wing orientation represents an organizing thread for the various groups associated with the movement, whose members represent a mixture ranging from supporters of conspiracy theories to supporters of the extreme right.

Supporters of the "Reich Citizens" call their movement many names, including "citizens of the German Empire", "citizens of the free state of Prussia", "reich ideological cells", "reich government" and "natural persons".

The German Internal Intelligence Branch (the Constitutional Protection Authority) in the southern state of Bavaria classified the "Reichscitizens" as an extreme right-wing movement, considering its ideology to be populist and anti-Semitic.

Within its ideological orientation, the "citizens of the Reich" reject democracy, and believe in the continuity of the former German Empire within the borders of 1914 or 1937. Many groups associated with this right-wing movement deny the occurrence of the so-called Holocaust committed by the Nazi dictatorship against the Jews.

The "Reich Citizens" movement adopts theses that consider Germany's current existence illegitimate, and considers the existing state a limited joint-stock company run by Freemasonry, lobbies and international groups, and that German citizens are mere employees of this company, and that Germany is an occupied country, and its constitution is not valid because it is my hope of the victorious allies World War II, without a popular referendum on it.

Senior German jurists rejected this description, considering that the country got rid of the status of an occupied state with the 1955 agreement, and that the allies’ domination of important decisions over German territory ended with their exit from it in 1991 according to the 2 + 4 treaty that was established to unite the two Germans, and was signed by West Germany, the GDR and the United States. The Soviet Union, Great Britain and France.

These jurists said that the Germans' willingness to participate in the parliamentary elections in 1949 represented an implicit acceptance of the country's current constitution, which the Allies did not interfere in its drafting except by proposing its nucleus calling for making modern Germany a democratic state.

In addition to their intellectual convictions, the supporters of the "Reichscitizens" relied on strange legal justifications to justify their activities, which included abandoning official identification papers and issuing imaginary identification papers for their movement, such as passports, flags, currency, slogans, and driving and building licenses for the "German Empire".

Since 2010, supporters of the "Reichscitizens" began to draw attention to them because of the violent criticism they leveled at representatives of the German state, and after six years they recorded increasing incidents of violence against judges and enforcement officials.

On October 19, 2016, the right-wing movement entered the focus of the German scene, after one of its members in Bavaria shot dead a policeman and wounded three others while the security services tried to confiscate weapons from his home.

And the German security authorities considered that this incident showed an underestimation of the danger of "citizens of the Reich," and the head of the German Police General Union, Rainer Wendt, stated that the escalation of the violence of this movement in 2016 had become a threat to the lives of police officers in their daily work.

The Bavarian and Berlin state police also opened investigations with members of their police on charges of linking to the right-wing movement, and each state dismissed a policeman on the same charge, and the police in four other states opened similar investigations.

Two weeks after the Nuremberg incident, the Bavarian police announced that they had found near the scene a large amount of weapons belonging to the accused of shooting the police.

News/Politics 2023-01-17T15:18:47.037Z
Focus - Germany: the "citizens of the Reich" who do not recognize the Federal Republic
News/Politics 2022-12-17T01:17:26.819Z
[Soup] Why did they dream of a coup
News/Politics 2022-12-17T06:29:31.998Z
[Soup] Why did they dream of a coup
ADS
Business 2023-01-18T12:00:51.044Z
Frankfurter Zeitung January 18, 1923: Eggs only for lunchtime meals
News/Politics 2023-01-13T05:23:09.033Z
INTERVIEW - To discuss cinema and actresses under the Third Reich against Hitler in Nazi Germany, Virginie Girod receives Isabelle Mity, doctor of Germanic studies and German associate, author of "Actresses of the Third Reich, splendors and miseries of the icons of Nazi Hollywood" (Editions Perrin). Less known than Hollywood, we have forgotten that Germany was a great country of cinema during the Weimar Republic, with the UFA "which is the oldest of German production companies, created in 1917 during the First World War to make propaganda films already at the time". "It's the Mecca of European films, it's the best after Hollywood", summarizes Isabelle Mity. It was at this time that films were released that have entered the history of cinema such as "Metropolis" by Fritz Lang or "The Blue Angel" with Marlene Dietrich. The arrival of Adolf Hitler in power, a cinephile in his own way, would radically transform this industry and the lives of artists, actors and directors in Germany, with the advent of the Third Reich.
News/Politics 2023-01-26T17:42:36.022Z
Sending German tanks to Ukraine: a Russian columnist compares Berlin to a “Fourth Reich”
News/Politics 2023-01-27T13:13:22.337Z
Plans to overthrow: 420,000 euros confiscated from Reich citizens
News/Politics 2023-01-27T14:14:13.116Z
Plans to overthrow: 420,000 euros confiscated from Reich citizens
News/Politics 2023-01-14T12:53:23.464Z
Ulrich Weinzierl died: Profession: feature writer