Egypt: A patient's escort assaults nurses in Karbaj and causes one of them to have an abortion

The repercussions of the assault on nurses in an Egyptian government hospital in Karbaj are still continuing. The Public Prosecution announced that it had received a report on the first of December from nurses, workers and a security personnel at Quesna Central Hospital stating that relatives of a patient in the gynecology department had assaulted them, following a dispute between them. 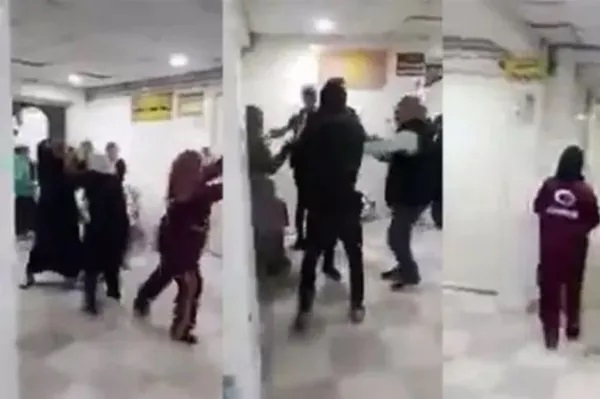 Egypt: A patient's escort assaults nurses in Karbaj and causes one of them to have an abortion

The repercussions of the assault on nurses in an Egyptian government hospital in Karbaj are still repercussions.

The Public Prosecution announced that it had received a report on December 1 from nurses, workers and a security personnel at Quesna Central Hospital stating that relatives of a patient in the gynecology department had assaulted them, following a dispute over treatment procedures.

Among the defendants was an officer who was investigated by the Military Prosecution in the complaint against him.

The Public Prosecution also added that it had moved to the hospital and examined it, and confirmed damages to some medical devices, furniture, and the monitoring device recording device.

It also listened to the testimony of the surveillance cameras official, who stated that there was a backup copy of the recordings of the cameras that monitored the incident.

According to the "Al-Arabiya" website, the prosecution summoned the hospital director and the rest of the parties to the incident to hear their statements, pointing out that investigations will be completed.

It is noteworthy that the pioneers of social networking sites in Egypt had circulated a video documenting the assault of some people on nurses in Karbaj inside a government hospital, which caused a pregnant nurse to bleed and then aborted her fetus, and injured others.

The incident, according to the assaulted nursing staff, occurred when a person came to Quesna Central Hospital with his wife, who was suffering from bleeding, and asked for her aid.

As a result, according to what the nurses said in the report of the incident, one of them had a miscarriage, in addition to injuring 5 others and 3 workers.

According to "Sky News Arabia," the defendants justified what they did by saying that the nursing staff did not care about the condition of the patient, who was bleeding, and deliberately delayed her assistance.

The Egyptian military spokesman, Gharib Abdel Hafez Gharib, issued a statement in which he said, "The armed forces are closely following what was raised on social media regarding the Quesna Central Hospital incident."

The military spokesman added, "The armed forces affirm their full respect for the principle of the rule of law, and call on everyone to be careful and wait until the investigations are completed."

For its part, the General Nursing Syndicate in Egypt denounced the incident, and called on the concerned authorities to quickly investigate it, in order to take urgent legal measures against the person accused of the assault.

The syndicate also affirmed that it will not give up the rights of its nursing members, "who perform their role to the fullest without default," stressing "the need to address cases of assault on nursing staff in hospitals, as intimidating nursing staff will not be in the interest of developing the health system."

Life/Entertain 2023-01-18T20:37:16.310Z
Safety seminar for home medical workers one year after Saitama doctors' murder
Life/Entertain 2023-01-21T02:58:23.732Z
Ten-minute drive and five-minute run, Shanxi traffic police race against time to save lives
News/Politics 2023-01-25T09:36:26.189Z
Psychological support after the fall of a patient at the Béziers University Hospital
ADS
News/Politics 2023-01-21T04:04:40.921Z
Over the centuries, the fall of the Roman Empire has become something of a myth. It's a bit like the master standard of the death of civilizations. The causes of this fall are numerous: it begins with a political crisis which causes, in domino, other economic, social, migratory, religious and moral crises. American historian Kyle Harper, author of the book How the Roman Empire Collapsed, mentions two other causes that would have caused the fall of Rome: climate change and pandemics. What is it really ?
News/Politics 2023-01-21T11:35:21.181Z
The Doctor: The care of gunshot wounds must be given a higher priority
News/Politics 2023-01-23T00:30:35.859Z
Abortion rights protest march overturns 50-year-old judgment and confrontation across the United States
News/Politics 2023-01-21T06:40:54.571Z
United States: anti-abortion, victorious and combative, parade in Washington
Life/Entertain 2022-12-30T13:11:24.276Z
On-the-spot visit to the emergency dispatch in Chaoyang District, Beijing: Strive for every second of life
News/Politics 2023-01-16T18:36:21.287Z
Abortion in Spain: don't you want to hear the heartbeat first?