There are already dates in Extremadura for the strike of doctors in primary care that the Union of Doctors (SImex) had announced two weeks ago in the absence of specifying the... 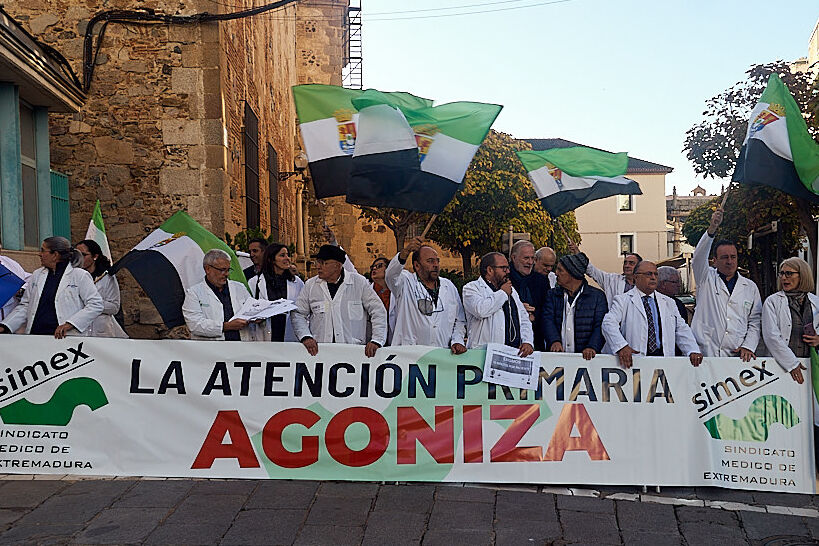 There are already dates in Extremadura for the strike of doctors in primary care that the Doctors Union (SImex) had announced two weeks ago in the absence of specifying the final calendar, since last Thursday the union elections were held in this autonomous community.

Once these elections have concluded, it has been confirmed that

the days before the main Christmas holidays, specifically on December 23 and 30 and January 5

, the strikes will take place, which include

as planned , but which also extends to hospitals.

Extremaduran doctors denounce the "saturation of primary care" and the "lack of specialists" for which they demand that "immediate measures" be taken due to the overload that the Extremaduran health system supports, with "a lot of delay in appointments" and "depleted staff and unfilled vacancies."

If the situation in the sector is not fixed by 'hanging up the robes' on these very important dates,

the doctors will continue the strikes from January 13 and every Friday of the month.

"It was not an electoral strategy. We have plenty of reasons!" The union has published on social networks, which was the fifth formation in number of votes in said elections that the CSIF union won.

the moment, the rest of the unions have not ruled on whether they will support the strike

, although the majority union CSIF did assure that it agreed with the diagnosis of the problems, but believed that it was not the right time to do so due to the high incidence in consultations, especially due to an increase in respiratory conditions, such as the flu or bronchiolitis.

The Simex had approved the strike on November 22 in an assembly by the doctors of the province of Cáceres, where the decision was made by majority.

The following day Badajoz did, although in this case the decision was adopted unanimously.

Among the reasons is the work overload (they denounce that each doctor treats around 70 patients a day) due to the lack of personnel and the "delicate" situation of public health in Extremadura, especially primary care, which is now They will add to the stoppage in hospitals.

This union considers that

and that it has also led to the strike, has reiterated the general secretary of Simex, María José Rodríguez, who has added that the work overload causes doctors "to have the personal uncertainty of wondering if they have made the correct diagnosis".

During the last weeks,

Simex had already been leading several protest actions with the motto

Without doctors there is no health

at the doors of the hospitals of Mérida, Plasencia, Badajoz, Don Benito-Villanueva and San Pedro de Alcántara de Cáceres

, as well as in the Assembly of Extremadura.

Alberto Gómez, a doctor from Extremadura, summarizes the employment situation of the group: "Patients 'pass' through the consultation, and I am forced to see them against the clock. Actually, I don't even see them... there is no time to carry out examinations, much less in elderly people, who require more time, who I don't have because schedules are so tight that they create insecurity and anxiety. Could I have missed something about my patient?", he wonders.

The Extremaduran Minister of Health and Social Services, José María Vergeles, pointed out last week: "They have not sent us the table of demands", so "we cannot negotiate on anything".

the PSOE has shown its "maximum respect" for this proposal, "made by a single union", and has indicated that it is a "shared concern" by the socialists

, which is why the regional Executive, assures, has designed an action plan worth 780 million euros, according to the spokeswoman for this party, Soraya Vega.

The Extremaduran counselor had estimated the number of medical positions to be covered at 73, but the convening union raises this number to 200. CSIF Extremadura has denounced that, globally, there are some 1,724 health professionals missing, including doctors, nurses and pediatricians .