Emmanuel Peterfalvi arrived at the age of 24 in 1991 in Hamburg. Nothing predisposed the Frenchman to become a recognized humorist in his adopted country. The character he created, Alfons, became his… 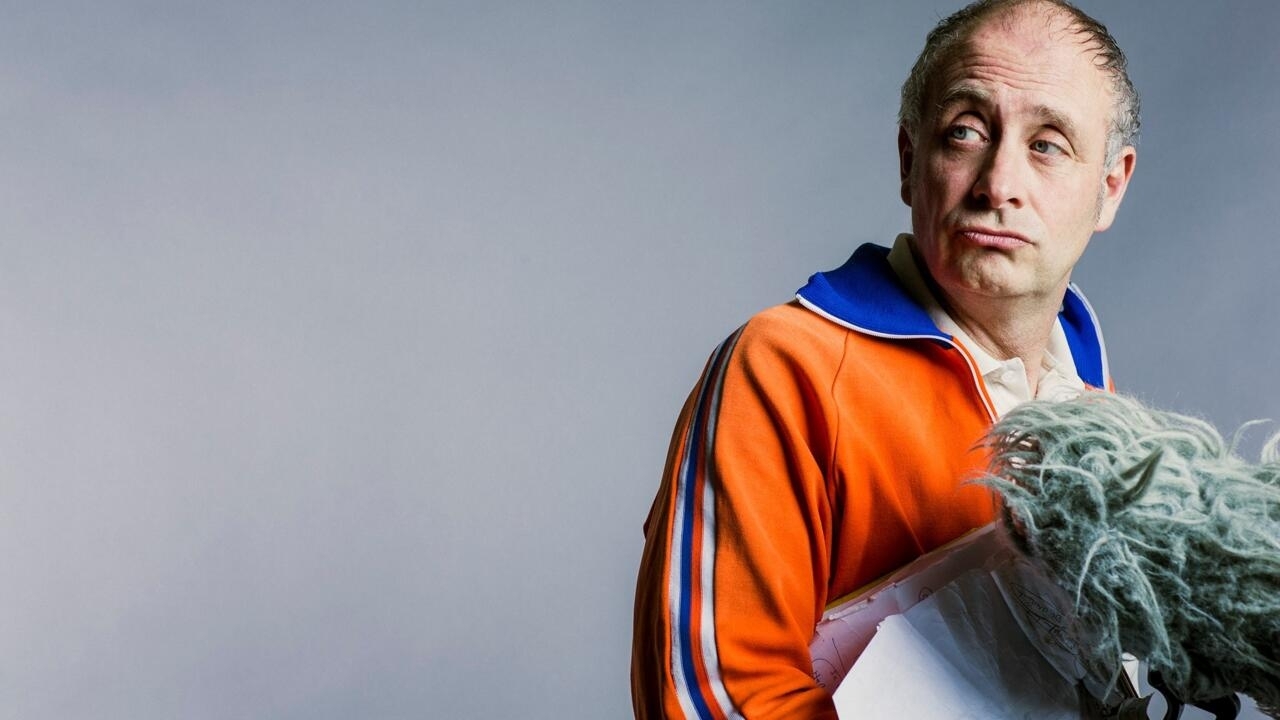 Emmanuel Peterfalvi arrived at the age of 24 in 1991 in Hamburg.

Nothing predisposed the Frenchman to become a recognized humorist in his adopted country.

The character he created, Alfons, became his double;

he analyzes with humor and depth the things of life and the world.

The mayor of Hamburg at the time had taken his finest pen to ask Alfons, the character that the Frenchman has created and shaped for years, if he did not want to become a German.

Installed in the city since the beginning of the 1990s, the comedian has made a name for himself in his adopted country.

But from there to taking German nationality?

Olaf Scholz's letter hanging on Alfons' refrigerator calls out to him every day.

His family history comes to the surface: can the grandson of a deportee to Auschwitz take German nationality without betraying his grandmother who meant so much to him?

One fine day, a fire in Emmanuel Peterfalvi's kitchen seals the fate of Olaf Scholz's missive;

the recipient of the letter turns the page.

A meeting on a TV set with the mayor of Hamburg got the better of the Frenchman.

A handshake between the two men seals the naturalization of Alfons.

The French will still have to complete, like any foreigner,

his file and cramming German history to pass his naturalization test and know by heart the date of the founding of the communist GDR.

The decision was not easy;

I spent two years thinking about it.

All my past came back to me.

It was a complicated journey.

But on arrival, it became obvious.

I have lived more than half of my life in Germany, I am half German

, at the time still mayor of Hamburg, hands over his certificate of naturalization in a ceremony to Emmanuel Peterfalvi and other foreigners who have just opted for German citizenship.

A family history rooted in Germany

Nothing predisposed the young Parisian to such a course.

Admittedly, he learns German as his first language, but the choice is explained rather by pragmatic reasons.

Emmanuel Peterfalvi makes his show a tribute to this woman of character who marked his childhood.

But fate could have been very different.

When Erica learns during the German occupation that her stepfather has been arrested to be deported, she goes to the Kommandantur and demands to leave with him.

She is transported to Auschwitz.

When I was a child, she explained to me that she didn't hate the Germans.

I just want it to never happen again

This family background does not predispose Emmanuel Peterfalvi to come and settle in Germany.

However, he arrived in Hamburg in 1991, but without really wanting to.

After working for the Canal + television channel in Paris, he must do his civil service, instead of the classic military service, with the Première channel, a subsidiary of the French group.

He is finally recruited after the end of his civil service.

His experience at Canal+ benefits him at Première, where we still improvise.

The pugnacity of the young Frenchman is also bearing fruit.

Emmanuel Peterfalvi then left the private channel for the public service to which he has remained faithful ever since.

German viewers discovered him, among other things, during the football World Cup in France in 1998 with his “Télé Croissant” section.

Alfons will then see the light of day.

The character becomes the double of Emmanuel Peterfalvi, with, as an essential accessory, a track jacket made in the GDR.

His all-out searches to unearth an ersatz remained in vain.

This jacket has become the "uniform" of Alfons, whom the very serious daily

From a simple column to its own program

His new townspeople love this somewhat dimwitted character, armed with an enormous microphone resembling a large stuffed animal with which Alfons has long taken street polls.

With difficulty and a terrible French accent, he mumbles questions that seem absurd at

Who is the laziest?

Foreigners or the unemployed?

Should heterosexuals have the right to marry?

Alfons' interlocutors are not wary of this third-class journalist.

Sometimes it was super shocking, but you don't hear much of this kind of talk on TV, because usually the people interviewed control themselves

With these some 300 surveys, Emmanuel Peterfalvi reconnects with his first love when the tape recorder offered by Santa Claus when he was six years old was immediately used for a family survey.

But over time, the comedian wants to renew himself.

He is no longer just the "rubricard" who intervenes in a humorous program;

he lands his own shows.

For more than fifteen years, he has hosted the program “Alfons et ses invited” twice a month on the public television channel SWR and a radio program six times a year on the Saarland public radio.

And he crisscrosses Germany to perform on stage with his various programs.

", the humorist manages the feat of speaking without excessive pathos of the concentration camps and the fate of his deported grandmother.

Emmanuel Peterfalvi evokes with emotion the one who called him "

", a respectable lady who with her erect fly quickly became the darling of the metro trains: with a magnet that she slipped discreetly, the insect moved, seemed to him to obey.

Even François Mitterrand whom she admired and whom she met on several occasions, fell into the trap.

And the talented humorist Emmanuel Peterfalvi makes the audience laugh by evoking the failings of the Germans and the French and the adventures of his naturalization, always with intelligence.

on stage, this hymn of Franco-German reconciliation, the scope of which he explains to German spectators, how a Jewess who had hidden during the war to escape the Nazi occupiers ended up accepting a concert across the Rhine where she was conquered by the reception of the public to whom she even dedicated a song on the spot.

Last year, Emmanuel Peterfalvi was awarded the Cross of Merit, the highest German decoration, comparable to the Legion of Honor.

The text that justifies this award mentions his “

This justification was really very moving for me

That day, his new decoration hangs on his stage jacket.

A little fly, more discreet, is a tribute to his dear grandmother.

Thirty years later, it's clear that I had something to do in Germany.

Because of my family history.

But also because Franco-German friendship is essential for Europe.

And if there are bickering at the top, it's important not to leave that to politicians.

Emmanuel Peterfalvi now wants to go to schools with his show.

After the start of the war in Ukraine, Alfons wanted to act.

A copy of his famous jacket, in the colors of Ukraine this time, was made.

Many people, known or less known, have put on “

the jacket of peace

In total, several tens of thousands of euros were collected for Ukrainian children.