The Harry and Meghan documentary: a classic reality show with high doses of dynamite, self-promotion or victimhood?

At Christmas 2017, five months before the wedding of the Duke and Duchess of Sussex, Queen Elizabeth's Corgis, who had been barking at Harry for 33 years, welcomed Meghan Markle in... 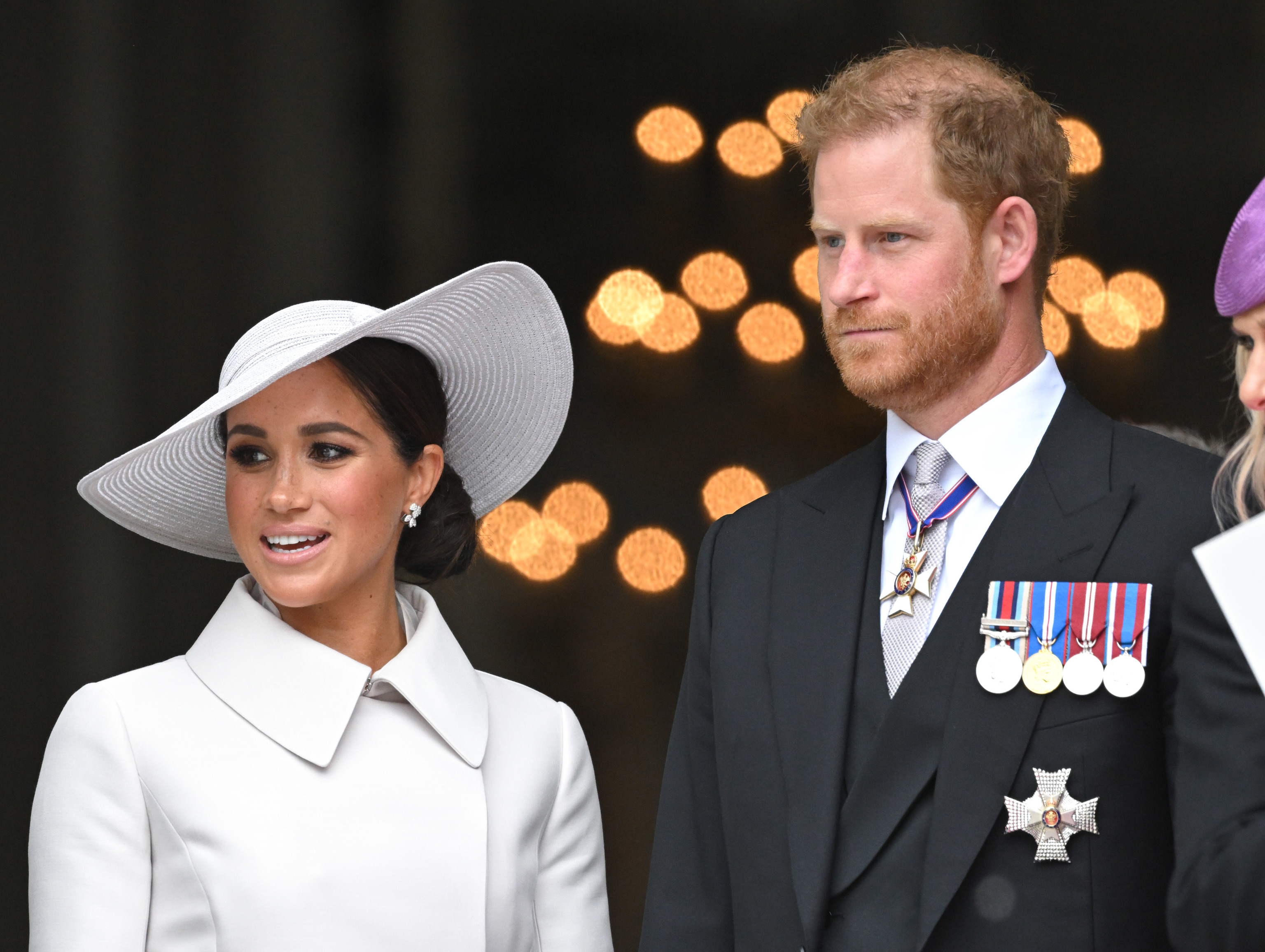 At Christmas 2017, five months before the wedding of the Duke and Duchess of Sussex, Queen Elizabeth's Corgis, who had been barking at Harry for 33 years, welcomed Meghan Markle in peace at Sandrigham.

At the Windsor court, the actress was called upon to

play the role of her life

as long as she renounced having her own opinions.

She would already tell her what she should say.

They were the rules of the House.

Meghan is not one to shut up.

She did not shut up before the string of crass with which the tabloids flayed her and which gave off a whiff of racism and malice.

In January 2020, the ribs of the Crown creaked when she and Harry announced their self-exclusion from the senior royals club to live their lives without the yoke that kept them yoked to Buckingham's cart of easements and tinsel.

Brexit was overshadowed by

a malicious coinage by 'The Sun' newspaper to suggest that it was all Meghan's fault.

In a statement with few precedents, the queen's affection was combined with the severity of the head of state to wish the deserters good wind while continuing to read them the primer.

Less diplomatic was the royal source who said the queen was 'heartbroken', adding: "They've won, haven't they? They wanted to have her cake and eat it. They already have it."

The cake was the contract that his company Archewell Productions signed with Netflix in March 2020, six months after the couple settled in California.

It was about producing documentaries, feature films and children's stories.

Ted Sarandos, director of content and CEO of the platform, was happy as a partridge: "Incredibly proud that they have chosen

Netflix as their creative home

and excited to tell stories with them."

But nothing of stories, last year they opened the doors of their mansion of 15 million dollars in Montecito for a docuseries about themselves and their disagreements with the Windsors.

Although it is not clear how much of their home life the couple is willing to share, it is certain that for two years they have been recording

So when the Queen's Jubilee came around in June, the Crown banned them from filming the celebrations, Meghan and Harry took a low-key role and missed key moments on Buckingham's balcony.

In an interview with the digital magazine 'The Cut', the Duchess revealed that the series will tell the couple's 'love story'.

As if it were highly sensitive material, Netflix has produced the series with opacity and secrecy.

Although its title was going to be 'Chapters' (Chapters), nothing indicates that it has not been changed to 'Drums of War' or 'Merry Christmas'.

It is about generating expectation, giving people talk, feeding intrigue, prefabricating uncertainty as a marketing strategy to increase the audience and make profitable the

that the platform has invested in the project.

And bingo!: few series have given so much talk before its premiere.

Netflix reveals the first images of the Harry and Meghan documentary

At first the producer and the Sussexes wanted to open trenches and shoot at the mass.

presenting themselves as victims of merciless charlatans".

But after the death of Elizabeth II, the couple panicked and tried to build bridges, add water to the wine of the grapes of wrath and minimize much of what they had already said in the series about Carlos III, Camila, William and Kate. .

The fly on the wall

This change in attitude generated tensions in the production, the dukes were "in disagreement" with the recorded content and wanted to

discard takes and record others.

The continuity of filming was in jeopardy.

Harry and Meghan wanted to delay it, even cancel it;

but Netflix was anxious to have it ready for its December premiere.

Netflix CEO Ted Sarandos has taken the pressure and supported filmmakers who wanted to keep the content.

But earlier this year, Page Six posted that there were many doubts about its continuity: "Although the story has come out of their own mouths,

Harry and Meghan are terrified

and want to tone it down. Harry is now scared of the flies on the wall ".

Netflix bosses first blinked uneasily and then, following the criticism the platform received for its fifth season of 'The Crown', they decided to push back the planned release date.

Garrett Bradley, the original director, left the project due to his disagreements with the couple.

His place was taken by

director of the last season of 'The Handmaid's Tale' and responsible for other films about oppressed women such as 'Girlhood'.

"It's nice to entrust our story to an experienced director whose work I admire, even if it means it's not the way we would have told it. Our story is being told by someone else and that means it will go through their lens," Meghan said.

According to the British press, the couple and Garbus have also had

their ups and downs.

On March 8, 2021, Meghan and Harry came out to Oprah Winfrey and revealed untold miseries of the royal family.

If, 25 years earlier, Lady Di's interview on the BBC's 'Panorama' program opened the monarchy on the channel, the Sussexes were not far behind.

Harry's popularity ratings plummeted to 13% and Meghan's to 8%.

With the Netflix series they return to the old ways and the broadsides.

Little has been leaked about the final content and the information has been administered with a dropper, it is unknown if it will be a classic reality show with high doses of dynamite, a self-promotion or victimhood documentary or a mixture of both.

We don't know if the pair will raise blisters charging at Buckingham.

Nor if his children Archie and Lilibet will appear, but after ponying up a hundred million dollars

it is foreseeable that Netflix will not disappoint

a rock that is already savoring the morbidity.

Before its premiere, the docuseries has made waves on both sides of the Atlantic and

it is natural that London is nervous.

In addition, the publication in Penguin of Harry's memoirs, provocatively titled 'Spare', is imminent.

The book was scheduled for publication this autumn, but the duke - who has written it as part of a £40m contract for three titles - asked to make some significant changes.

Both vitriolic initiatives, docuseries and book, remove any possibility of a reconciliation with the royal family.

In July 2016, Meghan Markle, then 35 years old (three years older than Harry), was a famous actress, activist, blogger -foodie and traveler- and owner of Bogart and Guy, two beagle dogs.

On a business trip to England, she came to Wimbledon to support her friend Serena Williams.

There, on the green lawns of the All England Club, Violet Von Westenholz, public relations for Ralph Lauren and childhood friend of Prince Harry, arranged a date between

the freckled prince and the ultramarine showgirl.

It was an evening à deux in which

by the girl's natural beauty, her personality, idealism, balance and curiosity.

Virtues all together that gave plenty for a crush intensively exploited by the tabloids.

survive at all costs

entrepreneurs of their own lives,

in a business that basically consists of making cheap shots profitable for a dynasty that has proven its resilience for a hundred years.

He survived the scandalous abdication of Edward VIII in 1936 and his dangerous dalliances with the Nazis, the Republican cabinets, the rebellion of Princess Margarita, the divorces of Elizabeth II's three children, Lady Diana's funerals, to the irreverent barrages of the tabloids, to the puppets of Spitting Image and to the punk coarseness of the series 'The Windsors'.

In these hundred long years, the Windsors have prospered while their relatives from other great dynasties have been overthrown, assassinated, or exiled.

They have overcome family disputes, calamities and betrayals.

They have never forgotten this commandment: survive at all costs and whatever it takes.

Although with a stiff upper lip, they will survive the Sussexes docuseries.

However, Meghan will always carry the same cross that poor Yoko Ono has had to carry all her life, the Japanese as the false cause of the dissolution of the Beatles and the Californian as allegedly

responsible for the dissolution of the

(the Fabulous Four) who once formed with William and Kate Middleton.