On December 1st, the first day of winter, the temperature in Seoul plummeted to minus 9.4 degrees Celsius. Seoul has accumulated 116 years of meteorological observation data since 1907, the era of the 'Korean Empire', and it is the 5th coldest 'start of winter' of all time among the records of the past 116 years. 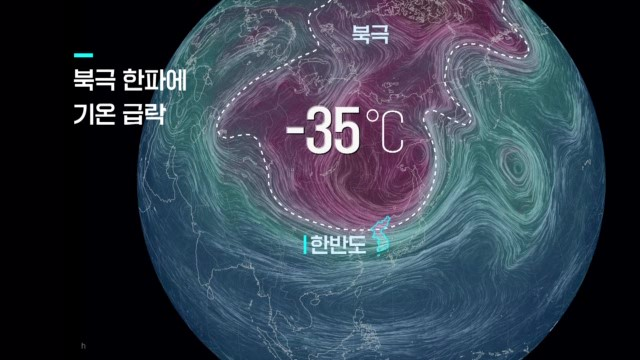 On December 1st, the first day of winter, the temperature in Seoul plummeted to minus 9.4 degrees Celsius.

Seoul has accumulated 116 years of meteorological observation data since 1907, the era of the 'Korean Empire', and it is the 5th coldest 'start of winter' of all time among the records of the past 116 years.

Of course, the temperature in Seoul can drop below minus 20 degrees Celsius in the middle of winter, but it is not common to experience such a cold from the first day of December.

Not in the last 26 years has a winter started this cold.

A cold wave warning is the upper level of a cold wave advisory, and is issued when the lowest morning temperature drops by 15 degrees or more overnight.

This type of cold is 'unusual'.

The direct cause of the cold wave is that the cold air from the north has come down to the Korean Peninsula.

Currently, cold air of minus 30~35℃ is distributed at 5km above the Korean Peninsula.

If you look at the source of this cold air, it's a cold air mass that has been created from above the North Pole.

As you can see in the picture, the purple area from the north pole is filled with cold.

Why is the arctic air coming down?

You have to change the question and think about it to get the answer.

Why doesn't the arctic chill usually come down?

Normally, the cold of the Arctic is trapped in a giant whirlpool called a polar-vortex.

The stronger the rotational force of this vortex, the colder the air is trapped in the North Pole and cannot come down to mid-latitudes like Korea.

The problem is that the Polar Vortex has now collapsed.

As the structure of the polar vortex collapses, cold air from the Arctic is leaking to mid-latitudes like Korea.

The stronger the rotational force of the Polar Vortex, the more it maintains a circular shape like a typhoon.

When polartex's strength weakens, its edges become wavy, and this collapsed shape descends to the mid-latitudes.

Because the edge moves meanderingly, it is also expressed as meandering (蛇行: long snake four, walking around).

Polar Vortex's entourage to the Korean Peninsula will continue until tomorrow (December 2).

[How in the future?]

On Saturday, December 3, the trough that creates rain clouds will pass through the north and the chill will recede.

However, snow is expected in the metropolitan area and Gangwon-do on Saturday.

As the days get longer, you may feel less cold.

First of all, the Meteorological Administration predicted that this December would be colder than normal when announcing its long-term forecast for the winter season on November 23.

**If the 'Go to view' button is not pressed, copy and paste the address into the address bar.