The cold arrives: What does the breaking of the polar vortex mean? Will we have another Philomena?

After an almost endless summer with very high temperatures that have continued through the beginning of autumn, the cold finally arrives in Spain. The last week of November... 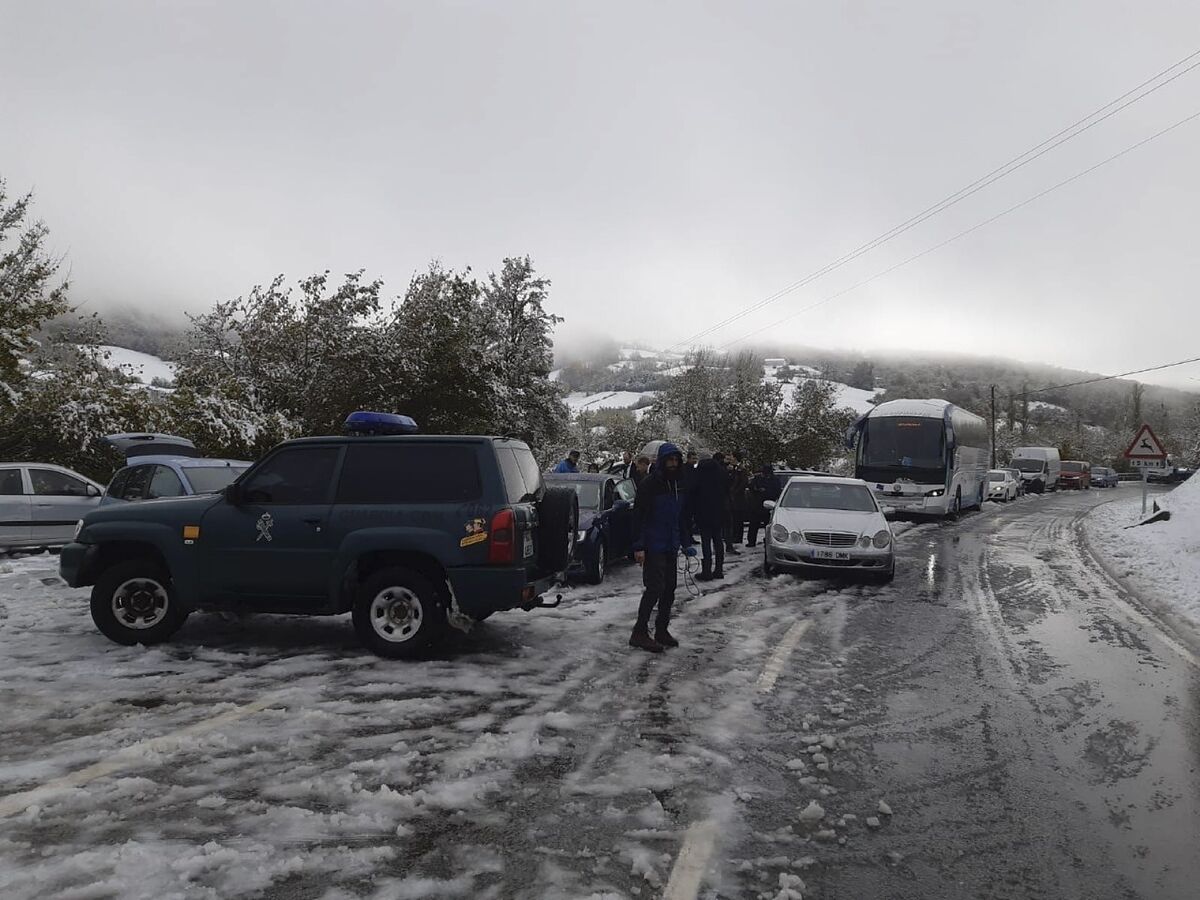 After an almost endless summer with very high temperatures that have continued through the beginning of autumn,

the cold finally arrives in Spain

The last week of November is marked by a drop in temperatures, especially at night, and by frost in many parts of the country, although as Rubén del Campo, spokesman for the State Meteorological Agency (Aemet), and Mar Gómez, responsible for the meteorology network at www.eltiempo.es,

we are not facing a cold wave, but rather normal weather for this time of year.

However, in the coming weeks we could experience an episode of intense cold if, as forecasters have warned, the so-called

What is it and what will it mean for Spain if this happens?

Tomorrow, by the way, the meteorological winter begins, whose calendar is different from that of the official winter since it covers from December 1 to February 28.

What is the polar vortex?

It is a very intense wind current that is usually generated in winter and that surrounds the Arctic.

It occurs in the stratosphere, that is, in the upper layers of the atmosphere (between approximately 15 and 35 km altitude), not near the ground: "That is why its full name is stratospheric polar vortex. On many occasions these winds "they are especially intense. The cold air remains confined to those arctic latitudes, and when this happens, winters are cold in the Arctic and milder in the rest of the northern hemisphere," explains Rubén del Campo.

There is a polar vortex both in the north and in the south: "It also occurs around Antarctica, when it is winter in the southern hemisphere, and it is usually much more intense than in the north; that is why the ozone hole is so marked there , because there is no air exchange; it is as if we had a fence and the cold air was confined and could not come out," compares the Aemet spokesperson.

For her part, Mar Gómez recalls that "polar vortices are not something new, it is a meteorological feature that has always been present although they have recently become popular. The term

refers to the air flow in an anti-clockwise direction which helps keep cooler air near the poles.

Many times during the Northern Hemisphere winter, the polar vortex will expand, sending cold air south with the jet stream.

This occurs fairly regularly during the winter and is often associated with large bouts of arctic air in the US."

What has to happen for there to be a break in the polar vortex?

"It is a complex issue but sometimes it happens that, due to certain configurations of the atmosphere or atmospheric situations that occur in winter in the troposphere [the lowest layer of the atmosphere, which extends from the Earth's surface to the beginning of the stratosphere ] For example, a powerful anticyclone is formed in Siberia, which causes a very important and sudden rise in temperature in the stratosphere, which we call

. In a matter of hours or days, the temperature rises 30 or 40 degrees. And when this happens, the polar vortex becomes destabilized, it can even change its direction of rotation (normally it does so in a clockwise direction) or it can break, that is, that air belt around the Arctic ceases to exist as such and

there may be a flight of cold towards lower latitudes

If that leak occurs, the very cold air can reach any area of ​​the northern hemisphere, Europe, Russia, Near China, North America or the Atlantic, but "it is not possible to say where it will occur."

What is happening this year?

According to Del Campo, a phenomenon is being observed that is becoming more frequent but this year has been very marked: "Simultaneously we have an Arctic with very little ice, and a sub-Arctic zone (to the south of the Arctic but close) with much more snow than the usual on these dates (the maximum in 56 years).Although it may seem contradictory that there is more snow in the northern hemisphere in a context of global warming, since the Arctic is warmer and with much less ice, it is easier for it to evaporation of water in the arctic oceans, which translates into more snowfall on the nearby land areas."

The snow, he adds, is like a great mirror.

"The heat escapes from snowy areas much faster than in areas where it has not snowed, and by cooling so quickly and with such intensity, an anticyclone is formed that creates a series of disturbances in the troposphere, which are the ones that can propagate to the stratosphere and cause the polar vortex to break.

When will they know if the polar vortex is going to break and if it is going to affect Spain?

"What we see is that the stratospheric polar vortex is strengthening, although it could weaken in mid-December, we don't know yet. If we refer to the tropospheric polar vortex, in that case we do have a situation that points to a certain rupture. The vortex Polar would be affected by the Russo-Scandinavian atmospheric blockade, which will probably spread to the Arctic and Greenland in the coming days. This would cause the disorganization of atmospheric circulation, with cold air descending towards lower latitudes", explains Gómez.

However, the meteorologist points out that "at the moment, although we see this rupture in the lowest part, we cannot know its magnitude and consequences, nor whether, if it did occur, this evacuation of cold air would affect Spain or even a large part of Europe. We have to follow the atmospheric evolution in the next few days."

With respect to a possible break in the polar vortex, Rubén del Campo admits that it is "practically impossible to know if this would translate into a cold wave in Europe that affects Spain, since the weather in our country is conditioned by multiple factors and there are to continue monitoring the evolution of the atmosphere".

What they do know is that "

, but, today, it is only a greater probability, we cannot take it for granted that it will happen" .

Does the polar vortex break happen every year?

"It doesn't happen every winter but it's relatively common, so if it did happen this winter it wouldn't be unusual. It's estimated that, on average, once every two winters a stratospheric polar vortex break occurs, but this varies from decade to decade." another. In the 90s there were not so many, in the first decade of the 20th century they increased and in the 2010s they stabilized," details the Aemet meteorologist.

If it affects Spain, how much would the temperatures drop?

Mar Gómez emphasizes that "it depends on many factors" so it is not possible to know yet.

Rubén del Campo points out that the key is where the cold air comes down.

"Several things could happen so we would have to see where that cold air escaping from the Arctic ends up. If it reached the Iberian Peninsula and other areas of Euroropa,

we would have a sudden drop in temperatures

because we would have an invasion of Arctic air that would probably It would translate into a cold wave with temperatures below zero in many areas, especially in mountainous areas and areas prone to frost," he explains.

"If the arctic air reaches us traveling through the European continent it would be a mass of dry air, that is, it would be very cold but with a sunny atmosphere and no snowfall. But if it goes down through the Atlantic Ocean, perhaps it would be a little less cold but we would have snowfall, probably to the north, but at the moment they are hypotheses".

Is there a chance of suffering another Filomena?

Mar Gómez considers that "at the moment there are no prospects" that there could be another great snowfall like the one that Filomena brought.

"A series of factors would have to come together that, if they occur, require close-in weather analysis. What is clear to us right now is that storms and rains will arrive," she says.

Rubén del Campo recalls that at the end of December 2020 there was a break in the stratospheric polar vortex and part of that cold air reached Spain: "Between the end of 2020 and the beginning of 2021 there was a cold wave that was not too intense but with temperatures that in Places like Reinosa (Cantabria) dropped below -15 ºC in Reyes, but then came a storm across the Atlantic extraordinarily loaded with humidity called Filomena that ran into that cold air and we then had that unusual and unprecedented situation that formed that great snowfall ", recalls the Aemet spokesman.

"By this I do not mean that we are going to have another Filomena because the extraordinary thing and the key to that episode was the storm, rather than cold air, since cold air that had previously been stagnant reaches us relatively frequently."

Are there reasons for alarm?

"There are no reasons for alarm because if a cold wave arrives in our territory it would be a normal situation in winter. From Aemet we continue to monitor the atmosphere and analyze what is going to happen in the coming weeks and if there is an extreme phenomenon, it will be notified with advance".

What is expected to be this winter?

"The prediction of the European Copernicus program foresees a warmer than normal winter, not only in Spain, but in the entire European continent.

The most plausible scenario is that it is warmer than normal

but the probability of a cold wave in the first part of winter it is higher than other winters", sums up Del Campo.

"Regarding the rains, which is what is most interesting to know due to this situation of drought that we have,

, especially in Andalusia, Extremadura, the Central System, Castilla-La Mancha and points in Madrid, which is the area that receives humid winds, so it's good news," says the meteorologist.

For the winter as a whole, he points out that "the prediction models do not agree on whether this winter is going to be wetter or drier than normal in Spain, but we have some clues that point to the fact that in the Balearic Islands, the Canary Islands and areas The Mediterranean could be more rainy than normal, while in northern parts it would rain less than usual, although there is still a lot of uncertainty".

The Aemet spokesman recalls that

2022, "until November, is being the warmest of the entire historical series

(that is, since 1961) and with a certain margin of difference. Since May, all months have been warmer than normal, almost We are surprised that it is cold but it is normal".

"With global warming, the extremes are shifting, heat waves are more frequent and cold waves are less and less but they do not disappear and there we have the example of Filomena, as well as other cold waves that occurred, for example, in 2001, 2005 or 2012".