Artistic events across the UAE on "Union Day"

The UAE is witnessing many artistic, entertainment and heritage events, on the occasion of the 51st Union Day, which are spread across the various emirates of the country, with the participation of stars and artists of different nationalities. At the forefront of these events is the official celebration that will be held at the National Exhibition Center in Abu Dhabi, and 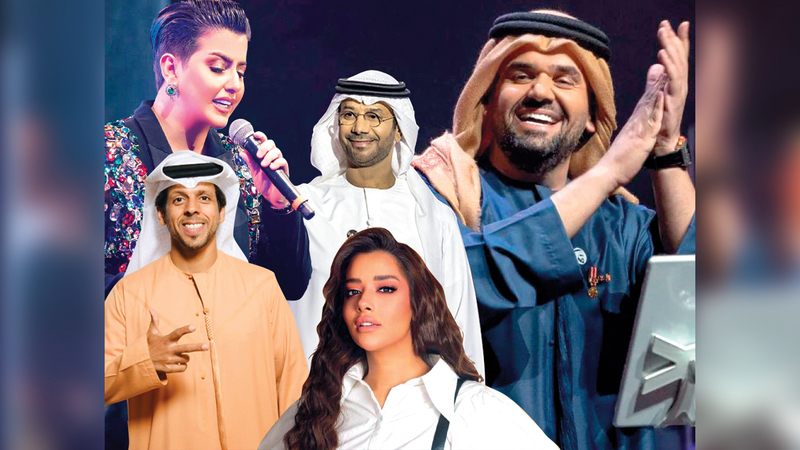 With the participation of stars and artists of different nationalities

Artistic events across the UAE on "Union Day"

Many artistic, entertainment and heritage events on the occasion of the 51st Union Day are spread across the various emirates of the country.

The UAE is witnessing many artistic, entertainment and heritage activities, on the occasion of the 51st Union Day, which are spread across the various emirates of the country, with the participation of stars and artists of different nationalities.

At the forefront of these events is the official celebration that will be held at the National Exhibition Center in Abu Dhabi, and will receive the public from 3 to 11 December. The preparation of the celebration was supervised by the creative and diverse team that supervised the exceptional festive performances for the country's 50th Federation Day last year.

This year's ceremony reinforces the values ​​of unity between the people and the state to celebrate the UAE's contemporary pioneers and the makers of the country's prosperous future.

The Sheikh Zayed Festival in Al Wathba is witnessing a busy program to celebrate the 51st Union Day, most notably the organization of the "March of the Union", drone shows that present dazzling artistic paintings in the festival's sky, fireworks displays, as well as Emirates Fountain shows whose waters rise and are decorated with laser lights derived from The colors of the UAE flag.

And the concert of the artist Belqis and the Yemeni star Fouad Abdel Wahed at Al-Jahili Castle in Al-Ain on the same date.

The department also organizes fireworks displays at 9 pm on December 2, which will illuminate the sky of the Abu Dhabi Corniche, Hazaa bin Zayed Stadium in Al Ain region, and Madinat Zayed in Al Dhafra region for 10 minutes.

The fireworks will also paint the colors of the UAE flag in the Abu Dhabi Corniche sky, accompanied by laser lights, musical performances, and drone shows.

Louvre Abu Dhabi hosts a number of activities, including a dialogue session with a group of senior Emiratis, in which they recall stories and excerpts from the life of the late Sheikh Zayed bin Sultan Al Nahyan, may God rest his soul, in addition to 3 live musical performances by Emirati artists: Hamad Al Tai And number Al-Abri and Rashid Al-Nuaimi.

On the occasion of the 51st National Day celebrations, the Emirates Heritage Club is organizing a 40-foot traditional rowing boat race.

The Emirate of Dubai is witnessing extensive activities to celebrate this national occasion dear to all, the most prominent of which is the concert that will be held in Al Wasl Square in Expo City, and the artists Dalia Mubarak and Aida Al Menhali will perform it, as both of them will present the most prominent songs that the audience loves, along with a group of patriotic songs, in an enjoyable atmosphere. High standard sound and light fittings.

The Global Village in Dubai presents a dazzling show, punctuated by the launch of a large number of fireworks, in addition to the daily distinctive parades and celebrations, on December 2, 2022, and the fireworks are presented at six o’clock in the evening, and two o’clock after midnight.

The Festival City Dubai region will host special activities on the 51st Union Day, including the fireworks event and the “Imagine” show, which includes dancing fountains, as well as watching laser shows in bright colors to the tunes of Arabic music.

Dubai Festival City will host a concert by artist Fayez Al-Saeed, which will be held on December 2, according to what Al-Saeed published through his account on “Instagram”, commenting: “We are waiting for you in Dubai Festival City on December 2, with a special party on the occasion of the 51st National Day.” Fayez Al-Saeed is also participating in a concert. Singing on December 3 in Dibba Al-Fujairah, and he published the promotional photo for the concert through his account on "Instagram".

On December 2, City Walk, an innovative shopping destination, will host the Emirati star, Shamma Hamdan, and will host traditional bands and performances representing the culture and heritage of the Emirates.

The "Legoland Dubai" park is witnessing celebrations that will last until December 4, and includes the construction of the largest model in the world for the flag of the United Arab Emirates with the mediation of Lego cubes and the figure of the victory badge consisting of 108 thousand and 231 Lego cubes, in addition to building many different models, as well as distributing many Prizes and gifts.

The Emirate of Sharjah launched extensive activities to celebrate the "51st Union Day", starting from November 24, 2022, and continuing until December 3, the most prominent of which is the activities of the Sharjah National Park, which started with a musical show entitled "The Sultan of Giving", whose content dealt with the giving of His Highness Sheikh Dr. Sultan. Bin Muhammad Al Qasimi, Member of the Supreme Council and Ruler of the Emirate of Sharjah, since he assumed the reins of power in the emirate, and the development that took place during his reign on the urban, cultural and environmental levels, and the painting (The New Era).

In addition to many activities, including: the snow village, carving the country's landmarks on snow, making models of Sharjah landmarks, and other activities.

The Khorfakkan amphitheater will host a concert that will bring together the artist Aida Al-Menhali and the artist Diana Haddad, on December 3.

It is noteworthy that the proceeds of the runway concerts go entirely to the (Big Heart) Foundation to support children, the vulnerable, the needy and their families in the world.

The Khorfakkan amphitheater also organizes a distinguished national operetta and poetic and artistic paragraphs, in addition to the distinguished Gulf participation in these celebrations represented by teams from the Sultanate of Oman, the Kingdom of Saudi Arabia and the State of Kuwait, as the Gulf countries participate, as usual, the UAE in its celebrations on all occasions, and this indicates the depth of diplomatic relations between countries. .

Return of the "ambush"

The movie “Al-Kamin” returns to cinema screens in the UAE, to celebrate the 51st Union Day.

This will be in the “Vox Cinemas” showrooms in Dubai, Abu Dhabi, Sharjah, Ajman and Al Ain, during the period from 1 to 7 December.

The film is directed by French international Pierre Morel (Tekken Film), and it was released for the first time in 2021 through 185 cinemas, and it is officially considered the highest-grossing Arabic-language film ever in the UAE.

A full crew of Emirati actors, including Omar bin Haider, Marwan Abdullah Saleh, Muhammad Ahmed, Mansour Al-Faili, and Khalifa Al-Bahri, participate in the “Al-Kamin” tournament, as he tells the facts of a true story of three Emirati soldiers who were trapped in an ambush, and are waiting for the support forces to rescue them, after they were attacked. Their armored vehicle comes under heavy attack from a group of rebel elements in a mountain valley.