Between uniqueness and special exhibits, the activities of the fourth session of the Emirates Hobbies and Collectibles Exhibition kicked off at the Culture and Science Symposium in Dubai, which coincides with the celebrations of the 51st Union Day. And the Chairman of the Board of Trustees of the Mohammed bin Rashid Library, Mohammed Al-Murr, said during the opening of the exhibition that « 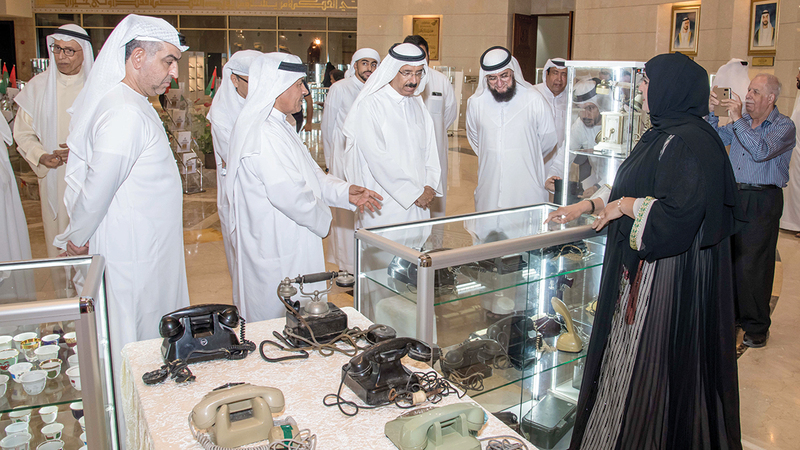 Fathia Al Zarouni records her first appearance with a group of old phones and exchanges.

Between uniqueness and special exhibits, the activities of the fourth session of the Emirates Hobbies and Collectibles Exhibition kicked off at the Culture and Science Symposium in Dubai, which coincides with the celebrations of the 51st Union Day.

The Chairman of the Board of Trustees of the Mohammed bin Rashid Library, Mohammed Al-Murr, said during the opening of the exhibition, “The idea of ​​acquisition enhances knowledge and forms for its owner a broader horizon and a permanent passion for research and tracking, which is an integral part of the crystallization of knowledge.” He praised the exhibits, their diversity and uniqueness, from copies of Emirati coins, or Multiple editions of one novel, souvenirs and other miscellaneous hobbies.

For his part, Bilal Al-Budoor, Chairman of the Board of Directors of the Culture and Science Symposium, said that the diversity of the exhibits in this session confirms that collectors enjoy a special mood that is able to pick up rarities during trips and wanderings inside and outside the country, indicating that participation in the exhibition is an expression of the desire to share pleasure. Acquisition with a wide audience, and to learn more about the cultures of different peoples, and this is reinforced by participation in the exhibition with a group of souvenirs.

While Dr. Muhammad Abdul Rahim Sultan Al-Ulama participates in the exhibition with a unique collection of banknote proofs of the Emirates, Dr. Saeed Hareb presents a collection of souvenir cups for international cities documenting his travels and wanderings, and to introduce the public to some famous landmarks in a number of countries.

As for numismatics expert Abdullah Jassim Al-Mutairi, he participates in a variety of books published by the late Sheikh Zayed bin Sultan Al Nahyan, may God rest his soul.

While Ahmed Saif Al-Hassawi's participation comes with a variety of belongings, which are a set of military decorations for the Ministry of Interior, the former football player, Jamal Ali bin Saho, presents a bouquet of bitter coffee cups that bear many local slogans and symbols.

For his part, the owner of museums and heritage collections that includes masterpieces of Emirati heritage, Hassan Ahmed Busaber, is attending this session of the exhibition with a group of small, rare and diverse pocket knives that have long since disappeared.

Bu Saber conveyed his love of acquisition to his children, so his daughter Nouf, who participated in previous courses, was present with distinctive models of collectibles.

For her part, Wafaa Al-Muhaisen, a fan of reading and reading in addition to collecting collectibles, combined her two hobbies with collecting the novel “The Little Prince” in several languages, and what was issued from this work in terms of shapes, metal pieces, and souvenirs printed with the image of the protagonist, the author, and the plane he pilots.

As for the engineer, Fathia Hassan Al Zarouni, who records her first attendance at this course, she displays a large collection of old phones and exchanges that she acquired locally, or during her various travels and trips.

• "The idea of ​​acquisition enhances knowledge and creates a broader horizon for its owner and a constant passion for research and tracking."

• "Participation in the exhibition is an expression of the desire to share the joy of acquisition with a wide audience."

“Amer” and “Hana” and the title of the youngest

Amer Al Zarooni, who was the youngest participant, returns to the Emirates Hobby Exhibition with several possessions, as he presents distinguished Emirati postal envelopes to visitors of the fourth session of the exhibition.

Amer competed for the title of the youngest participant, his sister Hana Al Zarooni, through a presence that reflects her passion for reading and reading, as she collected collections of “Harry Potter” movies and books, a hobby she has attached to since she was 12 years old.

Hana Al Zarouni said that her admiration for what Harry Potter represents for strength, truth and goodness prompted her to follow all the books, forms and collectibles that are issued and printed about the novel and its characters.