"It was a form of silent suicide": Laeticia Hallyday confides in her tumultuous relationship with Johnny

Laeticia Hallyday was invited on the set of "Quotidien" Monday, November 28 to talk about the exhibition in tribute to her late husband Johnny. The opportunity for the widow of Taulier to discuss the highlights of the rocker's career but also to confide in their life together, made up of ups and downs. 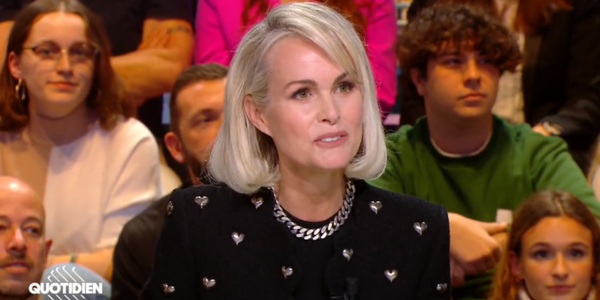 Laeticia Hallyday was invited on the set of "Daily" Monday, November 28 to talk about the exhibition in tribute to her late husband Johnny.

The opportunity for the widow of the Taulier to evoke the highlights of the career of the rocker but also to confide in their life together, made up and down.

The widow of Taulier was on the set of

Monday November 28 to talk about a documentary broadcast on December 8 on M6 and the exhibition * that she thought and imagined in tribute to Johnny, which will first be presented in Brussels, then in Paris in January 2023.

"You can't talk about Johnny without talking about loneliness"

"I continue to feed on him, and these events continue to make him live", begins by explaining Laeticia Hallyday facing Yann Barthès.

Jade and Joy's mother wanted the exhibition to reflect the "extraordinary" artist Johnny was.

The retrospective, which explores the intimacy of the rocker, extends over 3,000m2 and is shaped like a guitar.

"It's a project worthy of his life, his career, the person he was. It's like a show he would have prepared", details Laeticia.

A whole section of the exhibition is devoted to loneliness, a feeling that Johnny hated but that he paradoxically needed to experience in order to suffer and better rebuild himself.

"We can't talk about Johnny without talking about loneliness. We understand better the

man, the artist, his descents into hell, his need to destroy himself to find the light.

He was a being full of paradoxes.

But he needed it to hit rock bottom."

“You can't talk about Johnny without talking about loneliness.

There are images of him in complicated periods of his life.

We understand a little more the man, the artist.

Hallyday reveals with emotion behind the scenes of the exhibition dedicated to Johnny Hallyday #Quotidienpic.twitter.com/FjK5ExHpwU

"We both saved each other"

How did Johnny get out of his depressive states?

How did he climb the slope?

"I helped him a lot", assures Laeticia who tried "not to judge the harm he was doing to himself and to others".

But she was also tormented.

"I was as tortured as him," she confides to Yann Barthès.

"He saved me, we both saved each other. We didn't want to live, it was a form of silent suicide, that's why we understood each other. With such a age difference, our meeting was unlikely".

Together, Johnny and Laeticia have found a balance, which has been strengthened thanks to the arrival of Jade and Joy in their life.

According to Laeticia, the adoption of the two girls repaired Johnny.

"He always suffered from the abandonment of his parents, it repaired him, he made peace with certain demons", explains the widow of the rocker.