With poems, dialogue sessions, discussions, theater and events that build bridges with the other, Sharjah continues the "Guest of Honor" Guadalajara International Book Fair, its rich program that sheds light on Arab and Emirati culture in Mexico. Poetry was attended with the "Voice of the World" evening, which gathered 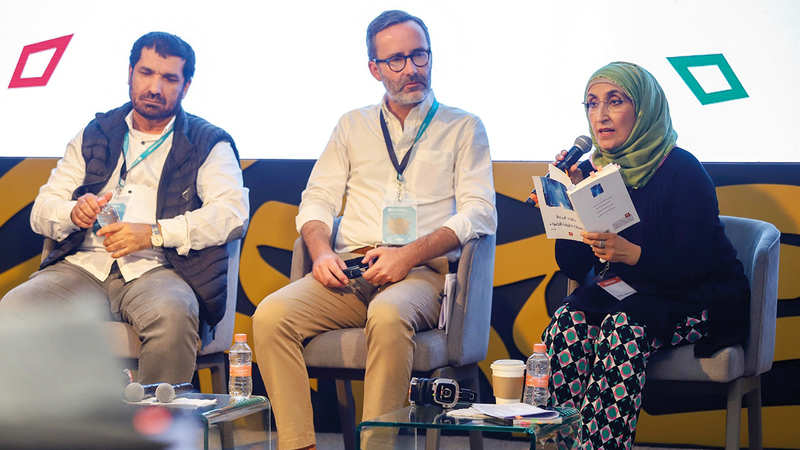 Poems, theater and dialogues within the Sharjah program, guest of honor “Guadalajara Book”

With poems, dialogue sessions, discussions, theater and events that build bridges with the other, Sharjah continues the "guest of honor" Guadalajara International Book Fair, its rich program that sheds light on the Arab and Emirati culture in Mexico.

Poetry was attended by the "Voice of the World" evening, which brought together Emirati poets, Kholoud Al Mualla, Abdullah Al Hadiya, and Mexican writer Diego Games.

The Sharjah pavilion was crowded with an audience eager to see the privacy and uniqueness of Arabic poetry.

Kholoud Al-Mualla said: “Today one of my dreams has come true. I have been dreaming all my life of visiting Mexico. This country is the only one you know before you visit it, and it opens its arms to you from afar. After this visit, I do not know what Mexico will do with my poems and my heart.”

During a dialogue session organized as part of the events, Sultan Al-Amimi, President of the UAE Writers and Writers Union, confirmed that the presence of Arabic vocabulary in the Spanish language not only reflects the history of the presence of Arabs in Andalusia over the course of eight centuries, but also reveals the extent of the cultural commonalities that bring Arabs together with speakers of Arabic. Spanish, especially Mexicans, pointing out that the language has a great impact on overcoming the gap with the other.

He added, "Just listening to a Mexican person speak words of Arabic origin, I feel familiar with him."

This came during a session organized within the activities of Sharjah, the guest of honor of the Guadalajara International Book Fair, during which Al-Amimi spoke alongside the writer and researcher Moises Gardino García, and moderated by Jorge Alberto Perez, and dealt with the history and development of Arabic dictionaries,

Al-Amimi started the session, which dealt with the historical path affected by the Spanish language in the Arabic language, by pointing out that during his visit to Mexico with the Sharjah delegation and his direct meeting with the Mexican people, his knowledge of the kindness and kindness of this people deepened, and he discovered how much they are similar in many of their features to the Arab peoples.

And Al-Amimi indicated that the number of Spanish words whose origins go back to the Arabic language is 4,000 words, explaining that this number of words reveals multiple forms of the influence of the Arabic language on Spanish. The lexical level appears in the words that were transmitted orally and not in writing, in addition to the morphological effect, and the existing influence in the invented language of man, such as the one he devises to denote a sound or movement and is related to this movement, such as the word knocking or knocking in Arabic.

For his part, writer Moises Gardino García stressed, during the dialogue session, the size of the presence of the Arabic language in Spanish, and this presence, despite its strength in revealing the historical cultural relationship between Spanish speakers and Arabs, today faces many challenges, the most important of which is embodied in the image of the Arabs among the Mexicans. Provided inaccurately or clearly by some media.

He said that Mexicans need live and direct communication with the Arab world, such as the interaction provided by Sharjah at the Guadalajara Book Fair, stressing that dialogue and communication with Arab intellectuals, writers and writers would bridge the gap in knowing the essence and originality of Arab culture and its present day.

"Above Earth Under Heaven"

The members of the Rubu’ Qarn Foundation for the Industry of Leaders and Innovators succeeded in mobilizing the Mexican audience of theater, visual and performing arts lovers. The “Vivian Blue Menval” theater, in the city of Guadalajara, was packed with audiences to watch the puppet show “Above the Earth Under the Sky” presented by “Ruba` Qarn” within Her participation in Sharjah activities, guest of honor, Guadalajara Book Fair.

The idea of ​​the show revolves around the suffering of refugee children through the transition from normal life to the impact of wars and the destruction of their homes, schools and culture, shedding light on the contributions of white hands in building and education, and offering a helping hand to children to restore a smile to their innocent faces.