Rossy de Palma: "We women no longer have anything to ask for, now we have to look inside"

Rossy de Palma speaks her own language, but that's not the most fascinating thing. It turns out that everyone understands her, whatever she says and expresses herself as she expresses herself, a kind of voice of... 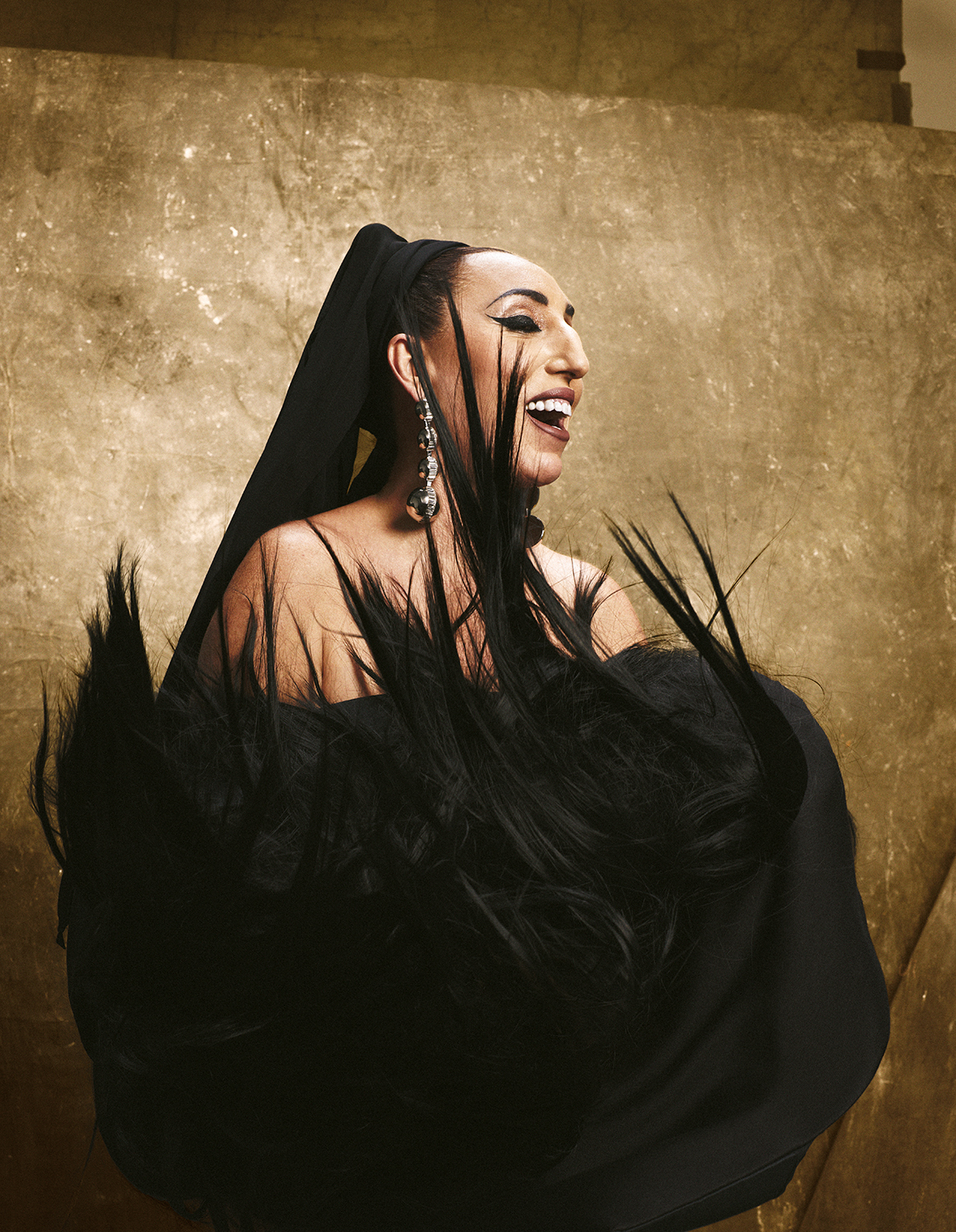 Rossy de Palma speaks her own language, but that's not the most fascinating thing.

It turns out that everyone understands her, whatever she says and however she expresses herself, a kind of voice of popular and elevated wisdom, because she also has that gift, power or grace: that of mixing the divine with the human and the worship with the everyday as if it were programmed for it.

And yet, why deny it, one of her most visible qualities is

Why deny, either, that the woman imposes.

In some ways she is big and in another small.

She arrives in black and white, like from another era, with huge glasses, she says that tired and yet firm, she wakes up, as if she had been doing things for hours who knows where.

It is noon in Madrid and Rossy is going to meet what she later, on social networks, she will describe as family.

The professionals that make up the journey that we will undertake, the one that Rossy gives us: a

tribute to the modern woman from the ancient woman.

An inner journey for all of them that, according to her, women still have to go.

Years before the pandemic, he did a play in Italy called 'Resilience'.

At that time, people didn't talk about it like in recent years. And look now... That play in Italy was a long time ago... Resilience, resilience, there too is a word that ended up becoming fashionable.

Excuse me, did you bring hairpieces?

Rossy is having her makeup done by Kley Kafe and Patrizio doing her hair.

Both appear extolling the artist in one of the photographs.

The artist will appear first as a sphinx woman, somewhat Egyptian.

She will be a caryatid later, practically a sculpture.

And the trend will be observed: for the artist

, as a good dadaist, what is worn on her head is essential.

And if there are no hairpieces, we will have to imagine.

Nothing can please her more.

Rossy orchestra woman, model, actress, stylist, almost as much a photographer as the one who photographs her.

It's no secret that she doesn't shut up.

Do you think that the same thing has happened with the word empowerment as with resilience, that it has become fashionable? It could be... But I would say more than empowered women.

And more than empowerment, I would talk about women.

At this moment it is what is needed.

First, because we are much more empowered than before.

Although then look at what is happening in Iran, where we are seeing brave women fighting against an obscurantism of so many years... Yes, there are many places where women are not empowered and should be empowered.

But here, now, I would begin to use the term womanhood. Why? Because we have spent too much time outside, outside of ourselves, because we have not been allowed to love each other either, as we have now begun to do, and now the duty The greatest thing that touches us is to know each other;

we haven't practiced it.

Empowered, of course, we are better, we are better because there is freedom of bodies and self-esteem has risen, but I no longer demand any attention for women, I reject that kind of miserabilism, that continually saying what we need.

The time for asking is over.

There is nothing to ask for as if we were owed something.

Now we owe it to ourselves.

We don't know much about each other... Introspection? Exactly.

That is what I promote.

Because there has been an emergence and a flowering and, now, already flowered, we do not know the root, nor the subterranean, our depths, so full of contradictions and paradoxes.

The only thing that cannot be allowed anymore is the issue of the pay gap between men and women.

The Rossyan script begins to happen.

The intention of these lines is not to break the magic but to describe it: Rossy appears in flawless black, with his own bracelets there is suddenly a necklace or breastplate, perhaps a corset, perhaps all at once.

With yet another bracelet, a sort of crown has been created.

She herself mentions it while composing herself before the show begins:

the modest and risky woman, the woman from Vejer de la Frontera, and also the anonymous one that anyone of these autumn days, a good black coat is planted to forget a little about everything for a while.

The photographer, Félix Valiente, asks the woman what music she wants to listen to while she works.

She doesn't answer but it's not necessary.

Brave chooses Björk and again everything seems to fall into place when Rossy starts to move.

To dance, to unfold.

Bird woman, my woman of non-pearled barley / My woman with a throat from Valle de Oro / Appointment in the very bed of the torrent / With breasts at night, as in the poem 'La unión libre' by André Breton.

What is the weight of the ancient woman over the modern woman? Well, we have spent so much time trying to get what men had, using them as a mirror that... Then the family, the children, society... We have become Delivered to everything, to sacrifice, to Judeo-Christian guilt, we already have all of that hackneyed.

But then if the quotas, parity, etc., well I don't know, the question is rather who we are, removing the issue of the wage gap, as I said before.

The actress with a Roberto Diz coat and Saint Laurent earrings.

With caftan and earrings, by Schiaparelli.

The actress is wearing a Versace dress and ring, and Cartier 'Clash' necklaces and earrings.

The actress is wearing a total Saint Laurent look.

Rossy tends to do this too, dragging out sentences without finishing them completely, meaning to say but only hinting at it after all.

She says she is a little tired of herself, she says she has already told everything in each interview and that it exhausts her to repeat the usual, the Rosa that was, the Almodóvar girl, the different actress who today, in 2022, has just been named, precisely ,

a position she is particularly proud of and one that makes her feel "entitled to lobby."

It also admits the need to feel "useful" in another field - "another dimension, another level" -.

«Indigenous minorities and vestiges of racism».

And specifically, about Spain, she is especially outraged with

the situation of immigrants.

Or with how immigration is managed in Spain.

Without naming her, of course, as she is, letting ideas hang in the air and rattle.

«I want to honor cultural diversity and, above all, the idea of ​​respecting it.

What issue related to Spain worries you in particular? Without a doubt the situation of immigrants, look at the Melilla fence.

But the biggest problem is that the situation of these people is used as a political weapon.

Nobody is thinking about the people who have died.

They use those deaths and use them as a thrown weapon against the opponent.

When, furthermore, the West is responsible for the current immigration situation.

They went to Africa, they stole the wealth of so many people, they used slave labor and now they are still treated the same.

They come with their own means, wildly, and are not allowed access because they were born elsewhere.

It is no coincidence that in the Instagram biography of this global woman it is briefly stated that she is an artist, without further explanation.

And that the rest of the text be dedicated to naming each and every one of the organizations and institutions with which Rossy has worked for decades.

Organizations working for and in Africa.

"The citizen is helpless"

And that the situation could be called "emparajoda".

«That the people who serve and help us are the worst paid is, they are the heroes of our society, those who work in hospitals, those who care for people and are, on top of that, mileuristas.

This, in my opinion, is even denounceable."

And among Parisian, colorful, sophisticated photos... an image from this summer appears, of Rossy on the beach, between her two parents, on the shore.

You often say that you are a dadaist artist.

Can you explain to us what exactly this means? Dada is not explained.

It is in itself inexplicable and this is one of its foundations, the absurd and the idea of ​​absurd.

Above all it is visual poetry, the way of linking images, how they can be sewn, drawn, the symbolism... It is, more than anything else, everything that the above gives you, the feeling that the observation of everything gives you. previous.

When I was very young, I discovered a Dadaist poem that showed you a dancer from below and the poetry was inserted into the sole of her foot: «Dancer's foot, gauze, tulle, incense...».

I don't know, it was something precious and I got so emotional.

Not knowing it was dada or anything.

But she gave me a dimension: there is another world that awaits me, to which I belong, which is that of poetry, which is the mother of all the arts.

And we are all poets.

I fervently believe, in fact, that you don't have to be an artist to be a poet, because we all have our vital moments of poetry.

But above all, dada is absurd and error... Give me a mistake and I'll give you a hit, I usually say.

All this freedom, this letting go of the feeling that poetry itself asks of you.

this letting yourself be carried away by the feeling that poetry itself asks of you.

this letting yourself be carried away by the feeling that poetry itself asks of you.

As she used to say: ballerina foot, tulle, chiffon... It was the fourth look and the beast subsides, and she even says: «Okay

let Félix say what he wants to do, poor thing, I haven't let him decide anything ...».

We still have to make a video, Rossy, do you want me to go ahead with the questions? No, no, not at all, it's better for me to go straight...