Adel Khamis: I am assured of our young talents with the presence of those who believe in them

The Emirati actor, Adel Khamis, does not seem to be in a hurry to burn the stages to reach his goals. Rather, he is enthusiastic in describing the great diversity that his artistic career has recently begun to witness, and then his intended move recently, and with deliberation seemed remarkable among various dramatic experiences that contributed - according to his opinion - to its impact. 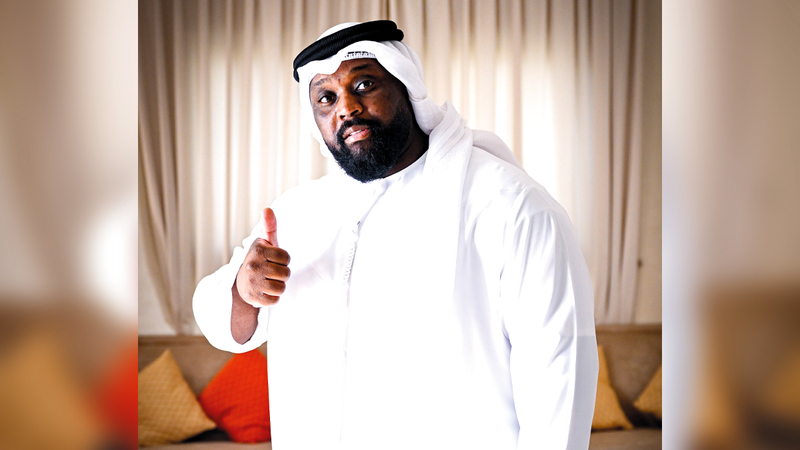 He moved between various artistic experiences that established his presence

Adel Khamis: I am assured of our young talents with the presence of those who believe in them

The Emirati actor, Adel Khamis, does not appear to be in a hurry to burn the stages to reach his goals. Rather, he is enthusiastic in describing the great diversity that his artistic career has recently begun to witness, and then his intended move recently, and with deliberation seemed remarkable among various dramatic experiences that contributed - according to his opinion - to enriching his credit. On the local art scene, most notably the drama experience that the artist entered this year, with his insistence on presenting a renewed and luminous image that reflects his talent and fulfills the expectations of his fans from him.

Khamis also affirms that he is reassured of our young artistic talents, with the presence of those who believe in them.

After his successful experience in the series “Bint Soghan”, in which the artist made a great effort to master his role in the work, and to appear in a distinctive and remarkable way, Adel Khamis, who returned again to the Emirati drama scene to appear in more than one work this year, confirmed: “I had a participation last year. In two works, the series (Acid Sweet), and the series (Aladdin), in which I had an exceptional opportunity first to embody a new and different role from the comedy roles that the audience introduced me to, and secondly to stand alongside distinguished stars such as Abdel Nasser Darwish, Sultan Al-Faraj, Ali Al-Tamimi, Ahmed Al-Awnan and Nevin Madi. And a number of prominent artistic names, who are confident and call for pride, placed them in the person of the work makers led by director Batal Suleiman and Emirati writer Jamal Salem.

He added, "I was very pleased with the good echoes that the work received in the Ramadan drama competitions last year, and its success ably in proving itself and competing with the rest of the Ramadan works for the lead."

On the other hand, and within the framework of his active participation this year in the series “Al Fanar”, Khamis said: “The events of the work with separate episodes take place in an interesting social dramatic framework, to present paintings that embody some aspects of the reality of Gulf society, while most of them deal with a number of current social problems and issues that Concerning the family and ways to deal with it within the context of accelerating events, and with a touch of light comedy close to the hearts.

He added: «The step of this work by writer Jamal Salem and director Tim Al-Taweel is new to me, given the quality of the work with separate episodes and renewable themes that helped me and my work representatives to highlight our capabilities from the window of the diverse personalities that we embodied in each episode, in which I personally went through multiple roles, most notably the role of The officer and the personality of the educator father, the traffic policeman and the passer-by, which gave me more space to diversify my experience and develop my abilities to master every character that I assume.” He stressed, “the value of this kind of light and contemporary dramatic treatments that began to devote movement and diversity that we lacked years ago in the local drama scene in general.”

On the other hand, despite the successive challenges, and the narrow creative space that is constantly assigned to him, Adel Khamis did not hide his happiness with the golden opportunities that some Emirati dramas are opening up for local talents, pointing out that the series “Al Faner” has finally attracted a constellation of Emirati theatrical backgrounds and promising faces, as «The work is full of young people, whose number exceeded 12 talents, some of which came from the Emirati theater, while the rest included Emirati and Arab names that had not been presented before on the local drama scene, which is something that calls for optimism and gives us hope, and we should thank the Emirati writer and producer Jamal Salem who invested This opportunity to attract and highlight as many young Emirati names as possible.

between cinema and theatre

In the midst of his talk about his new experiences, Emirati artist Adel Khamis drew attention to his new experience in cinema and his recent participation as a guest of honor in the movie “How Do You Hear Me Answer”, the Emirati comedy film, stressing the importance of cinematic stations in building the actor’s career and refining his talents despite the hardships.

On the other hand, Khamis was not enthusiastic about talking about the experience of the Dubai National Theater, which he decided five years ago to move away from because of the absence of opportunities available to young people and their unequalness most of the time, stressing: “Because of some, I was denied two consecutive times the experience of theater directing at the Dubai Festival for Youth Theater, so I decided to move away. He added, "But I am active, on the other hand, with the Dubai Al-Ahly Theater, and I recently participated with a group of UAE stars in the play (Model 90)."

Despite the elements of talent and the artist’s experience spanning for years, and his departure from Emirati theater schools, Adel Khamis is still hostage to seasonal productions and opportunities to appear on the Emirati scene every time, which the artist found somewhat unfair to his career and artistic future after all these years.

On the other hand, Khamis remains confident in his talent and is determined to move forward to prove his name on the scene thanks to distinguished and pioneering local names - according to his opinion - in the field of local dramatic creativity, thanks to her confidence in young talents, and her continuous push to lead the future of Emirati drama.

"Light and contemporary dramatic treatments began to devote movement and diversity that we lacked years ago in the local drama scene."

"I played multiple roles, most notably the role of the officer, the father figure, the traffic policeman, and the wayfarer, which gave me more space to diversify my experience and develop my capabilities."