The World Cup imposes his presence.. No voice is louder than the World Cup

With the launch of the World Cup, which began yesterday in Qatar, and will continue until December 18, the global event attracted the attention of audiences of different groups and ages. 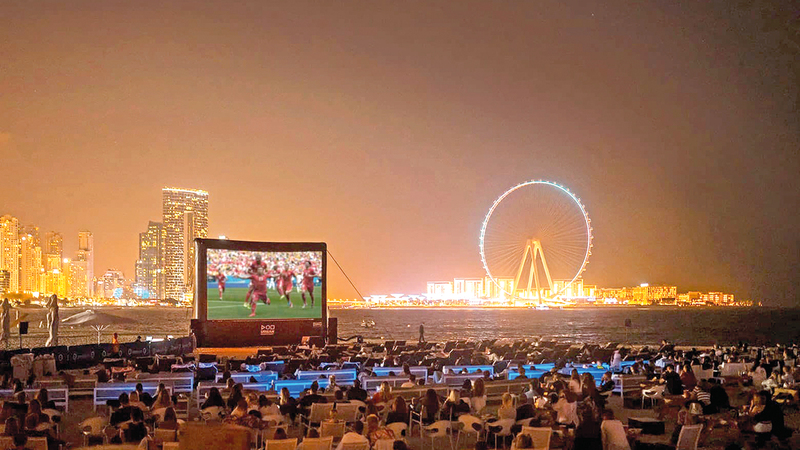 The World Cup imposes his presence.. No voice is louder than the World Cup

With the start of the World Cup, which started yesterday in Qatar and will continue until next December 18, the global event attracted the attention of audiences of different groups and ages. In most of the events organized during its session.

And the "Sheikh Zayed Festival", whose activities of its new session recently launched in the Al Wathba region of Abu Dhabi, and will continue until March 18, 2023, has set up many screens dedicated to displaying the World Cup matches in different places in the festival, giving its guests and visitors the opportunity to follow the matches for free while they enjoy. visit the place.

Dubai was chosen among six cities around the world to host the FIFA Fan Festival, as Dubai Harbor seeks to receive 10,000 fans daily, providing them with huge screens equipped with four-dimensional sound technology.

"Yas Island" also launched a dedicated area for fans, and a series of concerts that allow football fans to follow the most prominent tournament in the world, as visitors have the opportunity to encourage their favorite teams in a group of the most important "Yas Island" sites, including "Yas Links Abu Dhabi". , which hosts the Fan Zone in Abu Dhabi, which includes one of the largest outdoor screens in Abu Dhabi, the "Yas Bay Waterfront" and "Yas Mall", and other international hotels, such as: "W Abu Dhabi Yas Island" and the "Warner Brothers Abu Dhabi" hotel. and Yas Plaza hotels.

These areas also include entertainment events accompanying the event, and food carts that exist throughout the World Cup period.

The Emirates Journalists Association has set up a tent to follow the FIFA World Cup matches at its headquarters in Abu Dhabi near the Cultural Center, under the auspices of Etisalat and in cooperation with the Emirates Heritage Club, inviting its members to follow the matches in a sporty and enthusiastic atmosphere.

In Dubai, the Global Village in Dubai will provide its visitors with the opportunity to watch the matches for free in the “Coca-Cola Square”, in addition to organizing entertainment activities throughout the days of the World Cup that include exciting football challenges, in addition to special food and juices that increase the fun of the matches.

Dubai Expo City, the city of fans, has also been dedicated to welcoming football fans in a family atmosphere, to follow the live broadcast of the World Cup matches, as it will provide an opportunity to enjoy various entertainment activities suitable for all family members in the “Jubilee Park”, in addition to an exceptional experience in “Al Wasl Square.” ».

And "Roxy Cinema" announced that all World Cup matches will be broadcast live in all of its distinguished halls in Dubai, including "Roxy Extreme" in "Dubai Hills Mall", which includes the largest cinema screen in the Middle East, with a total area of ​​​​423 meters. Square, and can accommodate about 154 football teams, with the availability of commentary on all competitions in Arabic and English.

For its part, hotels in the country raced to allocate arenas to watch the World Cup matches for the public, and to provide them with huge screens, with the launch of menus with multiple options suitable for different categories, including the Emirates Palace Hotel in Abu Dhabi, the Hilton Dubai Jumeirah, and Jumeirah Square. Emirates Arena Towers, The Green Planet in City Walk, and other hotels, entertainment and tourist places.

The Sheikh Zayed Festival in Al Wathba has allocated many screens to display the matches, giving its guests the opportunity to follow the World Cup and enjoy visiting the place.

Dubai Expo City »receives football fans in a family atmosphere, to follow the live broadcast of matches in several places, in addition to an exceptional experience in «Al Wasl Square».

Fashion..and the most famous stars

The world of fashion was not far from keeping up with the most important sporting event in the world, the Qatar World Cup 2022, so Louis Vuitton caught the world's attention during a promotional work in which it brought together the world's soccer poles, Cristiano Ronaldo and Lionel Messi, while they were playing chess on the back of one of the famous brand's bags, which is the first The work of the two stars.

The domination of the World Cup atmosphere on the artistic and entertainment scene was not limited to the physical reality, as it also dominated the digital space, so it became the “trend” on social networking sites, and “Trend” topped the participation of the artist, Myriam Fares, in the opening song of the tournament, along with the artists Maluma and Nicky Minaj. Communication sites for days, sparking widespread controversy among those who objected to the performance of Myriam Fares, who found in it a clear imitation of the international star Shakira, and among the supporters who saw that the performance of the Lebanese singer was an expression of the atmosphere of heroism and was characterized by vitality, and that the participation of an Arab artist in such a global work represents An important addition that should be celebrated.