On Gold Day, the national anthem is played 11 times on the podium of the World Jiu-Jitsu Championship

Our national jiu-jitsu team, sponsored by Mubadala Investment Company, is very close to retaining the title of the World Jiu-Jitsu Championship in its twenty-seventh edition, which is currently being held at the Jujitsu Arena in Zayed Sports City, under the patronage of His Highness Sheikh Khalid bin Mohamed bin Zayed Al Nahyan, member of the 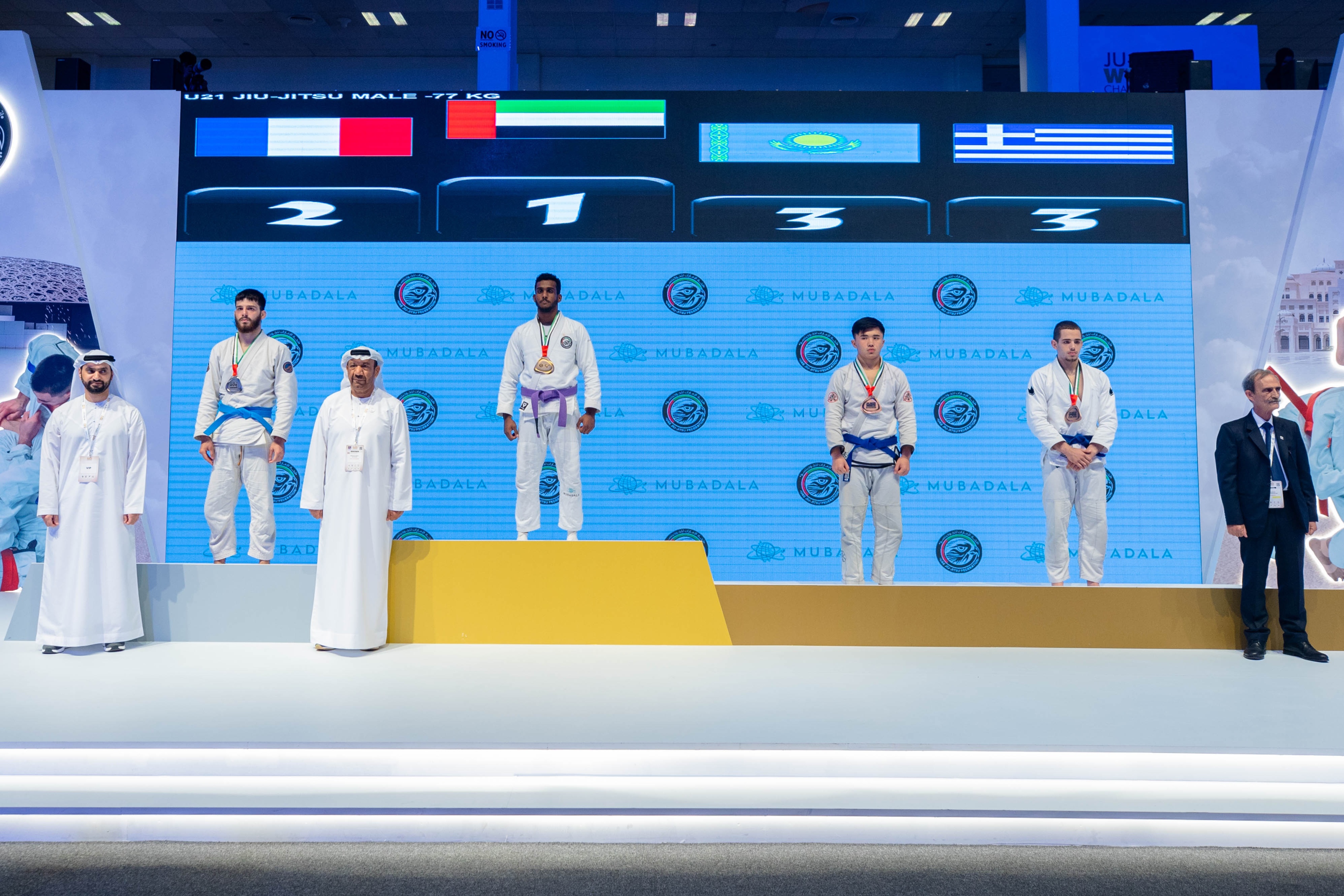 On Gold Day, the national anthem is played 11 times on the podium of the World Jiu-Jitsu Championship

Our national jiu-jitsu team, sponsored by Mubadala Investment Company, is very close to retaining the title of the World Jiu-Jitsu Championship in its 27th edition, which is currently being held at the Jiu-Jitsu Arena in Zayed Sports City, under the patronage of His Highness Sheikh Khalid bin Mohamed bin Zayed Al Nahyan, Member of the Executive Council of the Emirate of Abu Dhabi and Head of Office Abu Dhabi Executive Committee, with the participation of 2,000 male and female players from 70 countries around the world.

The UAE leads the overall total of gold medals with 26 medals, ahead of Kazakhstan with 21 medals, and Germany 16 medals.

Today, the UAE champions for the U-21 youth category managed to continue to shine on the rug and raise the country's balance in the tournament to 63 colored medals, 26 gold, 17 silver, and 20 bronze.

The UAE also won the award for the best team for the under-21 category, and the best national federation that achieved the largest number of gold medals in one day.

With this achievement achieved today, our national team has broken all its previous records, and created a new record that is difficult to break in the future of that tournament. The highest score for the UAE team in the previous edition of the tournament was 53 colored medals, including 18 gold.

In light of today’s results, the team will make a new history by reaching 63 medals, including 26 gold. With this achievement, the date of November 7, 2022 will remain a witness to the most important achievements of the UAE in all its participation in the World Jiu-Jitsu Championship. Won the gold medals with the help of the sons and daughters of the country.

Commenting on the team's achievement, Fahd Ali Al Shamsi, Secretary-General of the UAE and Asian Federations, said: "The champions of our national jiu-jitsu team continue to achieve impressive numbers and enrich the country's balance of colored medals, bringing us an additional step closer to preserving the world championship title for the third year in a row."

He added: "The performance of our heroes today deserves all praise, appreciation and praise.. We are proud of them.. They were up to the responsibility and aspirations. They were well-deserved and absolutely in the youth competitions, which reflects the diligent and mighty work of the technical staff in preparing this wonderful and exceptional generation, which represents the nucleus of the future of Players who are able to continue the march of achievements for the country in the upcoming periods.”

He added: "Reaching the final of a tournament of this magnitude reflects our efforts over the past months, and working with team spirit towards one goal, which is honoring the country and achieving the title."

Khaled Al-Shehhi, the world champion in the weight (62 kg), said: "I am very happy to achieve the gold medal in the world championship, after winning a number of difficult fights, especially the latter, and the encouragement of the fans and the coach's guidance formed an additional incentive for me to persistence, determination and superiority over the opponent .. I dedicate this achievement To the people of the Emirates and their wise leadership, and of course to the Emirates Jiu-Jitsu Federation, which removed the obstacles in front of us in our journey to the championship.”

In turn, Sarah Al Hammadi, who competed in the final for the 45 kg category against her compatriot Hamda Al Shukaili, said: "I could not find words to express my happiness with this achievement and ascending to the podium with the state flag. I congratulate Hamda for the gold and I am proud of what we have presented in the tournament."

Davltov, President of the Republic of Tajikistan Jiu-Jitsu Federation, expressed his great happiness for his country's participation in the World Jiu-Jitsu Championship, noting that the team's players are very happy to participate.

He added, "We achieved only one bronze medal, but I am confident that we will achieve additional medals tomorrow on the final day before the conclusion of the tournament, and despite the lack of medals, we are happy to participate in the world championship."

Davltov indicated that they have a long way to go until they reach the stage of collecting colored medals, but he saw that the technical level is developing, and that the players have provided much better levels than they did in previous tournaments, and that just as they will carry their harvest of medals, they will also carry wonderful memories from Abu Dhabi, which they loved for what they met in. A warm

Madeleine Chukonta, a cheerleader for the Colombian team, expressed her happiness to come to Abu Dhabi to support her country's team participating in the World Jiu-Jitsu Championship from the stands of the Jiu-Jitsu Arena in Zayed Sports City.

She said, "Everything is wonderful here. I am happy with the success of the champions from my country, who have won 10 medals, including 4 gold, silver and two bronze. They presented great technical levels and we are proud of them."

Madeleine added, "It is an opportunity to increase the medal yield in the last moments before the curtain comes down on the championship, and it is important that everyone strive to collect medals and honor our country."

The Ministry of Interior organized a special event to teach shooting on the sidelines of the tournament, which is held daily at Jujitsu Arena as part of many cultural, heritage and sports activities aimed at spreading the culture of shooting and raising awareness of this interesting sport.

The number of shooters in the event reached 600, and people of determination had a share in the participation.

This event reflects the culture of innovation and the promotion of its spread, during which an innovative technology for this sport was presented, which puts the player in front of the challenge of hitting a moving target that is controlled from a distance.