[Exclusive interview] Park Soo-Hong's father "I can't forgive my parents and siblings for treating them as thieves... I did the embezzlement of my eldest son"

On the 4th, broadcaster Park Soo-hong was assaulted by his father, Mr. At the time, there were Park Soo-hong and his legal representative in the prosecutor's office, his brother Park, who was arrested on charges of embezzlement, his brother-in-law Lee, and his father Park. 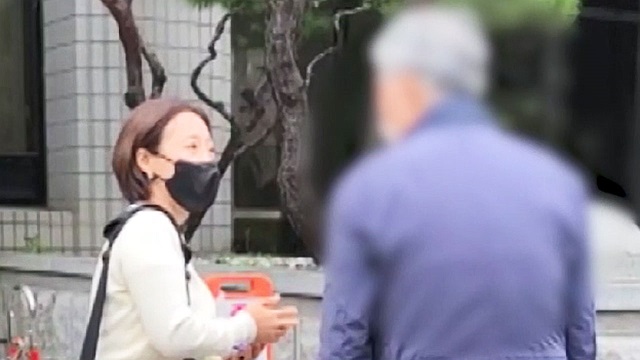 Broadcaster Park Soo-hong (52) was assaulted by his father, Park (84), while being investigated by the prosecution at the Western District Prosecutor's Office in Seoul on the 4th.

At the time, there were Park Soo-hong and his legal representative in the prosecutor's office, his brother Park, who was arrested on charges of embezzlement, his brother-in-law Lee, and his father Park.

It was reported that his father, Park Soo-hong, kicked his shin for refusing to greet him while talking with his eldest son, Park, who came into the investigation room wearing a shroud.

The prosecution's investigation was lame even before the start, and Park Soo-hong, after hearing his father's threatening remarks that he would 'XX with a weapon,' was sobbing and hyperventilated and rushed to the 119th ambulance.

Meanwhile, his father, Mr. Park, and his daughter-in-law, ate at a restaurant near the prosecutor's office.

She communicated with her daughter-in-law, and she did not show significant emotional agitation during the meal.

The SBS entertainment news reporter revealed that he was a reporter and spoke to his father, Park, who returned to the prosecutor's office after eating.

Park showed a vigilant look, "What are you curious about?", but soon started saying, "I'll have to tell the press now too."

Park graciously admitted that he assaulted his younger son Park Soo-hong in the prosecutor's office and said, "If I met my parents after a year and a half, shouldn't I say hello? So, I hit Jeong Kang once. My brother is sitting in a shroud. Do I have to say 'Goodbye' or 'I'm sorry.' During that time, I did the laundry, send you side dishes, clean up, take care of me, but I'm not even a pig and it's right to treat me like that."

When asked, "What part should Park Soo-hong be sorry about?" Park said, "If you have called your 80-year-old parents to such a place to be investigated, you should be sorry."

When the reporter asked, "Isn't that because Park Soo-hong's older brother was arrested by the prosecution for embezzlement and was investigated as a witness?" answered.

According to the complaint, Park Soo-hong estimated that Park's embezzlement amount was 10 billion won over the past 10 years.

However, his father, Mr. Park, vehemently denied the allegations of embezzlement by his eldest son.

His father, Mr. Park, said, "Actually, he (Soo-Hong Park) made a lot of money. It's only been about 10 years. The only thing he made was to buy three apartments. He didn't make that much money."

When the reporter asked, "On the other hand, my eldest son, Mr. Park, has tens of billions of won in real estate, what is that?", the father said, "It is because his eldest son is good at real estate. When Magok was a wasteland, my eldest son took me. He said, 'How is your father here?' The eldest son has invested in it. Eight shopping malls," he said.

His real estate alone is worth 20 billion won, and it is known that his monthly rental income is tens of millions of won.

However, when the reporters checked the registered copies of the shopping malls, the real estate did not have Park Soo-hong's name.

Her older brother, Mr. Park, and her brother-in-law own the majority, and her mother owns a 2% stake.

Park Soo-hong's side claims, "I believed that because my brother said 'It's your shop', but it turned out that my name didn't exist."

It is known that Park Soo-hong's side is claiming that this was a deliberate embezzlement.

The father said, "The fact that my eldest son embezzled, I pulled it out in cash and brought it to him. I gave Suhong 30-40 times a month, 30-40 million won in cash. He hired employees and embezzled tens of millions of won a month? I picked them all up and brought them back,” he said.

When asked, "Is there any evidence for that?", he added, "I haven't changed my cell phone, but if I look closely at my previous cell phone, it may be there."

Finally, his father, Park, asked, "I'm the same son, but didn't you feel sorry for Park Soo-hong when he screamed like that?" "What is pity? He betrayed and ran away and met him after a year and a half, is it right not to say hello? "He didn't bow down.

At the same time, his father, Mr. Park, said, "Ji-hyung used to ride in the morning. (Park Soo-hong) Isn't he a thief's XX? It was made in the same way that it was plugged in, but it's a pity that I couldn't break my leg. What kind of son is that."

Previously, Park Soo-hong filed a complaint with the Seoul Western District Prosecutor's Office in April last year, claiming that his older brother, Park, did not keep the profit-sharing contract (7 to 3) for 30 years from 1991 and used the company's money for personal purposes.

In June of last year, they filed a claim for damages worth 8.6 billion won against the Park couple, and two months later, they claimed 3 billion won more, saying, "We have caught additional circumstances of embezzlement."