This is Oktoberfest: the festival of music, traditional costumes and a highway where beer travels at 25 centimeters per second

A fine rain falls on the Theresienwiese, the meadow where Oktoberfest has been held since 1810, the largest beer festival in the world whose origin is in the wedding between Luis de... 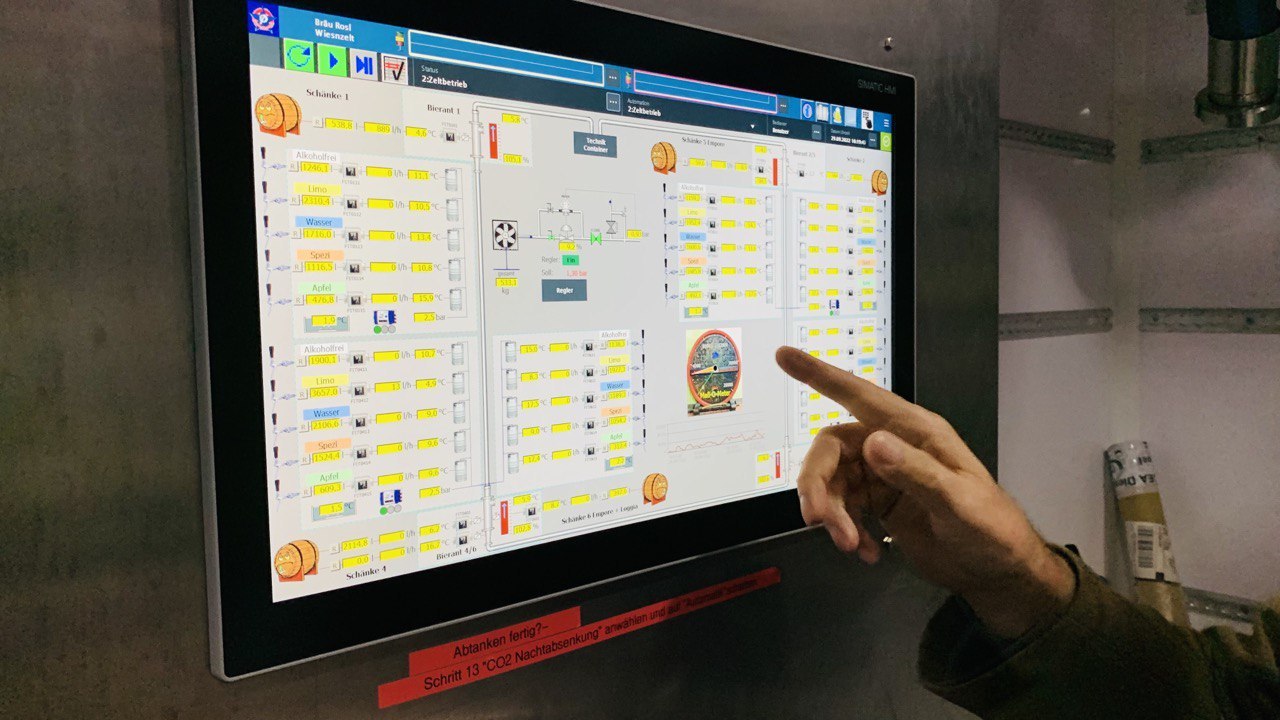 A fine rain falls on the

, the meadow where Oktoberfest has been held since 1810, the world's largest beer festival whose origins lie in the wedding between Ludwig of Bavaria and Princess Theresa of Saxony.

The water does not prevent thousands of people, many of them foreigners, from strolling through the more than 45 hectares that the enclosure has.

Dotted with large and small tents and attractions of all kinds, it is presided over by a majestic statue of Bavaria and a

that on clear days allows you to see the Alps.

the visitors inside the tents, where the party that the people of Munich are most proud of really takes place.

"It's the worst weather in 30 years," confirms

, CEO of Paulaner, "but more importantly, Oktoberfest is back."

And he has done it for everything big: only in that tent more than 7,000 people enter, 1,700 more if we add the terrace.

It is practically impossible to see someone in the tent without a mug in hand, at the table or calling a waiter to order another

de Marzen, the official beer of the festival and the only one that the six authorized breweries can serve.

A few meters from the party,

, a brewing engineer from Paulaner, is hurrying through the last days of what will be his last festival before retiring.

The thousands of visitors to this tent could not toast without the invention of this German engineer: a fully computerized pipeline highway that maintains constant pressure to distribute the precious liquid to the filling stations throughout the tent.

While the band alternates classics from the 80s and 90s, chanted like authentic anthems, with the traditional

(Cheers in German), the beer travels through the more than 200 meters of pipes that run through the tent at a speed of 25 centimeters per second. .

It only takes an instant to reach the faucet, where it fills at a rate of

This system, also present in another of the group's tents, is capable of supplying the thousands of visitors so that their jars are never empty.

"Its peak performance," explains Daebel, "is the first hour of the first day of Oktoberfest:

At five o'clock in the afternoon, the 'speedometer' oscillates between 2,000 and 4,000 liters per hour, which flow from one of the three gigantic 28,000-liter barrels on the roof of the tent.

Each of them takes 40 minutes to fill.

All that beer, made exclusively by the brand for this event, is used to water the products that come out of another of the marquee's vital points: its kitchens.

Dozens of employees work in

to serve the thousands of portions of knuckle, sausage and chicken that are served in the tent.

According to the city data portal, at the last Oktoberfest, held in 2019, almost 500,000 birds were served, which are roasted in gigantic ovens.

Some tents even serve fish or shellfish made using traditional recipes such as smoked herring.

Six jugs in each hand can be carried by waiters.LB

Around 450 people work in the Paulaner tent, which invests approximately two million euros and which begins to be set up in June.

They are in charge of bringing Germanic efficiency to a party that, when it concludes, will have served almost

in that facility alone .

Most waiters and waitresses do it defying all logic: up to 12 mugs of beer, more than 25 kilos, distributed millimetrically in both hands.

Throughout the Oktoberfest, according to official data, more than 7.5 million liters will be served for the more than six million visitors.

When you finish eating, not drinking, the party moves, literally, to the table.

Young, old, teenagers... Everyone gets on the table to sing the songs of the orchestra and toast.

Every three or four songs, the orchestra sings the traditional Ein Prosit again, which the thousands of attendees sing in unison.

Despite the crush of people, and beer, there are no incidents in the tent.

The party is civilized and the desire to have a good time is the common denominator.

But we are talking about Germany, and

nothing is left to chance

A few meters from the tent are the police and health services facilities.

A permanent barracks, built more than a decade ago, and from which

monitor the entire enclosure with 54 cameras, 18 of them high definition.

Another 300 are in charge of the security of the outer ring that surrounds the Wiesn, colloquial name with which the people of Munich call the enclosure.

The station has its own medical center equipped with a device to perform CT scans and attend to jars, most of them fortuitous, that may occur.

In the first week alone there were 100. For those who try to break the law, or are too drunk to continue the party,

there are four cells, three of them individual

, where you can spend some time for reflection (or hangover).

"There are also police from Italy, the Czech Republic, France and the Netherlands," explains

, a police spokesman, referring to the European countries that bring the most visitors.

His mission is to control the usual pickpockets in his country.

Contrary to what one might think, drug trafficking is practically non-existent on the premises: "We haven't had a single case this year," adds Werthmann.

Both inside and outside the tents there is another common denominator beyond beer.

Most tourists, and almost all locals, wear the

: lederhosen for men and dirndl for women.

The first consists of shorts that can be worn with a belt or suspenders, accompanied by a shirt, a vest and knee-high socks.

The price varies from 400 euros in its most classic version to more than 2,000 for one

"It took us three days to do it by hand," says one of the clerks at Anger Maier, one of the most traditional stores, whose activity is frenetic these days.

The one for women has countless variants and also serves to

: if the traditional bow is on the left, it means that you are single;

on the right married or engaged;

The suit is so ingrained in Bavarian culture that many come to their offices dressed in it.

At the end of the day, it's time to spend the afternoon at Oktoberfest,

"a cultural event that has a party part"

, as Andreas Steinfatt defines it.

There, at last, they can do something they've been waiting for two years: raise their mug and shout "Ein Prosit".