'Blonde' and the eternal sexual exploitation of Marilyn Monroe

I was dying for it to be released, to see Ana de Armas in a masterful performance, deserving of an Oscar. For diving, once again, into the myth of Marilyn Monroe and trying... 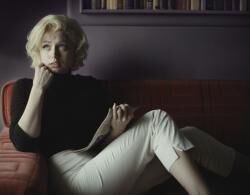 I was dying for it to be released, to see Ana de Armas in a masterful performance, deserving of an Oscar.

For diving, once again, into the myth of Marilyn Monroe and trying to decipher, once and for all, some of the

mysteries that surround it

He was finally looking forward to enjoying that feature film that everyone had been talking about for months.

And the truth is that the film version of 'Blonde', the novel by Joyce Carol Oates,

Bad body because, in my opinion, far from delving into the inner drama of a sick woman battered by life since birth, the film is recreated with unnecessary explicitness in the

morbid portrait of a Marilyn, sexually overexposed in a collection of extremely hard scenes to digest.

It is as if, six decades after her death, her image -and, by extension, that of Ana de Armas- were once again exploited by the same film industry that 'used her' in her day, with the difference that today she he is not here to 'spoil it'.

Because, instead of all those scenes of explicit sexual violence, of tits and 'powdering' -recorded, yes, with a super careful aesthetic- that, apparently, must be 'indispensable' to understand the character, I expected that 'Blonde'

tell me more about Norma Jean

Because, in addition to having an impressive ass and protruding breasts, Monroe was blonde (dyed) but not dumb.

Moreover, they say that she had

, five points above that of Albert Einstein.

And that, in addition to those curves that are so profusely displayed in the film, she studied and prepared thoroughly in the hope that, one day, she would be taken seriously, both in her work as an actress and in real life.

And, now that, finally,

I would have liked to have been able to find out more about this very complicated picture of psychiatric disorders that he suffered from - for which he has been the subject of study in numerous psychology manuals - and that his psychiatrist Ralph Greenson did not hesitate to reveal after his death: bipolar, paranoid and addictive personality;

"People who, like Marilyn Monroe, suffer from borderline personality disorder

but when they have it, they reject it with equal strength because, in addition to not trusting others,

they do not feel worthy of it. him

", Isabel Serrano-Rosa, psychologist and director of EnPositivoSi, told me when I asked her about the actress's problems after seeing 'Blonde'.

So, beyond the extraordinary interpretation of Ana de Armas (I have so many teary eyes to spare Candy Candy style and, above all, so much 'skin'), the masterful photography and all that, I can't help but continue feeling this bad body and I continue to think that Marilyn deserved that, finally, we see her beyond

that physique in which, even today, she is still caged