Scientists from all over the world, from the public and private sectors, investigate aging as if it were a disease. In this context, researchers from the Center for... 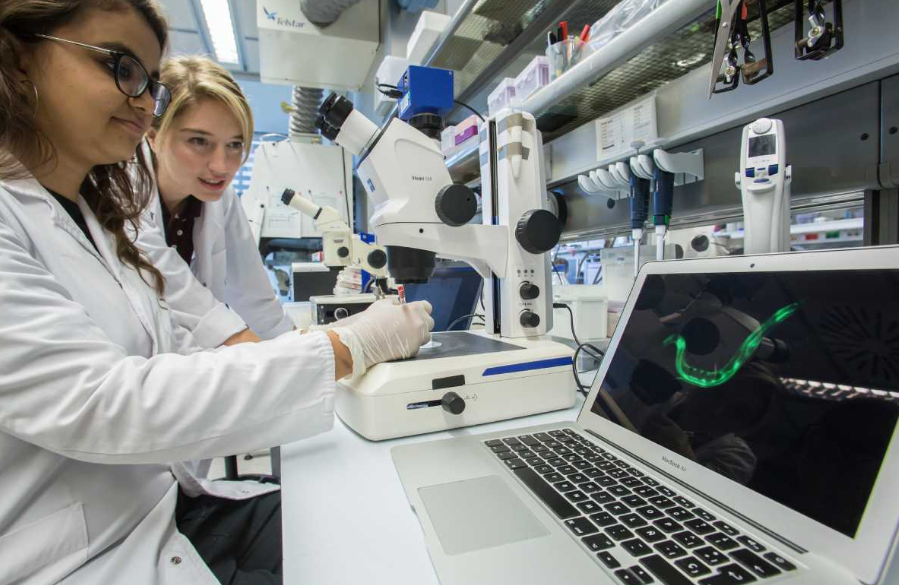 Scientists from all over the world, from the public and private sectors, investigate aging as if it were a disease.

researchers at the Center for Genomic Regulation (CRG) in Barcelona have developed a longevity machine,

, which has allowed them to carry out a study, published in

Specifically, they have found different biological ages at the same time in the same organism, the worm

(it measures approximately 1 mm in length and lives an average of two weeks), something that

suggests the possibility that there is an invisible hierarchical system that regulates the entire aging process.

to study the aging process by analyzing the behavior of nematodes (worms) from birth to death," according to the team.

In this machine, the worms live in a Petri dish under the focus of a scanner that monitors them throughout their lives.

By imaging these worms once an hour for months, the device collects data with enormous resolution and statistical scale.

incorporates a genetic tool that allows controlling the aging rate of nematodes, being able to control the average life expectancy.

for the population in each Petri dish.

The tool works by labeling RNA polymerase II, the enzyme that makes mRNA, with a small molecule.

The worms monitored with this machine are fed different amounts of a plant hormone called auxin, which precisely controls the activity of RNA polymerase II.

By modulating the activity of the aforementioned enzyme, the life expectancy of the worms can be modulated, making it possible to range between two weeks and a few days.

Nicholas Stroustrup, group leader in the CRG Systems Biology research program and responsible for building the

, explains to EL MUNDO what this machine can bring to all scientists who study aging.

From the United States, where he is these days, he explains: "Everyone benefits from high-quality data and rigorous models.

. After all, it is a longevity machine but created for these worms. "

At the same time, we are contributing new concepts to the field that we hope will transcend nematodes and provide interesting ideas for others to learn from, just as we learn tremendously from the research of others."

This machine has already allowed them to observe, as Stroustrup comments, that each individual (human or otherwise) has a single chronological age: the number of years he has been alive.

However, if you take a hundred people who have identical chronological ages, for example, who are exactly 60 years old, they will not all have the same physical health (biological age).

, for example by DNA modifications or biochemical markers in the blood. But what all biomarkers of aging share is that they try to tell if a person is physically younger or older than a typical person of their chronological age.

(large volume of data), he points out that "

, and this gives us much better statistical resolution to understand the processes we study."

He further notes that "Artificial Intelligence is another buzzword. This project benefited more from human intelligence. Of course, we already use many different methods of machine learning, which allows us to use computers to quickly analyze hundreds of terabytes of data." of images we collect. The

is a complex automated experimental platform

and we couldn't do the project without it."

To develop the longevity (or lifespan) machine, this scientist spent seven years in a laboratory assembling prototypes, testing them, refining the prototypes, and trying again.

"In the second part of that period we had a small team working to run test experiments and start applying it to interesting questions. When we started, a lot of people realized that it would be incredibly useful to automate shelf life testing.

There was, and still is There are many highly trained research scientists sitting at microscopes for weeks, poking individual worms

to determine if they are alive or dead. Automation could free up this time and energy for more creative activities."

Inspired by "a neighboring lab" in Boston

His lifespan machine was inspired, he reveals, by Roy Kishony's neighboring Boston lab, which at the time used flatbed scanners to measure bacterial growth.

"Some of us graduate students were sitting around chatting and

realized that scanners could be much more convenient, easy and cost effective

compared to general purpose robots (which are expensive and often fragile) or equipment dedicated to life sciences, such as plate readers that at that time could not take good enough images," he explains.

The CRG team has discovered, in particular, that

: one that determines the CMV (cessation of vigorous movement, a biomarker of aging and an indicator of the health of the nematodes) and another, which determines the time of death.

Although the two processes follow different trajectories, their rates are correlated with each other;

that is, in individuals in whom CMV occurred at an accelerated rate, so did the time of death;

As a final result,

The study also shows that, regardless of lifespan-altering mutations and interventions in nematodes,

"This suggests the existence of an invisible chain of command, or hierarchical structure, that regulates the aging processes of worms and whose mechanisms have not yet been discovered. This means that while the aging processes may be independent, it is also It is true that some people age rapidly" and others age slowly, in the sense that many of their aging processes act similarly faster or slower than those of their peers," reports the CRG.

Faced with the hypothetical possibility that in the same organism, such as the human, there could be not one or two but several biological ages (that of the skin, bones and joints, liver, kidneys, heart, lungs, brain...), and that all these biological ages were directed or coordinated from a single 'point', Stroustrup specifies: "Our study investigates nematodes, but humans and worms share many similarities, so it can be extrapolated to a certain extent.

We found two ages biological, but we did not detect them in specific tissues

, for example, the skin or the kidneys. It is possible that the aging processes that we describe involve multiple organs."

He adds: "We know that our organs depend on each other to function, and that is why, when individual organs fail, it kills all the other organs and therefore the individual dies.

For me, it is difficult to imagine that aging is coordinated from a single 'point'

within worms. We are too complex and integrated machines for that. Mutation of a single gene can have disproportionate effects on aging in nematodes and mice, but these genes affect many different tissues. However, I'm speculating a bit beyond our study. There is a lot of excellent recent work, done by other groups, showing how different human organs age together and separately."

Regarding what internal and external factors are known for certain to be involved in the overall biological age of an organism such as the human, he replies that "at this time, the most unequivocal way to improve health outcomes, which ultimately is the goal of people trying to change their biological age,

it can be found in conventional medicine

. Also in quitting smoking and eating right. And getting enough sleep seems to make a difference as well, although the effect is smaller. To some extent, longevity is hereditary, so... Make sure you choose your parents carefully."

Regarding the effectiveness of biological age tests based on various biomarkers that some companies are marketing, he says: "What does it mean to be effective? If a product, for whatever reason, encourages people to improve their diet and take care of themselves better, is that effective? Or does it mean profitable, if the tests are worth the price? I understand that there is enormous pressure to develop

service ) to measure health, which is the biggest concern of people; both research tools and commercial products I think

These are tests that, to be definitively validated, will require clinical trials of years, if not decades." And he believes that, "the first to reach the market will be those that are least validated.

The longevity and MCV markers in our paper show us that you can't assume that just because one measurement correlates with another, it can be used as a biomarker."

Can you 'break' the maximum survival limit?

Each species seems to have its own upper limit of survival and there is still no convincing evidence about the possibility of breaking it.

However, in the case of humans, there are those who say that among the children born today there are already some who will break the barrier currently known in humans.

Something about which Stroustrup points out that, "the existence of a maximum longevity is still somewhat controversial. Experts can look at the same data and draw opposite conclusions.

What is known for sure is that, in many countries, we have seen that the hope of Life has gone up by an average of ten years in the last century

. Why shouldn't this continue?"

The CRG team's work continues: "We're moving in a couple of different directions, but I think the overarching theme is that

, and how those processes can be coupled to each other by systematic methods. This is a difficult problem, since aging processes are not physical objects that can be measured directly. You have to infer them from their influence over time on groups of genes, cells, and organs".

. Currently, sequencing technology has progressed to the point where it's possible measure ten or even fifteen thousand mRNAs in a single individual, in large populations, and study how each gene changes with age. So potentially we can go from a study of two outcomes of aging to ten thousand small outcomes of aging (changes in mRNA abundance) and ask how those results are related.