The repercussions of climate change are present in “government communication” 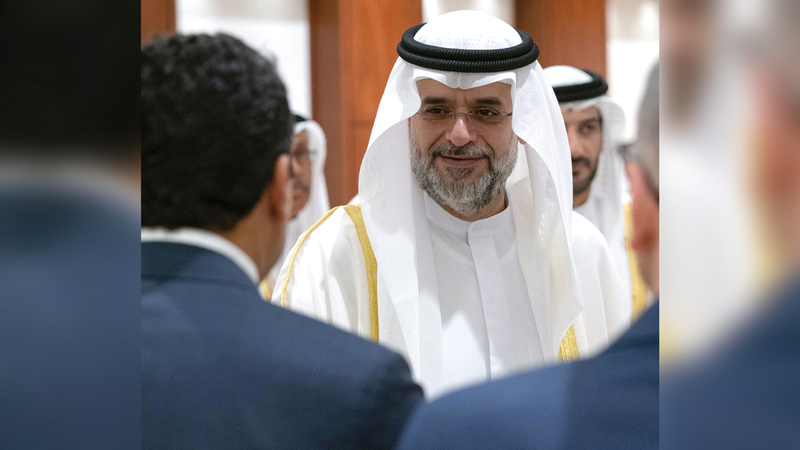 The repercussions of climate change are present in “government communication”

His Highness Sheikh Sultan bin Muhammad bin Sultan Al Qasimi, Crown Prince and Deputy Ruler of Sharjah, in the presence of His Highness Sheikh Sultan bin Ahmed bin Sultan Al Qasimi, Deputy Ruler of Sharjah and Chairman of the Sharjah Media Council, inaugurated the activities of the 11th session of the International Forum for Government Communication 2022, which is held under the patronage of His Highness Sheikh Dr. Sultan bin Muhammad Al Qasimi, Member of the Supreme Council and Ruler of Sharjah, and organized by the International Government Communication Center of the Sharjah Government Media Office, over two days, with the participation of more than 160 speakers and participants, under the slogan "Challenges and Solutions".

His Highness Sheikh Sultan bin Ahmed Al Qasimi said that the Emirate of Sharjah was able, through strengthening the role of the family and establishing institutions for childhood and youth, to build a media apparatus that provides useful and useful, and addresses the challenges resulting from openness, the spread of extraneous values, and the rapid technological development that led to the infiltration of some behaviors and ethics that contrary to the principles of society.

His Highness pointed out that "Sharjah today is a friendly city for children, young people and people with disabilities, and the first Arab city that is sensitive to the elderly. It has also become the first city in the Arab world to implement the work system for four days a week, with the aim of enhancing family cohesion, which we realize is our immune shield to confront These are the challenges.

In addition, Sheikh Nahyan bin Mubarak Al Nahyan, Minister of Tolerance and Coexistence, gave an inspiring speech entitled "Balanced Cultures... Equal Relationships", which dealt with the UAE's experience of openness to the other, development and stability.

On the importance of the International Forum for Government Communication, the Minister of Tolerance and Coexistence said: “This forum constitutes a global platform through which we call on everyone to affirm that diversity and pluralism are a creative force to achieve development and stability, and through it I call for continuous work to form people’s awareness and deepen their awareness the world around them, emphasizing the noble human values, and the importance of dedicating them always in the desired positive directions.”

The Director-General of the Sharjah Government Media Office, Tariq Saeed Alai, stressed that the absence of communication is a cancellation of the person's presence, even if he is present. He who does not communicate is not present in the equation of life, and whoever communicates in a wrong way creates a distorting shadow of his presence.

He added that communication should be in the context of confrontation with open possibilities about major economic variables, which may reach the point of crises in some markets and societies, and that communication should be the caring hand of official institutions that lead the public amid rapid changes and transformations towards sustainability and stability, by stimulating the thought of Facing challenges, self-confidence, and unleashing the spirit of innovation and creativity.

The former Mexican President, Honorary Chairman of the Global Commission on the Economy and Climate, Felipe Calderon, gave an inspiring speech entitled "(Green Growth... Decision-Making Mechanisms"), in which he addressed the importance of working to change the current way in which the world addresses climate change through government communication and the way we address it. by the audience.

He pointed to the importance of moving from addressing the destructive effects of climate change, which everyone is now aware of and aware of its dimensions, to talking about the opportunities behind making positive change, and moving to the model of green economy and sustainable development, pointing out that the government discourse in this area must be accompanied by actions, not words. and promises, so that it is more persuasive to the audience.

He stressed the importance of governments communicating with their people to clarify the opportunities inherent in them, and the potential for more flexible growth compared to the traditional energy sector, stressing the importance of sustainability in avoiding the occurrence of 700,000 deaths annually due to air pollution, in addition to increasing the GDP of countries, creating jobs, and mitigating environmental impacts. devastating and its repercussions on the world.

The opening ceremony included two inspiring speeches by the former Prime Minister of Canada, Kim Campbell, and the world champion in public speaking and author of the book “The Power of the Word”, Muhammad Abdullah Al-Qahtani.

Campbell stated in her speech, titled "What kind of government does the world need?" that the world needs governments that are able to solve problems and mobilize citizens towards outcomes and policies, stressing the importance of governments being good at reaching and communicating with their societies, and not being isolated from the world.

Campbell stressed the importance of communicating with actions and their great impact compared to communicating with words, noting that respect for cultures, races and nationalities builds stronger societies that are able to overcome challenges efficiently.

For his part, Al-Qahtani focused in his speech entitled “Leadership by Influence” on the power of the word and its great impact on the individual and his personality, and the possibility of it having a negative, destructive or positive impact that enhances creativity and unleashing energies. And to provide support to those under his responsibility at all times, and said: “A true leader is he who believes in you even when you do not believe in yourself.”

Deputy Ruler of Sharjah inspects the pavilions of the Forum

His Highness toured the corridors of the forum, which bears the slogan "Challenges and Solutions", and was briefed on the accompanying activities and various workshops that correspond to the forum's slogan and themes, serving different groups, and providing the most prominent experiences and models for effective government communication to face challenges.

His Highness also stopped at the pavilions of sponsors and partners and a number of media agencies, acquainted with His Highness with the participation of each party and the highlights of what it offers to the participants in the forum, including workshops, seminars, lectures, platforms and modern methods used to support government communication.

The Forum constitutes a global platform that emphasizes diversity and pluralism as a creative force to achieve development and stability.