Second-generation Covid vaccines: "The more adapted and up-to-date it is, it will include parts of the virus against which we have not been immunized"

Autumn arrives the first 'normal' after two years of pandemic. No masks, no restrictions. Now, respiratory viruses, not only Covid, but also... 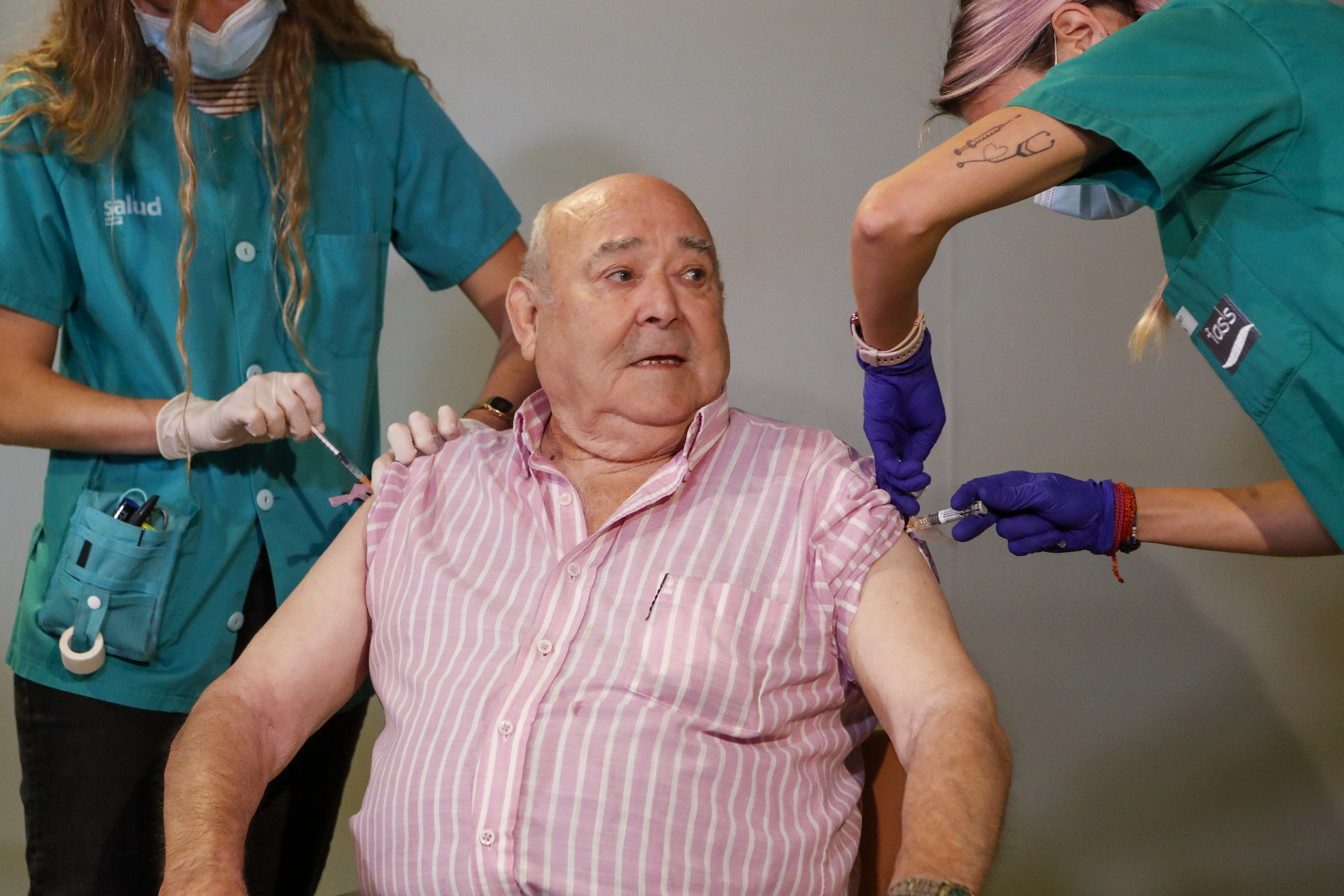 Autumn is here, the first 'normal' autumn after two years of the pandemic.

No masks, no restrictions.

Now, respiratory viruses, not only Covid, but also flu and RSV (respiratory syncytial virus) have no obstacles to infecting 'at ease'.

Until now, broad vaccination coverage in countries like Spain

remains the most effective measure

to protect the population, especially the most fragile.

Despite a favorable epidemiological situation, it is time to renew immunity against SARS-CoV-2 to prepare the body for eventual waves with new faces of the pathogen.

Thus, according to the criterion of greater vulnerability, the first to receive the fourth dose are

those over 80 years of age

and residents of social health centers.

Then, the age of the candidates to receive the reinforcement will be lowered until reaching a limit of 60 years.

The administration of the vaccine against Covid-19 may be in certain cases a good time to inoculate the flu, as many autonomous communities have already proposed.

Messenger RNA (mRNA) vaccines adapted to omicron are the protagonists of this new booster campaign, which promise a greater immunogenic response, although their effectiveness will be determined in real life.

The Ministry of Health announced in September that before the end of the month it will have 16 million anti-Covid doses, out of a total of 44 million that will be received in the last four months.

The communities will be able to face the inoculation of the fourth dose, but also of the population that remains to receive the first, second and, above all,

Pfizer-BioNTech and Moderna have updated formulations of their vaccines, designed specifically against the

BA.1 subvariant and against BA.4 and BA.5

Experts applaud the fact that updated versions to omicron are going to be administered in Spain, and warn that the differences that may exist between one and the other are not too relevant.

In fact, they point out, a second booster with the original formula would also be an effective strategy against severe disease.

It is still too early to think that vaccine manufacturers can get ahead of the virus.

inevitable that vaccines will have to undergo future adaptations

At the same time, they sent a reassuring message and pointed out that preliminary data indicate that the immune response induced by vaccines adapted to BA.1 goes beyond the selected strains and covers other omicron subvariants such as BA.2, BA.2.75 and BA. .5.

Again mRNA vaccines start from a better position than the rest.

But in this new phase of the pandemic, their main competition may be protein ones.

Companies such as Novavax and Hipra have developed trials that demonstrate the efficacy of their formulas as booster regimens in third and fourth doses, which support their ability to confer protection against omicron.

(the first adapted and approved) or common among lineages BA.4 and BA.5.

The first vaccines updated to omicron approved in Europe, those from Moderna and Pfizer/BioNTech directed at BA.1,

have clinical trials that demonstrate a good immunogenic response against omicron

Pfizer/BioNTech's bivalent vaccine adapted to BA.4 and BA.5 was subsequently given the green light, basing its decision primarily on clinical data from its first adapted vaccine (BA.1).

predominant or most conflicting variants

is an appropriate strategy," he defends.

Simultaneous immunization of Covid and flu to a man in the Elías Martínez public residence in Zaragoza.JAVIER BELVEREFE

The pharmacologist explains that vaccines may contain parts common to different variants and other different parts.

As a consequence, the specialization of the vaccine could lead to its effect being reduced compared to the original forms.

"In the end, what is important is that

the vaccine matches the variants in circulation

In this sense, a natural question arises and it is whether it makes sense to immunize with vaccines adapted to BA.1, since the latest versions exist against BA.4 and BA.5.

To which the experts reply that these first vaccines adapted to ómicron are valid in the current context.

"They are good vaccines and there is data that the

immunity they generate is varied and powerful

," says Marcos López Hoyos, president of the Spanish Society of Immunology (SEI) and head of the Immunology Service at the Marqués de Valdecilla Hospital in Santander.

Although the expert admits that "the ideal" would be to have the most up-to-date vaccines, he warns of the difficulty of being able to immunize with the vaccine adapted to the predominant subvariant of SARS-CoV-2 at any given time.

"The more adapted and updated the vaccine is, it will include epitopes or parts of the virus against which we have not been immunized with the first variants, and it will broaden the repertoire of the protective response. But

it is very difficult to get ahead of the variants

. Even with those adapted to BA.4 and BA.5, when they start to be used, they may have become outdated against the last subvariant".

"The virus goes faster than vaccines do," agrees

, head of the Malaria Immunology Group at the Barcelona Institute for Global Health (ISGlobal), a center promoted by the 'la Caixa' Foundation.

"On the table, the vaccines adapted to BA.4 and BA.5 will be a little better, but it is not known what will happen to new subvariants."

In this line, the pediatrician Fernando Moraga-Llop, vice president of the Spanish Association of Vaccinology (AEV) and former president of the Catalan Society of Pediatrics, considers that "you have to be vaccinated with the vaccine that is available".

Although he agrees that "the most consistent" would be to opt for the most up-to-date ones, he understands that it makes no sense to insist too much on this point: "

The AEV expert recalls that the United Kingdom published its recommendations on booster vaccination against covid-19 on the occasion of the approval of Moderna's bivalent vaccine for BA.1 in August.

These indications placed the reinforcement with the updated version of Moderna, the original

and the Novavax version at the same level.

However, in the United States, with the approval of bivalent mRNA vaccines,

the authorization of monovalent ones as a booster has been eliminated

Although these updated boosters have been shown to achieve a greater immunogenic response against omicron, their effectiveness in preventing the disease will have to be tested in real life.

"Because, as is logical,

efficacy trials have not been carried out,

but immunogenicity and safety trials have been carried out," warns Moraga-Llop.

In the case of the bivalent vaccines for BA.4 and BA.5, there are data that support their superiority over the latter subvariant, points out María del Mar Tomás, spokesperson for the Spanish Society of Infectious Diseases and Clinical Microbiology (Seimc) and microbiologist of the Hospital of A Coruña.

four times the neutralization capacity of the BA.5 subvariant

"Furthermore, these vaccines with a bivalent formulation would protect better against lung infection caused by BA.5."

Having vaccines with different technologies opens the door to heterologous boosters.

The combined use of vaccines is not an unknown practice in covid-19.

In Spain and other European countries, many people who had received the first dose of AstraZeneca had to

complete their vaccination schedule with a second dose of mRNA vaccine

trial , from the Carlos III Health Institute, showed that this strategy was capable of inducing a powerful immune response.

against homologous vaccination, either in the primary or booster regimen.

Although it is true that either there are not so many data, or this greater protective effect has not been directly seen when the sequence of vaccines is reversed and first an mRNA vaccine is administered and then it is passed to the viral vector ones.

For Carlota Dobaño, a researcher at the Barcelona Institute for Global Health (ISGlobal), the pandemic has been the acid test of heterologous guidelines.

"In animal models it is known that these guidelines work very well, but not all combinations work", warns the expert.

"The mechanism is not fully understood, but in the end, if the body is exposed to different types of vaccines

, different cell groups are activated and the power of the immune response is amplified

"Faced with initial uncertainty, heterologous guidelines have generally come to show greater efficacy in very different classes of combinations, which is why they are currently being recommended," confirms Antonio Portolés, from the Spanish Society of Clinical Pharmacology (SEFC).

"Even if there was one with a very different mechanism, such as those with mucosal action,

they could probably generate an interesting synergy

. All this must be studied and demonstrated."

With regard to the reinforcements, the president of the Spanish Society of Immunology (SEI), Marcos López Hoyos, is confident that the incorporation of recombinant protein vaccines will offer an alternative to the homologous guidelines with mRNA vaccines that may offer protection higher.

"Heterologous vaccination may be more useful in achieving protection even with vaccines that do not include such new variants, such as Novavax and Hipra, which offer the possibility of obtaining a more effective response."

In this sense, the immunologist states that there are data with

heterologous vaccination in the second and third doses

that point to a greater effectiveness in terms of the immune response.

"Although from the clinical point of view it does not seem that there can be great differences."

influenza, hepatitis A and papillomavirus

"In general, they are very good vaccines, which generate very high antibody responses. The hope is that they will be the most effective, and for booster doses, I would take these options into account," says Dobaño.

vaccine , from the American company Novavax, is authorized in the European Union

for both homologous and heterologous boosting

Although it was designed from the first genetic sequence of the SARS-CoV-2 coronavirus, the company points out that preclinical data suggest that it induces an immune response against omicron variants, including its BA.4 and BA.5 sublineages.

Fernando Moraga-Llop, vice president of the Spanish Association of Vaccinology (AEV), considers that "heterologous guidelines should be favored" with reinforcements with these recombinant and adjuvanted protein vaccines.

Specifically, Moraga-Llop highlights the potential in this scenario of the Spanish Hipra vaccine, which contains the receptor binding region of the alpha and beta variants and is considered capable of generating an immune response against different variants of the virus.

variants , with a significant increase in lymphocytes, as well as cellular immunity."

There are many discussions ahead about the future of revaccinations.

"Without a doubt it will be a topic of debate and learning. You have to

"It is necessary to determine what

immunity the vaccines generate, for how long and how they protect

in order to make decisions. Know how the antibody titers and the profile of cells that are really protecting against the disease are maintained."

The need for revaccination and new adaptations of vaccines to variants and subvariants will also depend on the evolutionary capacity of SARS-CoV-2 and the development of new variants that may cause an increase in severe disease and therefore hospitalizations and deaths each fall and winter, warns María del Mar Tomás, spokesperson for the Spanish Society of Infectious Diseases and Clinical Microbiology (Seimc).

"One possibility would be the decrease in the ability of SARS-CoV-2 to develop new virulent variants after this vaccination campaign."