He memorized the Qur’an and mastered the rules of its recitation when he was under ten.. The scholar Yusuf al-Qaradawi, the scholar who combined the constants of Islam and the changes of the age

An Egyptian preacher of knowledge, abundant in knowledge, prolific, striking with an abundance of rhetoric, literature, and poetry. 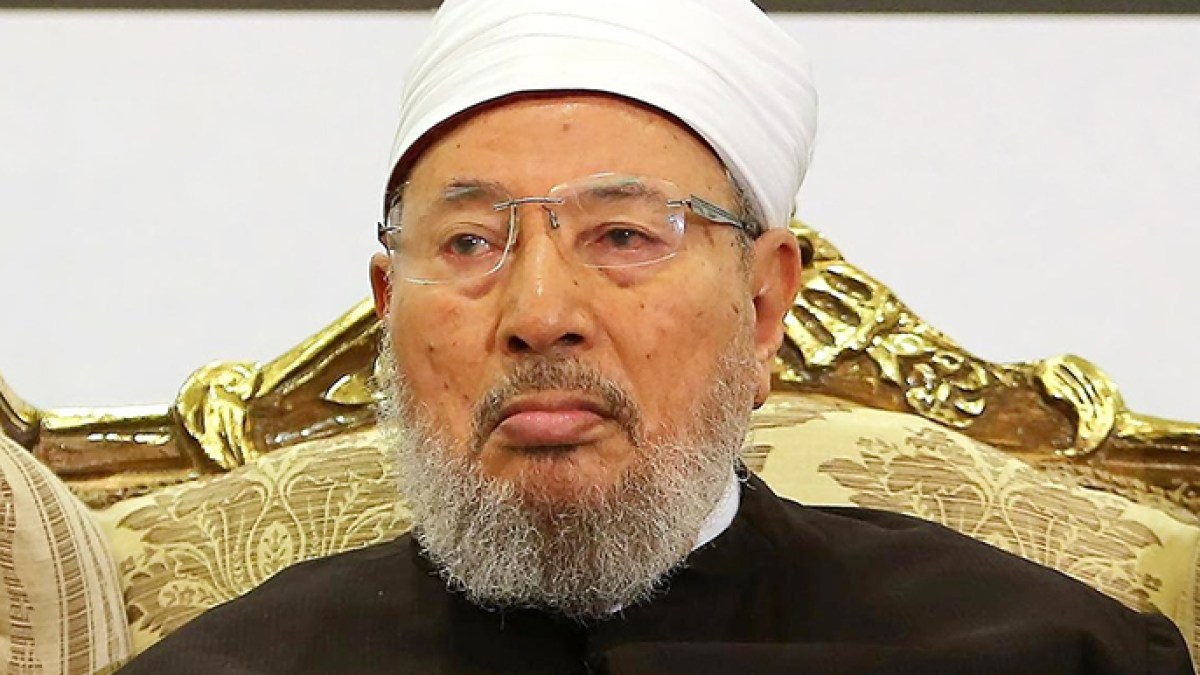 A scholar and Islamic preacher, with extensive knowledge and prolific production, striking with an abundance of rhetoric, literature and poetry, and one of the most contemporary preachers close to the masses and influential among peoples, and he is the owner of the school of facilitation and moderation based on combining the provisions of Sharia and the requirements of the era.

Youssef Abdullah al-Qaradawi was born on September 9, 1926 in the village of Saft Turab, the center of Mahalla al-Kubra, Gharbia Governorate, Egypt.

His father died when he was two years old, so his uncle raised him, so he memorized the Qur’an and mastered the rules of its recitation when he was under ten.

He joined Al-Azhar and completed his primary and secondary studies, then entered the Faculty of Fundamentals of Religion at Al-Azhar University, from which he obtained the High Certificate in 1953, and a year later he obtained a teaching license from the Faculty of Arabic Language.

In 1958, he obtained a diploma from the Institute of Higher Arab Studies in Language and Literature, before obtaining a preparatory study equivalent to a Master’s in the Department of Quran and Sunnah Sciences from the Faculty of Fundamentals of Religion in 1960, then he obtained a doctorate with distinction with first class honors from the same college in 1973 The subject of the message was "Zakat and its impact on solving social problems".

A lot of controversy has been raised about him, as some of his jurisprudential views and fatwas are not welcomed by some scholars because in their view the opinion is presented over the legal evidence in line with the pressures of the modern era, but his supporters say that he succeeded in reaching jurisprudential opinions based on clear rules in the principles of jurisprudence and the purposes of Sharia.

Dr. Al-Qaradawi worked in Egypt as a supervisor of the Institute of Imams affiliated to the Ministry of Awqaf, then supervising the publications of the General Administration of Islamic Culture in Al-Azhar Al-Sharif. He also joined the Technical Office of the Department of Call and Guidance, before being seconded to Qatar as dean of its secondary religious institute in 1961.

Qatar, which obtained its citizenship, sent him to Algeria during the academic year 1990-1991 to head the scientific councils of its university and its higher Islamic institutes, and then return to his work at Qatar University as director of the Sunnah and Biography Research Center.

He chaired the board of directors of the Al-Balagh Cultural Society in Qatar, which funded the "Islam Online" network until March 23, 2010, and was chosen to head the International Federation of Muslim Scholars from its founding in 2004 to 2018.

Al-Qaradawi was also a member of several Arab, Islamic and international academic and advocacy institutions, including the Fiqh Council of the Muslim World League in Mecca, the Islamic Call Organization in Khartoum, and the Center for Islamic Studies in Oxford.

Sheikh Al-Qaradawi joined the Muslim Brotherhood in Egypt, and was arrested several times for belonging to it, starting in 1949, while he was still a high school student. Then he was arrested in the major security campaign launched by the revolution regime in 1954 against the group.

His books, intellectual opinions and jurisprudential fatwas constituted a reliable reference and a source of wealth for the sons of what is known as the Islamic awakening since the sixties of the twentieth century, and shaped the culture of entire generations of students in particular, researchers and scholars in general.

For decades, he participated in the establishment of many Islamic bodies and institutions in the scientific, advocacy, charitable, economic and media fields.

Al-Qaradawi was prevented from entering the United States and the United Kingdom because of his support for the operations carried out by the Palestinian resistance inside Israel, describing them as "martyrdom."

In February 2011, he returned for the first time to the imam and oratory in Egypt after 31 years of prohibition, as he delivered the Friday sermon in Tahrir Square in central Cairo, days after the fall of the regime of President Hosni Mubarak.

Sheikh Al-Qaradawi described the revolutions in Tunisia, Egypt, Libya, Yemen and Syria as "a divine gift to change the course of their peoples", and strongly condemned the position of the rulers in confronting the peaceful revolutionaries with bullets and murder.

He was chosen in 2008 to rank third (the first is the Turkish preacher Fethullah Gulen, and the second is the Bangladeshi economist and 2006 Nobel Prize winner Muhammad Yunus) in the list of twenty most influential intellectual figures in the world, based on an international poll conducted by the American magazines "Foreign Policy" and "" British Prospect.

In January 2012, the "Al-Qaradawi Center for Islamic Moderation and Renewal" of the College of Islamic Studies at Qatar Foundation for Education, Science and Community Development announced the launch of the "Sheikh Yusuf Al-Qaradawi International Prize for Islamic Studies", which has two branches: an award for senior scholars and another for young scholars.

Through this award, the Center aims to honor scientific figures who have influence in the contemporary Islamic culture movement, in facing intellectual challenges and searching for solutions to Muslim issues.

On May 16, 2015, a court ruling was issued referring the papers of Sheikh Al-Qaradawi - and about a hundred others, including the ousted President Mohamed Morsi - to the Mufti of Egypt in what is known as the case of "escaping from Wadi al-Natrun prison" during the January 25, 2011 revolution, a decision described by the Sheikh It is worthless and not worth pursuing.

In response to his accusation of inciting against the regime of ousted President Hosni Mubarak in the last days of his rule, the sheikh told Al Jazeera - after the ruling was issued - that people have the right to revolt against injustice and falsehood.

In September 2013, the Egyptian Public Prosecutor Hisham Barakat put Al-Qaradawi’s name on the so-called anticipation of arrival lists, following communications alleging his incitement to kill Egyptian soldiers and attack the Sheikh of Al-Azhar.

Sheikh Al-Qaradawi has authored a large group of books, including 170 books that dealt with several fields, including the sciences of the Qur’an, Sunnah, jurisprudence, faith, advocacy, thought, mysticism, and literature (poetry and theater), including:

Sheikh Al-Qaradawi has received many awards, including:

Sheikh Yusuf Al-Qaradawi died in the Qatari capital, Doha, at noon on Monday, September 26, 2022, after a long suffering with an incurable disease that kept him in bed, and prevented him from many scientific and advocacy activities.