“Gulf Modernity” .. An artistic journey with the “pioneers” in the region 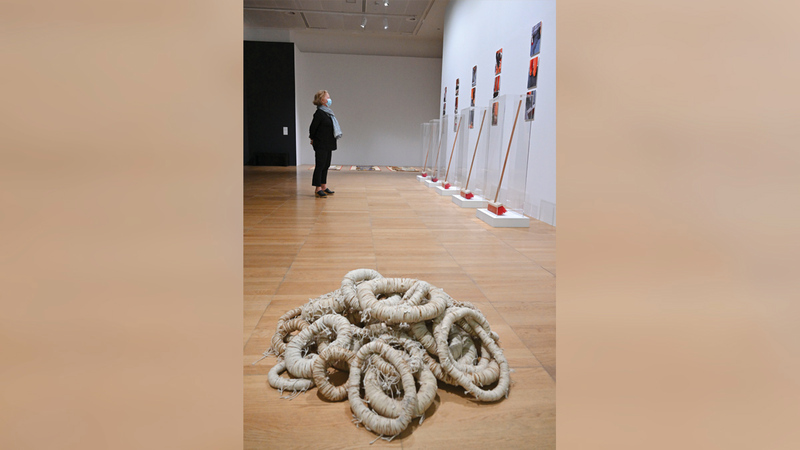 The exhibition highlights their experiences across 4 sections

“Gulf Modernity” .. An artistic journey with “pioneers” in the region

“Gulf Modernity” is the title of the exhibition that opened recently in the Art Gallery of New York University Abu Dhabi, which included works by art pioneers in the Gulf countries.

The title of the exhibition describes the qualitative shift in the visual scene, and the transformations that have taken place, in parallel with the rapid growth witnessed by cities during their journey of development, and highlights how the first artistic beginnings in the Gulf were characterized by creativity and leadership in establishing a special visual scene.

The exhibition is based on the doctoral thesis submitted by Dr. Aisha Stobe, curator of the exhibition, which explains the development of art through the stages of oil discovery and the changing features of the region.

The art spaces in the exhibition reflected the growth of feelings of national belonging, in conjunction with the development of the infrastructure and the political scene in the region.

“The exhibition and the research that preceded it are the beginning of a phase of cooperation to continue monitoring artistic movements in the region,” Stoby said about “Gulf Modernity.”

I hope that the exhibition will serve as an invitation to art lovers and researchers, to participate in the conversations, aimed at presenting studies on the history of our global art in the future. on him".

The first section of the exhibition bears the title "The First Pioneers", and includes works by artists who are the first to organize art exhibitions in the Gulf, including the Saudi artist Mohammed Ahmed Rassem and the Kuwaiti Mujeeb Al-Dosari. Ahmed Rasem, organized in a cafe in Jeddah, is noted as the first art exhibition organized in Saudi Arabia.

As for “Landscapes”, the second section of the exhibition holds the experiences of artists with the embodiment of nature in its realistic form on the one hand and the abstract on the other, and focuses on two groups of works, namely: the Manama Group, which was known in Bahrain, and the Three Friends Group in Qatar.

The displayed works show the artists’ interest in the environment surrounding them, and how they documented through landscape painting, as in the work of Bahraini Nasser Al-Yousef “Our Green Land”, who worked with the artist Abdul Karim Al-Areedh, who taught him painting, and with Ahmed Qasim Al-Sunni, to form a group known for its embodiment of landscapes. .

Also present in this (second) section is the work of the Emirati artist Abdel Qader Al Rayes, "The Era of a Sad Day", in which he embodies the features of the UAE, through his painting of nature, emptiness and palm trees.

As for the Emirati artist, Najat Makki, her work was "Takework", which embodies the abstract-oriented nature, and shows the composition of nature with its dark colors, especially brown, deliberately showing the light through yellow, which cuts the dark area with much light.

While the “Self-Portrait and Portrait” section takes visitors to the exhibition to the world of portraits, as artists look at the social scene, and therefore some aspects of social and political life are present in the paintings, including the work of the late Saudi artist Abdel Halim Radwa, entitled “Palestine”, which dates back to 1962, He embodies that stage with great sincerity.

As for the Bahraini Hussain Qassim al-Sunni, his paintings bear special compositions for people and faces, in which he is keen to divide the painting according to geometric color structures that leave his dominance even on the features of the faces, and the color gradient helps him in that.

In addition to the paintings, this section holds some sculptures, including the bronze sculpture of the artist Sami Muhammad, and the sculpture of the Emirati artist Najat Makki, which bears the name of a portrait designed from welded metal, which is characterized by its abstract style.

The “Conceptual Turning” section of the exhibition presents the experiences of conceptual art in the Gulf, highlighting the shift towards new artistic theories, regulatory frameworks and experimental media.

The exhibition shows the emergence of these experiences in the UAE and Oman, and highlights Emirati and Omani experiences, including the experiences of the two artistic groups that led this scene, especially the five group, while in Oman it was the "Circle Group".

The works of the late Emirati artist Hassan Sharif are present, and juxtaposed with works that use technology, including the work of the Omani artist Bodour Al-Riyami "Brooms of Wisdom", in which she works on the use of brooms and acrylic boxes, and mixes technology, installation work, calligraphy and photography.

Also shown in this section is the Omani artist Anwar Sonia's film, entitled "Fatima", which he made to be shown on layers of fabrics, and highlights the artist's passion for expression through faces and nature.

The works in the “Gulf Modernity” exhibition belong to many art groups, galleries, or family members of the late artists, and were shown through loan agreements with a number of institutions.

“The exhibition and the research that preceded it and that I conducted are the beginning of a phase of cooperation, to continue monitoring artistic movements in the region.”

Next December is the closing date of the exhibition at the Art Gallery of NYU Abu Dhabi.