Political showdown in Iraq: pro-Sadr sit-ins in front of the Supreme Council of the Judiciary 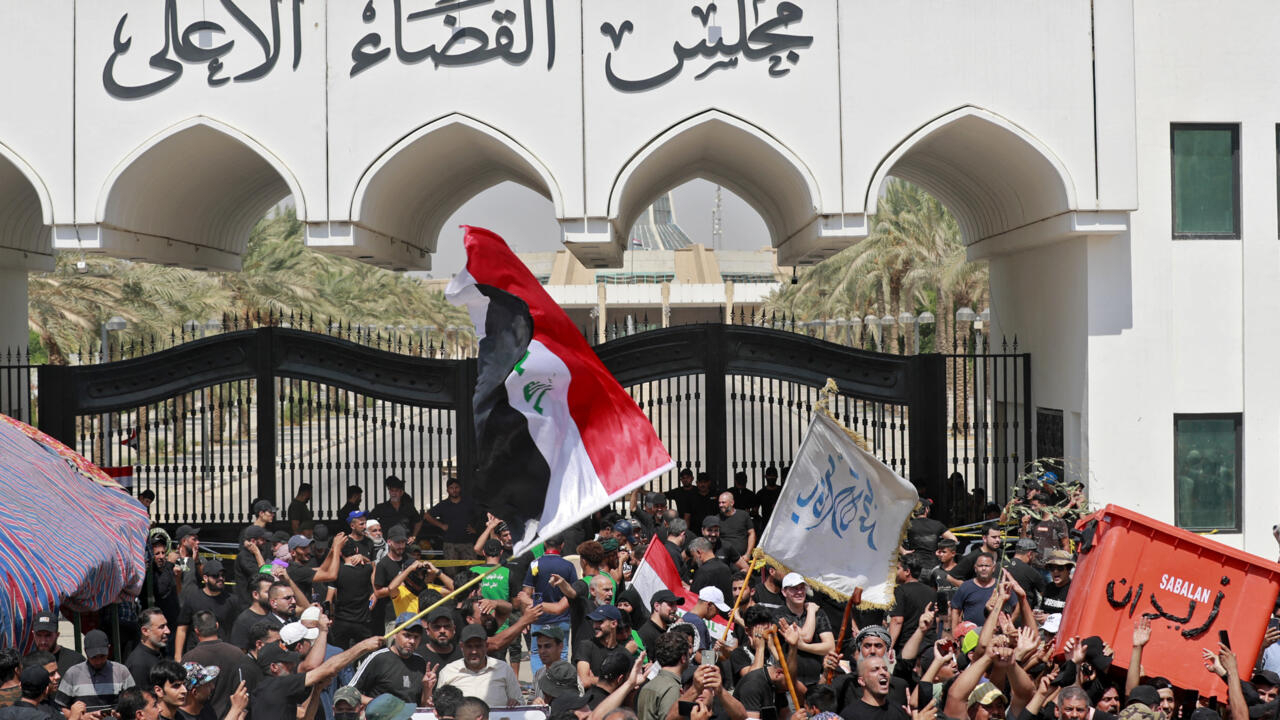 Political tensions are escalating in Iraq.

A few hundred supporters of Iraqi Shiite leader Moqtada Sadr began a sit-in on Tuesday, August 23, in front of the Supreme Council of the Judiciary in Baghdad to increase pressure on their opponents, in the midst of a standoff over the future of the Iraq.

Iraq, rich in hydrocarbons but overwhelmed by a serious economic and social crisis, has been in a total stalemate since the legislative elections of October 2021.

Since the end of July, tension has risen a notch between the two blocs of political Shiism: Moqtada Sadr's Current, which is calling for the dissolution of Parliament and early legislative elections, and its opponents from the Coordination Framework, an alliance of pro-Shiite factions. Iran, in a hurry to form a government.

>> To read also: "Iraq: who are the main actors in the political crisis?"

The two blocks link verbal jousting and one-upmanship, without however letting the situation turn violent.

Troublemaker of political life, Moqtada Sadr has demonstrated his ability to mobilize: for more than three weeks, his supporters have camped around Parliament in the Green Zone.

Supporters of the Shiite cleric held up posters demanding "the dissolution of the National Assembly" and a "fight against corruption".

"We want the eradication of corruption," Abu Karar al-Alyaoui told AFP. "The judicial system is under threat or else it is corrupt."

At midday, food was delivered to the demonstrators, a sign that they intend to set up camp for the long term.

In response, the Coordination Framework mounted its own sit-in on the outskirts of this ultra-secure district which houses government institutions and embassies.

On Tuesday, the Sadrists outbid by settling before the Supreme Council of the Judiciary, blocking entry to the highest judicial body in Iraq, where the Federal Supreme Court sits in particular.

Prime Minister Moustafa al-Kazimi decided to "shorten" a visit to Egypt, where he was to attend a summit with four other Arab leaders, and return to Baghdad to "monitor the situation".

He called for "calm" and "dialogue", according to a press release from his services.

The sit-in in front of the Supreme Council is quite a symbol: at the beginning of August, Moqtada Sadr had summoned the Iraqi courts to dissolve Parliament.

The judges declared themselves incompetent.

The court announced the "suspension" of its work.

Accusing each other of pushing Iraq to the brink of the abyss, Sadrists and supporters of the Coordination Framework clash over the methods of appointing the Prime Minister and the government.

The crisis began when the Sadrist Current refused the candidate of the Coordination Framework for the post of Prime Minister at the end of July.

Because ten months after the legislative elections, Iraq has still not replaced its head of government, nor its president.

The Coordination Framework said it was open to a dissolution voted on by the deputies, Moqtada Sadr, intransigent, demanded that justice dissolve Parliament... hence the sit-in in front of the Supreme Council of the Judiciary.

The Prime Minister convened last week a "national dialogue" to try to get Iraq out of the rut, a meeting boycotted by representatives of the Sadrist Current.

>> "Iraq: 'Everything is in place for political tensions to plunge the country into civil war'"

But Moqtada Sadr, to whom hundreds of thousands of Iraqis are obeying the finger in the eye, is also calling for a change in the Constitution which would allow the winner of the ballot to have the right to form the government as he pleases - which does not is not the case today.

His Courant came first in the legislative elections of October 2021 with 73 seats (out of 329).

But, unable to form a majority in the hemicycle, Moqtada Sadr had his deputies resign in June.

Taxing his opponents as "corrupt", enjoying an aura of a cleric, Moqtada Sadr is a regular at punching actions.

Although he has relays in most Iraqi ministries and administrations, his supporters see him as an outsider, a "revolutionary" always ready to fight against the "corrupt system" of the elites.