International press review - In the spotlight: the Russian-Ukrainian war still at an impasse after almost 6 months of conflict 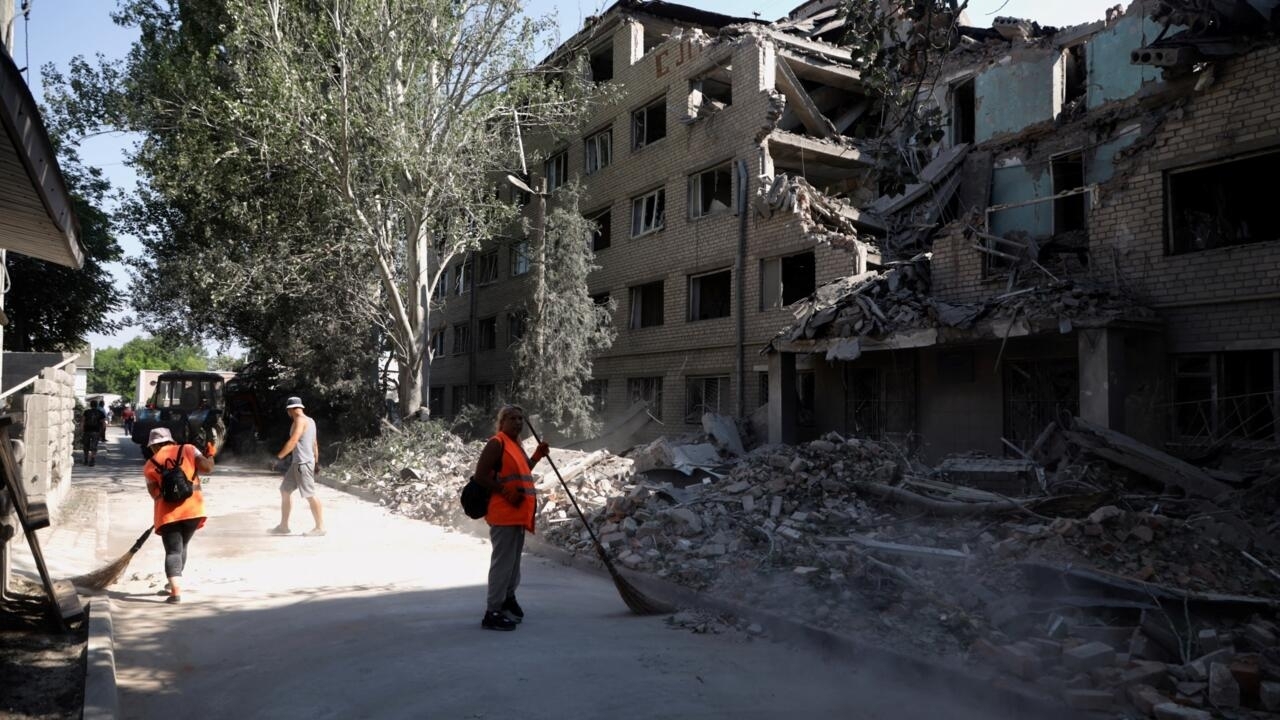 Communal workers sweep debris from a student hostel destroyed by shelling in Mykolaiv near the Black Sea in southern Ukraine on August 2, 2022. © AFP/Oleksandr Gimanov

still no peace negotiation in sight

", explains the special envoy of

in Ukraine who underlines that "

Zelensky will only negotiate if Russia abandons all the occupied territories, Crimea included

As perils mount around the Zaporizhia nuclear power plant, where Ukrainians and Russians blame each other for attacks “

which could lead to a global catastrophe

”, notes for its part the

, Moscow still does not intend to evacuate its troops who have been controlling the plant since last spring.

To read also: Conflict in Ukraine: operations continue in Crimea

this hot phase of the conflict

", the deployment on August 18 by Russia of three combat planes equipped with hypersonic missiles in the enclave of Kaliningrad, "

at the borders of NATO countries

After 6 months of conflict, even if the Russian forces are not making much progress on the ground, and the Ukrainians have succeeded in spectacular attacks in Crimea, "

Russia, which has taken 24% of the country, nevertheless remains militarily stronger than Ukraine

,” argues an analyst in

gloomy scenario for Ukraine in anticipation of winter

With the onset of rains and cold temperatures in Ukraine, the attacks could become more complicated, possibly opening a phase of negotiations

one more concern for Donald Trump

", in his multiple trouble with the law, says the

correspondent in New York, who points out that Allen Weisselberg, who therefore pleaded guilty on August 18 to "

15 offenses of tax evasion and robbery

” is very close to Donald Trump.

His faithful lieutenant for more than 50 years

", said the ex-wife of Weisselberg reports

, the Italian daily which ironically on the fact that "

will now have to testify against his company, the Trump Organization next October

if he has so far refused to implicate Donald Trump

", nothing says that this "

unwavering loyalty will hold during the trial

", underlines de his side The

His testimony could be "disastrous for the ex-president", believes

A week after the stabbing attack on the novelist in New York State, his alleged attacker Hadi Matar, 24, "

has been charged with attempted murder

, which points out that the prosecutor has by moreover strongly denounced the interview given by Matar to the tabloid

An interview reported by a large part of the international press, in which Hadi Matar said he was "

" that Salman Rushdie survived the attack.

To read also: Attack against Salman Rushdie: in Iran, the media evoke an "apostate writer"

” and accuses him of having “

While denying having been inspired by the fatwa issued by Ayatollah Khomeini 33 years ago, Matar also reiterates “

all the esteem and admiration he has for the Ayatollah

" which stunned the prosecutors, further notes the

, which points out that they are studying the possibility of a new charge "

A leaked private video that has since gone viral on social media shows Sanna Marin, the 36-year-old Prime Minister, '

drinking, singing and dancing with enthusiasm

band of revelers including journalists, people and even a member of his party

Shocking for the opposition, which even called for "

the childish behavior of the Prime Minister, in the midst of the cost of living crisis in Finland, and in the face of Russian threats

, which underlines that conversely, many Internet users defend "

This is exactly what the Finnish Prime Minister pleaded for her defense.