French press review On the front page: so much water, so much water on Corsica! Audio 00:04 Rescuers and firefighters in the town of Coggia in Corsica hit by violent storms, August 18, 2022. © AFP/Pascal Pochard-Casabianca By: Norbert Navarro 3 mins Advertising Deadly storms have mourned Corsica. A climatic phenomenon, not anticipated by meteorologists, which killed 5 people on the Island o 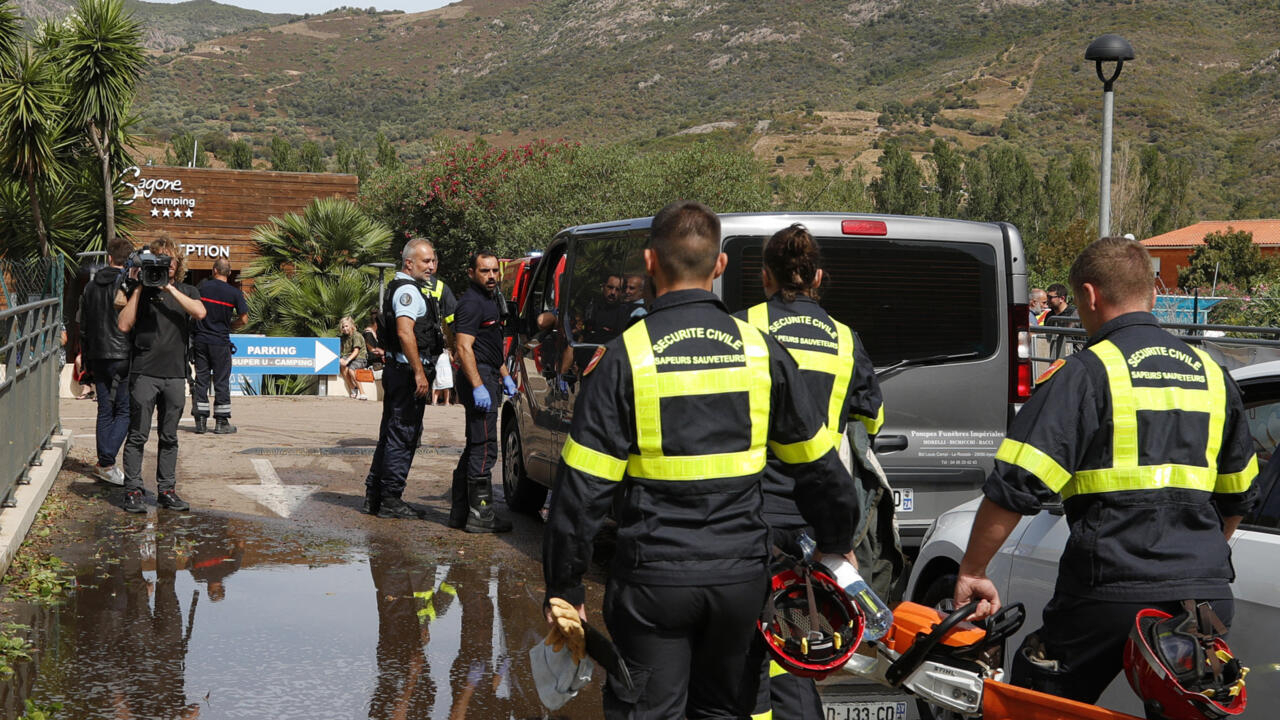 Rescuers and firefighters in the town of Coggia in Corsica hit by violent storms, August 18, 2022. © AFP/Pascal Pochard-Casabianca

A climatic phenomenon, not anticipated by meteorologists, which killed 5 people on the Island of Beauty.

And an apocalyptic image on the front page of Le

, that of a storm cloud in the shape of a giant jawbone about to hit the shore.

The photo was taken just before the brutal climatic episode which swept over this Mediterranean island, in the middle of summer holidays, devastating everything in its path, in a few minutes.

Gusts of up to 224 km/h which turn the slightest debris into a projectile.

The frequency and intensity of bad weather will increase in the years to come.

The drought that is raging in Europe prompted

to devote its headline to it, reviewing some of the sources of tension on the planet caused by threats to water supply.

From the Renaissance dam, in Ethiopia, to the veritable "

" that is Lebanon, via the water of the Tigris River, highly coveted by Turkey and Iraq, this journal draws a "

from Senegal to the Indus

nearly half of humanity lives in regions facing chronic or occasional water shortages.

In Africa, the Middle East, Central Asia and even in America, the points of tension are multiplying as river basins dry up and groundwater tables are emptied

This daily also notes that, “

from the Nile to the Tigris and the Euphrates, power is found upstream of the rivers and the right to water too often comes down to the law of the strongest.

The more the planet is thirsty, the more tensions surface, social disorders multiply, climate-displaced people throw themselves on the roads

According to this newspaper, “

the world needs a multilateral architecture where a real

“water diplomacy” can be deployed,

to fight against mismanagement, anticipate crises and ward off the risk of war.

source of life and condition of survival, on our planet

Mic-mac in Hamburg for Olaf Scholz

A tough day ahead for Olaf Scholz.

The German Chancellor is heard in Hamburg, the city of which he was mayor, by a parliamentary inquiry committee, in the context of a case of alleged tax evasion, initially brought to light by the German newspapers

The commission of inquiry will seek to find out "

why the tax administration of Hamburg decided in 2016 not to claim 47 million euros unduly collected by the private bank Warburg, when Olaf Scholz was mayor of the city

, admitting that the amount of "

to the detriment of the city of Hamburg

However, the economic daily hastened boldly to point out, the intervention of the city councilor, who has since become Federal Chancellor, “

still remains to be proven

Lack of green in the financial management of Agirc-Arrco

In France, it is the main system of supplementary pensions which is being pinned in the press this Friday, August 19.

, Agirc-Arrco invests in the stock market part of the 68 billion euros of the "

at least 36 million dollars in shares and bonds of the Airbus, Thales or Safran groups, which are nevertheless excluded from pension funds in Norway and Denmark for their involvement in the manufacture of nuclear weapons