A tribe in the Amazon jungle filmed a documentary about it

When the "Covid-19" pandemic reached the Amazon rainforest in Brazil, director Alex Pritz had to hand over the camera with which he was shooting his movie "The Territory" to the indigenous "Uru O Wu Wu" tribe that had retired from the world, leaving its members to take care of completing the work themselves. to talk nonsense 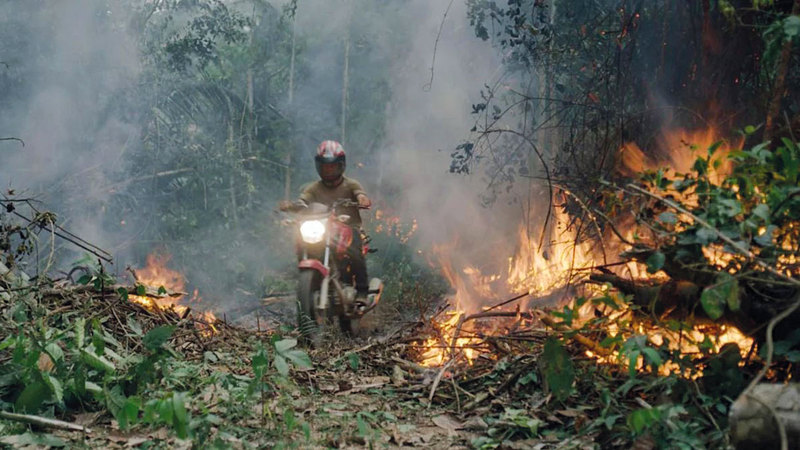 A tribe in the Amazon jungle filmed a documentary about it

The tribe was the one that bought and operated the drones to shoot some scenes.

When the "Covid-19" pandemic reached the Amazon rainforest in Brazil, director Alex Pritz had to hand over the camera with which he was shooting his movie "The Territory" to the indigenous "Uru O Wu Wu" tribe that had retired from the world, leaving its members to take care of completing the work themselves. Documentary about them.

"The Territory", presented by National Geographic on Friday in the United States, deals with the plight of these about 200 hunters and gatherers, who live in a reserve in the middle of the forest, surrounded by aggressive settlers, peasants and loggers who are illegally encroaching on their lands.

The sons of Oro or Wau Wow and their young president Bitati do not hesitate to take advantage of modern technologies in their response to these practices, even though they appear in the documentary film in their traditional clothes.

Alex Pritz tells that at the start of the Corona virus outbreak, Bettaty made a "courageous decision to say: Well, no more journalists on our lands, no more directors, no more Alex, no documentary directors anymore, no one."

"We had to have a conversation with him to find out if we had finished the film, did we have everything we needed and should we start the editing process?"

The director continues, “Betati was very clear and said no, we are not finished yet.

We still have a lot of work to do.

You haven't finished before, so how can you be done now?"

The director adds that the tribal leader told him on that day, "Send us better cameras and audio equipment, and we will take over the shooting and production of the end of the film."

This experience resulted in a “co-production” model, in which the name of one of the members of the “Uru or Wow Wow” was mentioned as the director of photography, and the tribe was allocated a share of the profits, and it was given the possibility of participating in commercial decisions related to distribution, since its contribution to the production is greater.

The decision to provide "Uru or Wow Wow" with photographic equipment and train its members to use it gave a "direct" view of the tribe's activities, including patrols aimed at preventing intruders.

"I filmed some patrols myself, but none of them were included in the final tape, and this is not due to our desire to change the output, but rather because what the tribesmen filmed was more realistic and expressive," says Britz.

"Children of the Digital Age"

Alex Pritz's film was not the first experience of the "Uru or Wow Wow" tribe in the field of modern technology, as it had previously adopted it and resorted to media campaigns to highlight its cause, establishing its image on the international stage as a guardian of the forest, whose fate is linked to issues of climate warming and biodiversity.

Alex Pritz notes that "Bitati and this new generation of (Uro or Wow Wow) are the children of the digital age, they were born in the late 1990s, they are on (Instagram), and this is part of the way they address the world."

Contrary to what many viewers believe, Britz asserts that the film crew had nothing to do with filming the tragic and tragic footage of deforestation that appeared at the beginning of the film, as the tribe was the one that bought and operated the drones.

The director points out that "the drones allow, for example, to reach in 30 minutes a site at the other end of a mountain range, which would have taken four days to walk through an old and dense forest."

• During the outbreak of Corona, the chief of the tribe made a decision: “No more journalists on our lands, no more directors, no one.”