The Earth observation satellites of the European Copernicus network have captured in detail the cloud of smoke from a fire in Portugal whose burning smell reached the... 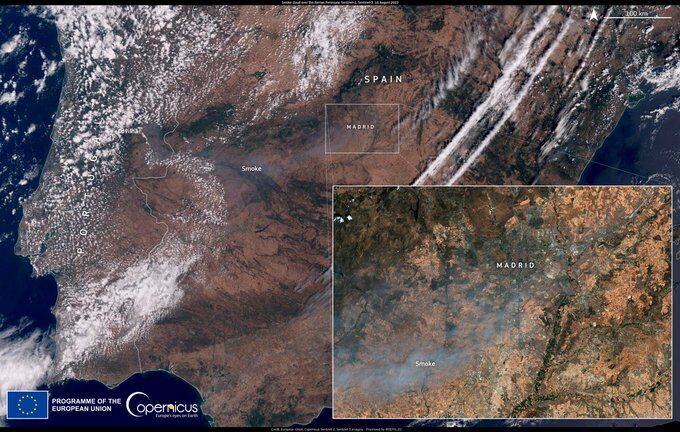 The Earth observation satellites of the European Copernicus network have captured in detail the cloud of smoke from a fire in Portugal whose smell of burning reached central Spain on Tuesday, surprising thousands of people, who called the emergency services without to be able to imagine that the smell came from a declared fire between 300 and 400 kilometers away.

The particles of the fire could be smelled and seen, since, as Rubén del Campo, spokesman for the State Meteorological Agency (Aemet), points out, "a certain haze was perceived and there was a turbidity in the atmosphere due to the particles from the fire" .

The fire, which has already destroyed around 25,000 hectares in the Serra de Estrela natural park, is the most serious that Portugal has suffered this year and has caused 24 injuries, three of them serious.

It was declared on August 6 and after being controlled, it was reactivated on Monday due to strong winds.

The particle measurement equipment confirmed the presence of the material from this declared fire in the center of Portugal: "It was a day in which there was little traffic in Madrid and there were no conditions for contaminating particles to accumulate. The measurement equipment detected those particles that, although they were generated more than 300 kilometers away,

were driven by winds from the west,

which very quickly and directly through the Tagus Valley, channeled them until they reached Madrid and other provinces such as Toledo and Ávila. In general, it was felt throughout the center of the peninsula," says the meteorologist in a telephone conversation.

Why does Madrid smell of smoke and fog abound?

Why does Madrid smell of smoke and fog abound?

That we could smell the fire at that distance caused a great surprise, but according to Del Campo, "when there are large forest fires

, the combustion particles can be transported over long distances

if there are very intense or strong winds blowing in the same direction."

"Sometimes at the surface, near the ground, the wind blows in one direction, and a few hundred meters higher, it blows in another direction, so there is a dispersion of the particles in different directions. But in the case of the fire in Portugal, the wind was clearly from the west for at least 2,000 meters of altitude, and

the particles traveled in the same direction".

That is why he points out that although it has been a very curious phenomenon, it is strange to a certain extent because it has happened other times: "For example, in June 2019, during a very intense heat wave, a fire broke out in the province of Tarragona and in the Ribera de Navarra there were testimonies of people who noticed the smell 300 or 400 kilometers away".

And although 300 kilometers is a considerable distance, those fire combustion particles can travel much further, thousands of kilometers: "Something similar to fire particles happens with the dust in suspension. If there are favorable winds, the dust that originates in the Sahara, it can cross the Atlantic, and has been observed in Puerto Rico or in the Amazon, in Brazil.