International report - Afghanistan in the grip of an unprecedented drought

One of the worst droughts in recent years has led to rainfed wheat crop failure, falling livestock prices and drinking water shortages in Afghanistan. 19 million people... 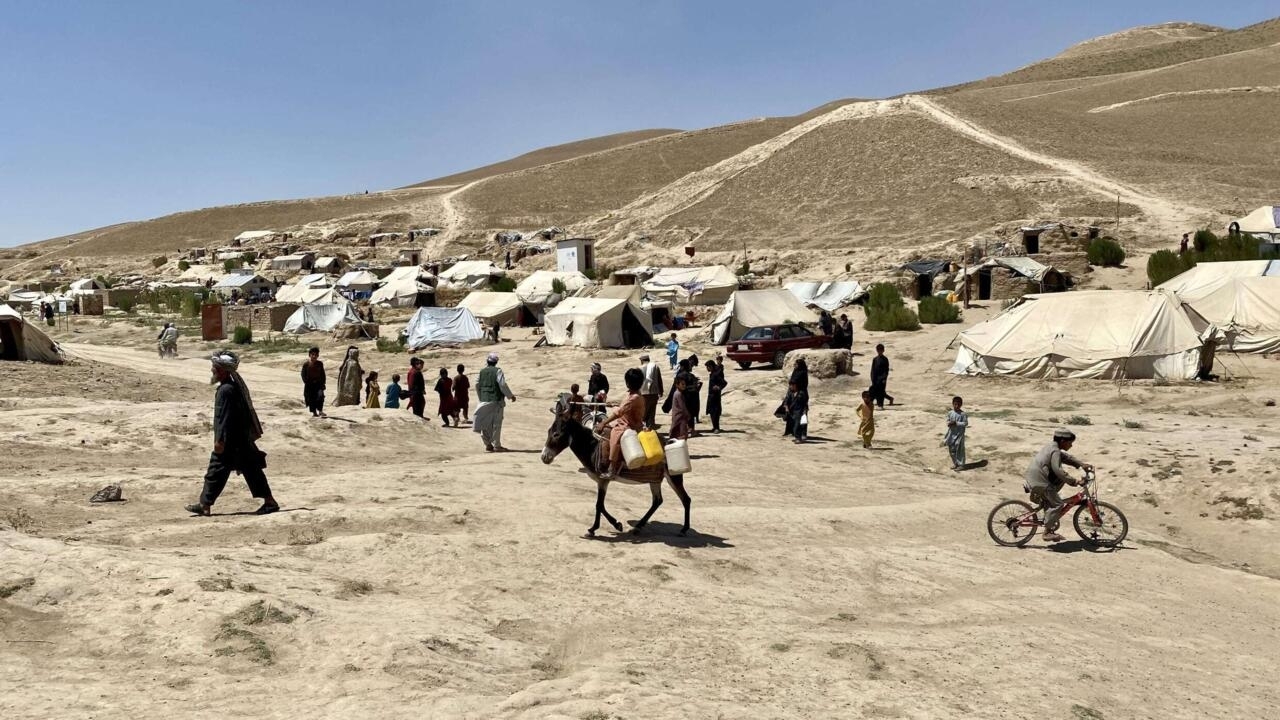 A climate-displaced camp in Afghanistan, in the province of Badghis.

One of the worst droughts in recent years has led to rainfed wheat crop failure, falling livestock prices and drinking water shortages in Afghanistan.

19 million people - nearly half of the country's population - are severely food insecure and in need of emergency assistance.

Report in the west of the country, in the province of Badghis, one of the places most affected by the drought.

From our special correspondent in the province of Badghis, Afghanistan

In a field of watermelons and sesame, in Abassi, a village in the province of Badghis, the soil is arid, the plants are yellowed and dried by the sun.

,” says Mohammad Rahim, an Afghan farmer who cultivated his family field until it produced nothing.

Every year we try to cultivate, but there is no income.

These sesame seeds are dried out because there was no rain.

Badghis province officials said more than 90% of farmers in the province have been severely affected by the drought.

They are particularly vulnerable, as the region does not have an irrigation system, which makes them dependent on weather conditions.

But according to Mohammad, "

it's in the hands of God, not in those of men

," he says, looking at his parched plantations with a sorry expression.

Every day it gets hotter and hotter.

Without a harvest to support his family, Mohammad has no other income.

He no longer knows what solution to consider.

“There is no work for us here, we survive from day to day.

We borrow money from rich people.

I may have to sell my land, my child or my sister, because we don't have enough to eat, only bread”.

According to the Afghanistan Drought Risk Management Agency, by 2030 annual droughts in many parts of the country are likely to become the norm.

The Afghan economy under the pressure of international sanctions

A few kilometers from Mohammad's field is the Qala-e-Naw IDP camp.

478 families, who had to leave their land because it had become uninhabitable, live in holes they dug themselves in the ground, strewn with tarpaulins.

Rabia, a mother, has lived in this camp for four years.

One of my children drank water from a river near our house, it was salty.

He fell ill, he was hungry and thirsty, he kept vomiting afterwards

Access to drinking water has always been a big challenge for the inhabitants of Badghis.

In some districts, the water from the wells is salty, unfit for consumption.

Mubarak's daughter did not survive it.

We've been here for five years, we live in this hole under this tent

,” she shows us, looking at the floor strewn with carpets, her voice weary.

Before it was fine, because we received humanitarian aid, but since the Taliban took over, there is no more aid for us.

We have only received two packets of flour since.

Experts predict that global warming will make droughts even more frequent and severe, forcing people in the worst-affected regions to seek refuge elsewhere.

They have been ringing the alarm bells in Afghanistan for years.

Climate refugee: a status to invent?

Although drought has been a problem for years, it becomes more threatening every year, affecting around 80-85% of the local population.

While emergency international humanitarian aid reaches the country, development projects have come to a complete halt.

It is the fault of the Americans, because they still do not recognize the government of the Islamic Emirate of Afghanistan.

Money from international banks is blocked because of this

He blames Western governments for blocking the money needed for development in the country.

And that's why our situation is so bad.

If our government is recognized, the money will come back and can help us

The international aid which maintained the essential public policies is interrupted, having put an end to the development projects in the country and the foreign reserves of the Central Bank are frozen.

The Afghan economy, which was 70% dependent on international aid, has experienced a spectacular drop since last year.

These systems can in no way be adapted to the scale of the humanitarian development operations that the groups would like to put in place.

According to experts, it is necessary to build - and rebuild - the Afghan national infrastructure, create efficient irrigation mechanisms.

Harvesting rainwater during the wet season and directing it to groundwater aquifers would go a long way to alleviating water shortages in future droughts.

Afghanistan: state of play one year after the takeover of the Taliban