"People with schizophrenia cannot settle for being second-class citizens"

Basilia Marichal lives in La Esperanza. Physically and emotionally. This is the name of the town where she lives in Tenerife and also the emotion, in capital letters, that gives her strength every ... 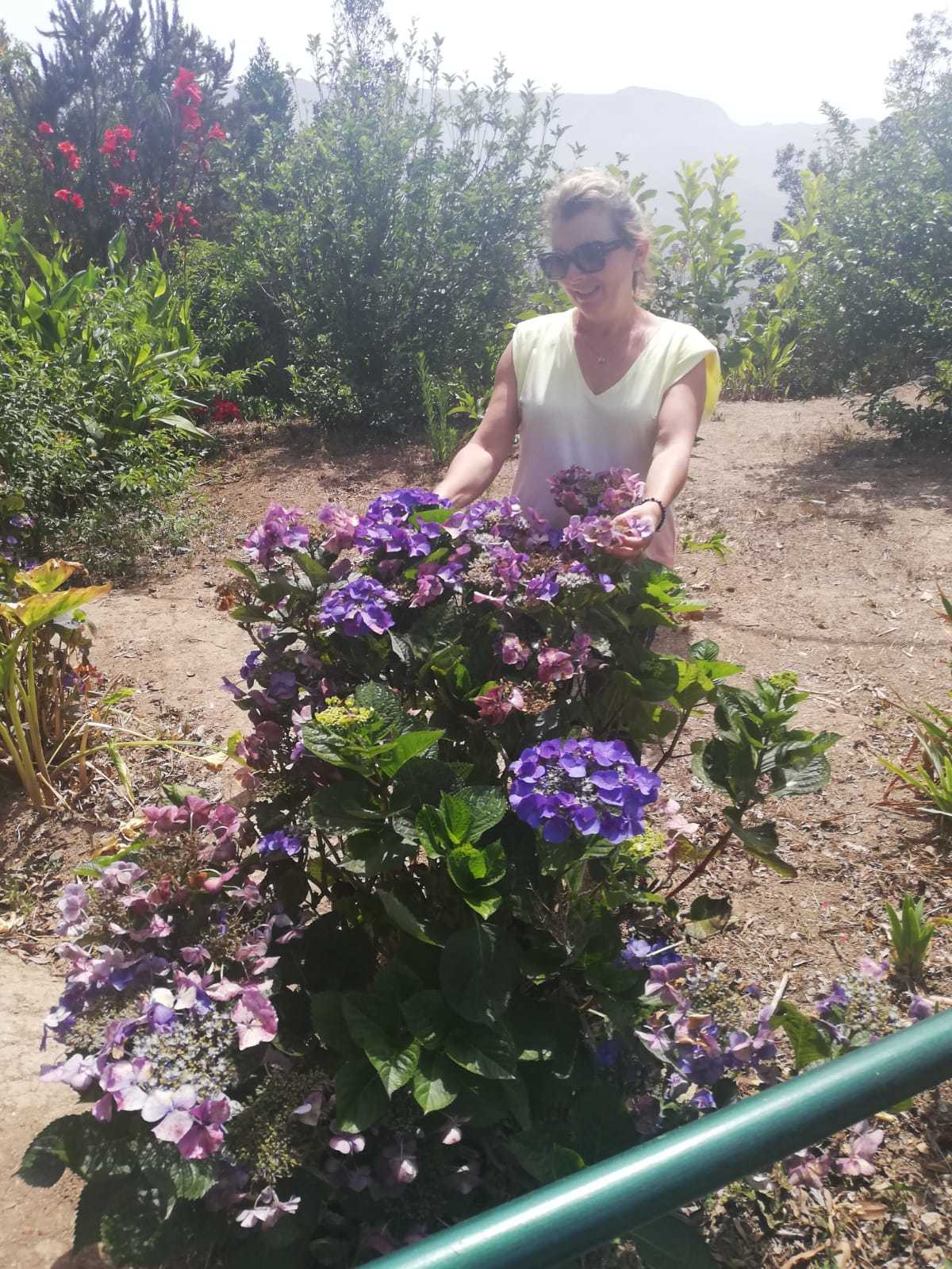 This is the name of the town where she lives in Tenerife and also her emotion, in capital letters, which gives her strength every day, especially since five years ago, when her youngest son, then 21 years old, was diagnosed with schizophrenia.

This "sinvivir" began after a trip with a lot of emotional tension.

Then they began to observe in him attitudes and thoughts that "did not fit", most of them mystical.

Through La Esperanza runs the road that leads to Teide.

On that path of ascent, the mist is left behind little by little until a sea of ​​clouds appears that caresses the traveler's gaze and the sun shines again.

With the support of her eldest son, 'Lita' was able to move forward and clear those clouds of anguish and confusion, seeking the necessary help to understand.

In Spain, more than 150 associations weave this support network for relatives and people affected by mental illness.

She "began to breathe" when she went to AFES Salud Mental.

In this association they received information about the disorder and psychological care that they did not find in public health.

"It is not true that everything is solved with the drug. There are no resources for families. We need to feel supported and that we are not alone.

In this process it is crucial to be able to share your doubts and fears, as well as your needs, with other people who have lived through the same experience.

that space for listening and therapeutic understanding.

"At first I saw everything dark, with no way out, but little by little with the support of my colleagues we were seeing clarity, we learned to share and listen to positive things. You begin to see life from another point of view," says 'Lita' with relief on the associative movement of which it is a part in Tenerife.

His son still does not accept his illness,

"he revolts at the word schizophrenia"

and wonders "why his life stopped five years ago".

Despite still not fully assimilating his situation, he does take medication and go to psychotherapy to deal with his pain.

She trusts that she will understand him little by little.

Hers in him is full.

"My mission and that of my family is to help, motivate him always and at all times.

I would tell a family member of a person who receives this diagnosis not to give up, to fight, to give them love, to seek advice, to be positive, that there may be changes.

You must not lose patience, faith or hope", he asks with the strength of someone who feels every word he pronounces. He did not always have this "strength", he admits. At first, desperation for not understanding his delusions led him to go to him in a way "that was not appropriate", with "screaming and losing his temper", to get him out of that incomprehensible reality for her. He did not achieve anything and he suffered a lot. "I cried because I was not understanding it", he admits. Now with just one look knows what he needs and many times, most of the time, he merges into a hug with his mother to shake off some torment.

. If he is in a moment of crisis, that is when he needs the most attention from you. To gain his trust, the first thing I do is go from home with him to the place he likes the most. In his case, the church is the place where he relaxes. Then we walk, we go to have a drink...".

'Lita' thus manages to reduce her son's agitation without questioning those ideas that torment him: "We talk about everything but never against his delusions. I always wonder how to help him with those ideas without discussing them and serve as support and comfort ".

He tells her everything, even when desperation makes him think of taking his own life.

And she "acts" to give him reasons to cling to her.

Throughout these five years, she has had

and 'Lita' has stood up so that she does not suffer a relapse that takes her to the hospital: "This child comes out whatever it is."

And that 'whatever' includes unconditional doses of patience, perseverance and professional support.

I wonder how to help him with his delusions without discussing them and be supportive and comforting.

A serious mental disorder such as schizophrenia not only marks the present of a person by changing their inner world and their relationship with the environment, but also their future.

The medication and the impact of the disease can reduce some of their abilities, not their intelligence, and force them to rethink their life as they had conceived it.

"You have to motivate them because they alone are not going to do it,

it is difficult for them to start but that is where we have to be, that they learn the way and awaken small illusions in them.

She always used the phrase 'you can'.

You have to have full confidence and little by little you will see the results", he affirms with full conviction. He "does not throw in the towel". This same year he enrolled in a cooking school although he finally had to drop out due to the excessive stress that "The time will come," his mother confidently assures him, the same mother who encouraged him to get his driver's license and enjoy greater autonomy.

Another look at schizophrenia: "The diagnosis is the beginning of a story of overcoming"

Another look at schizophrenia: "The diagnosis is the beginning of a story of overcoming"

It may seem like a trivial fact, but for a person with schizophrenia, driving a car is like "having a spaceship".

explains it to us,

praising the merit of his colleague at ASIEM.

Both have paranoid schizophrenia and collaborate in this association by reaching out to other people who, like them, must face life with a serious mental illness.

He "debuted" at the age of 28, at a time of great stress in which he worked in a bank, was in a game and had a very active social life.

At that time, he admits, he "flirted" with

and for three years, without knowing why, he barely fell asleep.

"I hit the roof. I hadn't slept for a week and I had to take sick leave

. They referred me to a psychiatrist," he explains during a video call.

He rejected that medical conclusion because it was too "severe" for what he considered to be an insomnia problem.

He took the medication "two or three weeks" but ended up leaving it: "I slept but my personality also changed."

He then began to develop "positive symptoms" (delusions and hallucinations) and after a year he had an "uncontrolled outbreak" and ended up hospitalized.

That relapse made him aware, accept his illness and the need to respect the treatment.

"The side effects are strong for the body and the mind but I will never say that you have to stop the medication,

Óscar often insists on his task of accompanying other people who have suffered an episode of psychosis.

The process to stop medication is to take the medication"

Her son Jorge had a psychotic break when he was 15 years old after he was wrongly diagnosed with ADHD and prescribed amphetamines as part of the treatment.

"her life project had to change":

he had lost capacities and now he must find others to lead an autonomous life.

In their eagerness to get him ahead, her parents put a lot of pressure on them so that she would continue studying, but he couldn't.

The psychotic break he had suffered had affected him cognitively and he could not memorize or concentrate.

The medication helped control his delusions or hallucinations but he had to deal with the side effects.

In the recovery process, he goes through a period of mourning in which it may be necessary to give up the idea of ​​what they expected for his life and draw another horizon.

Jorge does it with passion in his graffiti.

an urban artist and that "makes him happy".

He projects on his murals his

"yearnings" for him, his

The works that he signs, says his mother proudly, are highly appreciated and respected.

That explosive creativity, that sensitivity, also make him unique.

One of the graffiti drawn by Jorge on a hairdresser's blind in Valencia.

One of the biggest concerns for parents of someone with schizophrenia is what will become of him or her when they die.

'Lita' is aware of this and despite the fact that she knows that her two brothers would never leave her alone, she speaks clearly with him so that he is aware that she will not always be by his side and gives him tools so that when that time comes he will not give up, be

"responsible", "strong" and know what "your path" is

to have "a normal life and be happy".

On this road to recovery and autonomy, employment is a key factor and as far as this group is concerned, the data does not offer them too many opportunities.

"83% are unemployed. It is the worst employment rate of all functional diversity," laments Eduardo, a member of ASIEM, who emphasizes the need to "open new horizons of labor insertion and training so that they recover their project life with economic independence".

Where to find help.

Association of Family and Friends of the Mentally Ill

Association for the Social Integration of the Mentally Ill

Association in Struggle for Mental Health and Social Changes (ALUSAMEN)

Association of relatives and relatives with mental illness

Association of relatives of the mentally ill (AFEMEN)

Association of relatives and people with mental illness of Córdoba (ASAENEC)

SEEDS OF THE FUTURE ASSOCIATION

Granada Association of relatives and people with mental illness (AGRAFEM)

Association of relatives with patients with schizophrenia

Association of relatives of the mentally ill from Al Axarquia

Association of relatives and people with severe mental illness (ASAENES)

Illusion for the future.

Psychiatry has assumed that it cannot cure mental illness and conveys the idea that it has to contain eccentricities.

The asylums were closed with the law of 1986, but what has been done is to create many small asylums that are residences and for those who are not in them, create many small pharmacological asylums," he argues. For him, the panorama for people with problems serious mental health is currently "bleak".

as an example of the courage of someone who looks forward after having put the chaos in order.

Alejandro asks those who suffer from a serious mental illness

not to isolate themselves and create links with their community

That they practice "social activism", but before that and above all, that they "take their diagnosis seriously" because "they can save time and a lot of quality of life", that they "try to reflect on what it means and try to redirect that end. Don't settle for being a second-class citizen".