At the Interceltique de Lorient, the revival of traditional games

It's not just bagpipes and lace headdresses at the Interceltique festival in Lorient, Brittany, western France. The event, which is in its 51ᵉ edition, focuses -well… 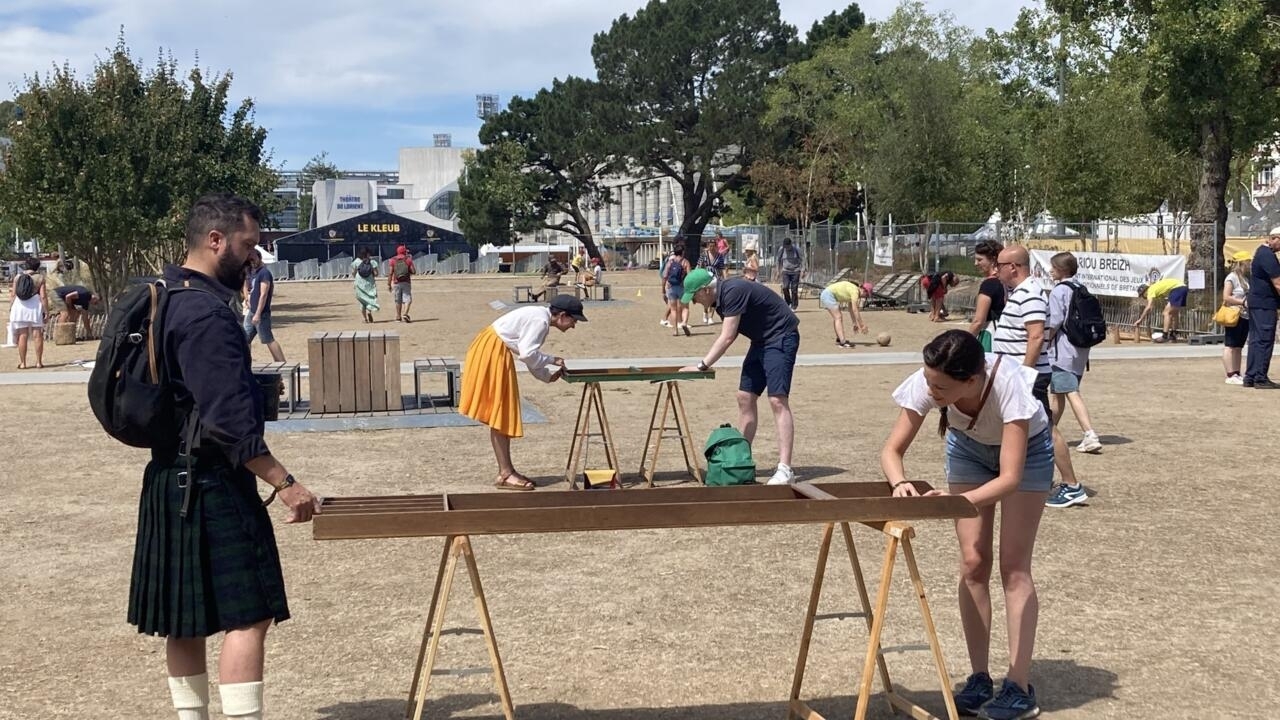 At the Interceltique de Lorient, the revival of traditional games

It's not just bagpipes and lace headdresses at the Interceltique festival in Lorient, Brittany, western France.

The event, which is in its 51ᵉ edition, focuses -of course- on music and dance, with groups from Brittany, but also from Ireland, Galicia, Asturias.

But it also gives pride of place to traditional games which are experiencing a real craze after having almost fallen into oblivion.

From our special correspondent in Lorient,

At Parc Jules-Ferry in Lorient, the lawn is scorched by the sun and the drought.

Hugo and his friends are sweating.

They persist in throwing a metal circle at a square wooden plank, a few meters away.

"It's the game of Breton puck: it's a bit like petanque,

explains Hugo behind his sunglasses.

We throw a small puck on the wooden board, as if it were a jack.

The Breton puck is played by team.

For the moment, that of Hugo is ahead of his opponents of the day.

10-15 years ago, the puck almost disappeared,

Only old people played there.

We did initiations in schools and festivals, and now everyone knows!

Even sports stores sell it.

France: after the Covid years, the fervor found at the Interceltique de Lorient

This rescue owes a lot to the volunteers of

, the Federation of Friends of Breton Wrestling and Athletic Sports, founded in 1930. The association, approved by the French Ministry of Youth and Sports, has identified 95 traditional games:

(which consists of passing a pebble through a hole), skittles of Alder (different from the skittles of Pays bigouden…),

Impossible to name them all.

Despite their diversity, Breton games have several points in common: inexpensive, ecological (in wood or metal), durable, simple and user-friendly, they are experiencing a second youth after the confinements which have pushed the French to rediscover the joys of the outdoors. .

Children are the most enthusiastic when it comes to these

This afternoon, there are about ten little

, as educator Alyssa le Sénéchal affectionately calls them, to learn about

“Breton wrestling is a sport that dates back to the 4th century,

recalls Mickael Boisson, vice-president of the Morbihan committee of

1,500 licensees in Brittany, in around forty clubs

And contrary to what Ilan, 7, says, the goal is not to

“knock out the opponent”

is a combat sport, which is practiced mainly standing, leg against leg.

The wrestler wears a heavy linen shirt and can only be grabbed there.

The goal is to knock down the opponent.

Both shoulder blades must touch the ground simultaneously, before any other part of the body”.

After two years of the Covid epidemic where contact sports were almost banned, Breton wrestling is once again gaining followers.

A good omen for the file that Falsab, the Federation of traditional games, and that of

, have submitted to Unesco.

The associations want traditional games to be recognized as intangible cultural heritage of humanity.