Ticks, the invisible threat of summer that gains strength with the increase in high temperatures

Summer, a time when ticks roam freely and it becomes the worst nightmare for those who investigate it, fight against its proliferation or against its... 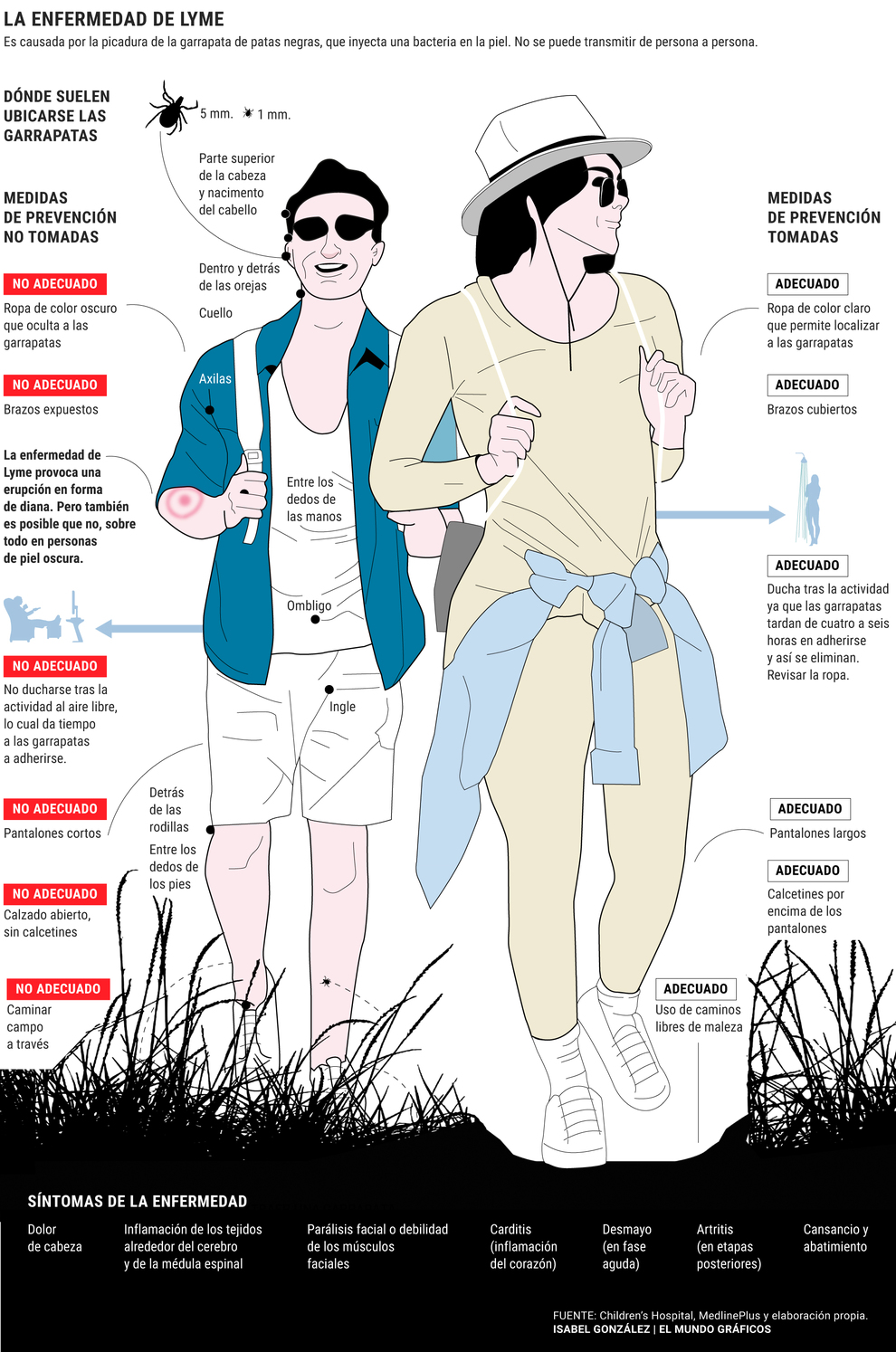 Summer, a time when ticks roam freely and become the worst nightmare for those who investigate it, fight against its proliferation or against its bacteria.

at least 29 varieties of ticks in Spain and more than 900 species in the world.

But when have they stopped being just a problem for animals or livestock?

These vector arthropods are the

cause of numerous diseases in humans

and in many cases they are considered an emerging pathology, "a rare disease" and one that is not necessarily notifiable, as is the case of Lyme disease.

The increase in outdoor activities, the loss of seasons due to climate change and, therefore, the rise in temperatures, have given rise to a perfect breeding ground for ticks to multiply and strengthen their resistance.

According to the World Health Organization (WHO), vector-borne zoonoses cause the death of more than 700,000 people worldwide each year and account for nearly 20% of all infectious diseases, such as Zika, the West Nile or Crimean-Congo hemorrhagic fever.

In the month of July,

were detected in the Bierzo region of

, as notified by the Ministry of Health.

that threatens our fields.

consists of a zoonotic pathology developed after the bite of a tick -Ixodes Ricinus-.

"Not all ticks of this species carry this bacterium. Only the bite of one infected by

i will cause Lyme disease in the host," explains

, director of the Center for Rickettsiosis and Diseases Transmitted by Arthropod Vectors and spokesman for the Spanish Society of Infectious Diseases and Clinical Microbiology (Seimc).

a bacterium present in " the

deer tick", although it also finds its reservoir in small rodents and deer, will cause Lyme disease in the human body it enters.

a pathology that is difficult to detect,

since it can be asymptomatic as well as awaken uncertain signs attributable to another complication or even manifest years after the bite.

"The main problem is when

and thus the trace of origin of the infection is blurred", details

The number of people suffering from this disease is currently unknown.

with Lyme were registered throughout Spain, which meant an

increase in hospitalizations of 191.80%.

These are estimates only.

As it is not a notifiable disease, "we do not know exact data, since they are not required."

Now, in addition to the tests endorsed by scientific societies, "

have appeared on the market that detect more patients than those who truly suffer from the disease," Oteo specifies.

"The idiosyncrasies of the bacteria cause the tests to fail and many people remain undiagnosed or inaccurate," explains Navarro.

Hence, the data is undervalued, says the doctor.

the most common zoonotic disease in Europe,

so the difficulty in detecting it only slows down research and the need to establish a consensus -among health authorities- on diagnosis and treatment", she adds.

Following the trail of the

There are stories of patients who have spent years feeling

that due to more hours of consultations, more treatments or tests, Lyme disease is not usually among the options that the specialist considers since it is easy to confuse it with another pathology with which it shares the symptoms.

"I have patients who began to develop signs of the disease in their adulthood and even after many tests it has not been related to the tick that bit them during childhood, since in their day they did not present symptoms," says the doctor.

A circular mark shaped like a bull's-eye in appearance that develops after a borrelia-infected tick bite.

"Although it does not always appear, it may only occur in half of the people who are bitten", specifies Oteo.

Erythema migrans would help to make the diagnosis in the early localized phase.

If it goes unnoticed, after days or weeks without treatment, the patient will develop complications derived from the spread of the bacteria to other organs.

can affect one or both nerves of the face," describes the Seimc spokesman.

Accompanied by tiredness, headache, and even fever.

"If the antibiotic is administered quickly, the percentage of patients who recover without any problem is very high," Navarro points out.

On the other hand, if the antibiotic therapy is correct or it has not been diagnosed in time, Lyme progresses to the next stage.

"The patient will continue to be affected by the nervous system, as well as muscle contractures and pain in large joints.

The bacteria can even migrate to the heart

"If we perform an electrocardiogram on the patient we can find disorders in the conduction of the electrical impulses of the heart, perhaps he does not experience them but it will appear in the tests," he adds.

If in these cases, the symptoms have not been related to Lyme disease, the patient would go to the

The involvement of large joints continues to be the main trunk of all ailments, accompanied by dizziness, headaches, persistent fatigue, and even implemented by complications such as "

with which the skin becomes parchment-like and damaged".

It is the dermatological manifestation of Lyme "most frequent in Europe", points out José Antonio.

At this point, the signs of the infection become intermittent.

"There will be months in which pain appears in a muscle, the pain ceases and the following month they attack another completely different one," concludes the specialist.

The persistence of symptoms, treated correctly or not, has led specialists to coin terms such as

This label aims to encompass those

patients who have been dealing with the disease for years

and who, having carried out the treatment, continue to carry the symptoms.

In this, it happens as with Covid-19, there are those who, after overcoming the infection, continue to carry the ailments or complications derived from the disease.

The same goes for Lyme.

"I do not agree with the use of the term chronic,

it seems that we are talking about something that cannot be cured, however, infectious diseases and those caused by bacteria are capable of disappearing completely after antibiotic treatment", explains Oteo.

We can talk about

, the bacteria may have been eliminated from the body and cause sequelae.

"Many of these patients report that they are tired, have

"These signs can linger for weeks or months after overcoming the infectious disease," he adds.

The lack of unanimous criteria among health competencies throughout Spain, the variety of precise or "excessively sensitive" tests, their accessibility and the variety of signs of early manifestation of Lyme complicate the diagnosis.

"The disease is identified when there has been a bite prior to the onset of symptoms, but

in which the bacteria's host is found is also decisive," explains Oteo.

A patient with facial paralysis or fatigue and muscle pain in Asturias does not arouse the same suspicions as one with the same symptoms in Valencia.

"If the typical ailments occur in the north of Spain, it is a clue to start treatment," insists the specialist.

Although, it is true that

this tick has been found in most national territories.

"Where it occurs most is in the northern half, predominantly in deciduous forests with tall grass, scrub and humidity," specifies the Seimc spokesman.

The increase in bites in recent times has gone hand in hand with climate change, among other issues.

"they live longer, they reproduce and therefore there is a greater probability of transmission

Although not everything is an external problem.

"The development of the disease has also been linked to people's

If the defenses are low there is less resistance to the bacteria, in this case to

In addition to climate change,

the human being is subjected to a lot of toxic aggression.

"The stress, the poor quality of rest, in addition to drinking less pure water and the nutritional loss of the food we eat. Now speed predominates," details the ALCE doctor.

"All these factors are an incentive for attacks on our body.

An immunosuppressed system will favor the contraction of the disease

and the severity of its symptoms," adds Navarro.

Throughout history, many people will have been infected by

, "since the appearance of the bacterium dates back to human existence", but there are many who have not developed the disease.

"Otzi, the snowman is an example"

The ice man was found in 1991 in the Ötzal Alps, when his body was tested for Carbon 14, the researchers found the

In addition, the change in the migratory routes of the birds also favors the spread of the tick through different territories where they had not been found before.

"In a city park it is difficult, although not unlikely

"But, for there to be Lyme disease, a significant volume of infected

is needed , since it is not born with the bacterium, it has to feed on the reservoir," the Seimc spokesman emphasizes.

Be that as it may, the tick may be waiting in any thicket.

For this reason, the specialists agree on "using

when carrying out activities in the field, as well as wearing socks over pants," adds Navarro.

In addition, it is important

to walk through the center of the paths

avoiding stepping on leafy areas or with tall grass and,

when you get home, "check the body"

In the case of returning home with "a new mole", it is important

to have it removed.

or another type associated with another disease, and would also allow the laboratory to know if it is infected with

or by another agent", since the Bacteria proliferate as time passes.

"When I started in the world of ticks

there were three infectious agents, now there are more than 14

diseases that can be transmitted by this vector," concludes Oteo.