100% creation - Éric de Meyer, excellence and creative power at the Palace of Versailles 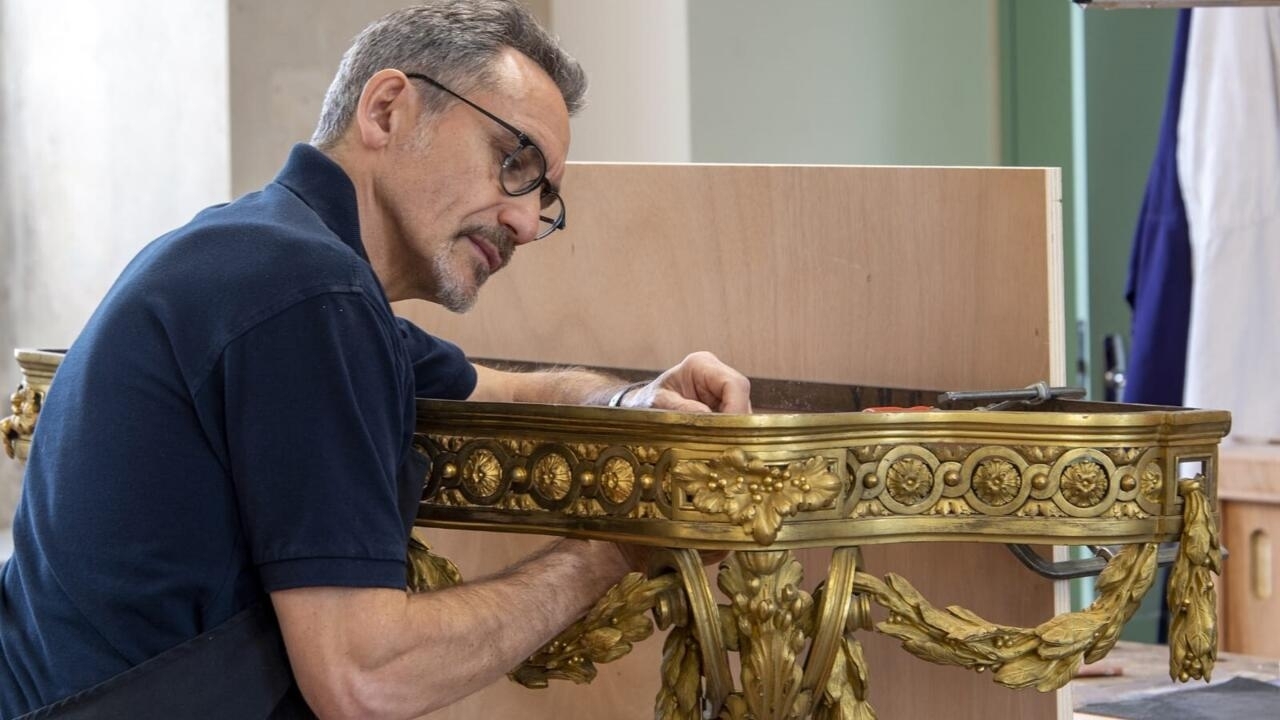 Éric de Meyer, excellence and creative power at the Palace of Versailles

This summer's series of 100% creation is dedicated to the craftsmen of the Palace of Versailles.

Today, Éric de Meyer, manager of the cabinetmaking-furniture restoration workshop at the Palace of Versailles for 20 years.

He is at the head of a team of four people based in the workshops of the small stables opposite the Château.

This team restores, varnishes and decorates furniture from the collections of the Palace of Versailles.

The Château has 7,452 pieces of furniture.

The cabinetmakers work on unique pieces, and therefore, restore exceptional furniture with a history linked to heritage.

I am surrounded by things that were created at the end of the 17th, 18th and even in the 19th century.

The creative process is constantly in question in my mind.

Éric de Meyer is in charge of the cabinetmaking-furniture restoration workshop at the Palace of Versailles.

With a classical training as a carpenter-cabinetmaker, he worked in various workshops and in luxury fittings.

Interested in period furniture, Éric de Meyer turned to this genre, more specifically to collections in castles or museums.

My attraction was then towards excellence, each time, that is to say up to the Palace of Versailles

It was in 2001 that he arrived in Versailles.

It's a hard material, but at the same time fragile, it breaks down, it can break easily, splinter.

It's a complicated and difficult material, that's what attracted me.

Above all, it is a material that was not messy.

I liked the chips.

I have always worked with wood.

As a child, I tinkered a lot.

It is a vocation.

It suited me well, there is a lot of geometry, everything was visual and my attraction was then towards excellence each time, that is to say up to the Palace of Versailles.

The Palace of Versailles

is a laboratory of innovation and modernity.

The first pieces of furniture, which subsequently set the tone for all of Europe, were first delivered to Versailles for the royal family.

Working for the Palace of Versailles means preserving and safeguarding a heritage.

We must not distort this heritage, we must keep it in its state, respect the material and follow a protocol of ethics.

It's a job with the curators, they in their specialty, because they are still legally responsible.

We bring them our expertise as technicians.

This relationship with the Conservatives pleases me very much.

Each time, it is a debate to know what we do around this furniture.

These are collections, they belong to the heritage, that is to say to everyone,

Eric de Meyer, head of the cabinetmaking-furniture restoration workshop at the Palace of Versailles © Maria Afonso

The creative process was at its peak in all areas

For Eric de Meyer, working at the Palace of Versailles means being at the heart of the challenges of the creation of the craftsmen who were in the service of Louis XIV.

We are surrounded by works which, in their time, were very modern.

The creative process was at its peak in all areas.

We, here, it's the same thing, there is a creative process that we learn at school, we start from the material, from our desires, we create operating modes.

What is fascinating, in the system of creation, is that here, we are in the beautiful and the useful.

A chest of drawers is used to store, a table to work on, a chair to sit on.

How, from an everyday object, to make it beautiful!

For those who have an innovative spirit, it is in their creative power

A profession of carpenter-cabinetmaker which is becoming increasingly rare, which must be valued and made better known, he likes to say.

We are always worried about the next generation.

Are there vocations, young people who would be interested?

My message: there are trades, wood trades, in general, trades that are rigorous, difficult, but which allow you to have a form of freedom, then, by becoming your own boss.

For those who have an innovative spirit, it is in their creative power.

Find all the episodes of 100% Création on: Apple Podcast Castbox Deezer Google Podcast Podcast Addict Spotify or any other platform via the RSS feed.