Third confinement of San Fermín: the cattle of Escolar leave the first two gorings of the festivities

Many people in Pamplona. First weekend after three years of abstinence. Overcrowding, you could say. And the remedy, the bulls of Escolar, which have made their way to... 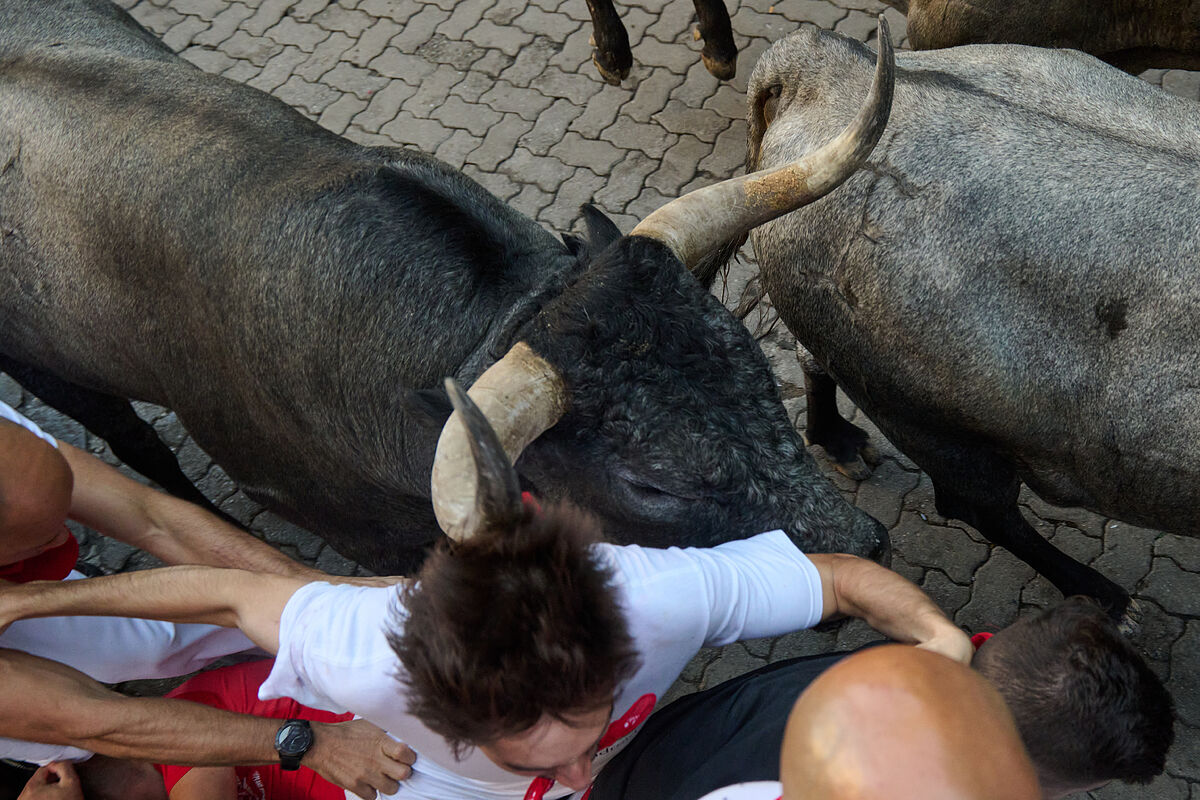 Many people in Pamplona.

Overcrowding, you could say.

the bulls from Escolar

, who have made their way to the bone, imposing their stride, their considerable speed and terrible antlers to get in front of them.

The law of the bulls of José Escolar.

The section of Santo Domingo

, from the first meters, has instilled respect in the young men, those who run and those who try to watch the herd pass from the sides of the street: The horned men threw to one side and not to the other only looks, but also

Luckily, they have not reached meat on any occasion.

The bulls have been opening a gap slowly, without pause, leaving the halters behind to lead the group.

The bulls ruled in Mercaderes.

Also in the curve of the Estafeta,

where a Escolar has arrived at the head and there has hardly been a collision with the fence.

At this point the first serious incident has occurred.

One of the morlacos has first run over a young man, then two or three more.

And they have been

trampled, crushed by the hooves

of animals on the left sidewalk.

Lots of violence in Estafeta

The last of the bruising bulls has been somewhat behind, but has been focused on the race at all times, following a halter, and has not managed to connect with the herd throughout the entire route.

there have been good races, yes.

And I enjoy good runners.

But above all there have been pushes, grabs, a Canarian fight between the runners who tried to gain a foothold in front of the chilling antlers of José Escolar's men.

Several pushes with the pythons

, with the blades of the horns.

One of the runners has even been about to take a kick in the middle of the race.

And the scenes have been repeated in the section of

, where the bulls that were ahead have literally swept the right side of the fence and have taken several young men ahead.

Some of those who were running.

And others who passed by, oblivious to the presence of the bulls, as if they were in a children's playful activity.

The José Escolar bulls will be fought by Joselito Adame, Rubén Pinar and Javier Cortés.

The balance has been two wounded by bull horns in the Mercaderes area and in Espoz and Mina.