A city that radiates the colors of life.. Dubai with an Austrian feather

&nbsp;“A city full of life in which heritage blends with all forms of contemporary.” In this image, the Austrian artist Marie-Therese Madani expresses her impressions about Dubai in her exhibition entitled “Towards Tomorrow”, which she completed within the artistic residency program after spending three months in the 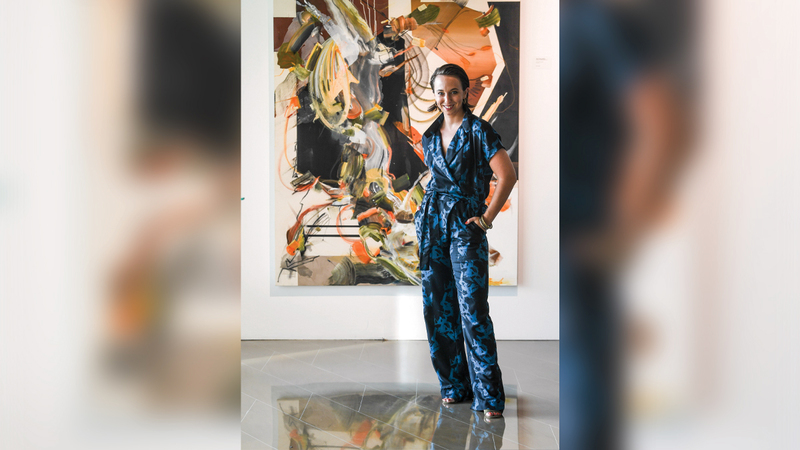 Marie-Therese paints her abstract paintings after the "artistic residency"

A city that radiates the colors of life.. Dubai with an Austrian feather

Marie-Therese confirmed that the artist-in-residence program supports the creator and expands his audience.

“A city full of life in which heritage blends with all forms of contemporary.” In this image, the Austrian artist Marie-Therese Madani expresses her impressions about Dubai in her exhibition entitled “Towards Tomorrow”, which she completed within the artistic residency program after spending three months in the Emirates. The colors in her abstract paintings carry the spirit of the desert, so they tend to brown and golden with strokes of orange that take the recipient to the colors of the sun at sunset.

The artist produced works in which the color space intersects between white and calm colors, and a few strokes of strong colors.

And transformed the vitality of the city of Dubai into an art form that expresses the momentum of the present time in a balanced and lively manner.

The brown and orange tones dominated the business spaces prominently, as if they were crossing the winds through the colors according to forms through which they regain their movement in nature.

This combination of dark and calm colors prompts the exhibition visitor to contemplate the city that the artist seeks to translate through paintings between calm and noisy, or between stillness and noise.

The color combinations combine abstraction and expression to lead the viewer to engage in a touching emotional dialogue with himself.

Marie-Therese builds her painting according to layers that take into account the color gradation, so we witness the colors descending on the canvas, and we find that there are shadows in the work to show through the strong reflection of the light, as if she presents the concept of cities radiating with the colors of life in a strong way.

Marie Therese told "Emirates Today": "I came to Dubai at the beginning of last March, and worked on a lot of research, and in the beginning I was keen to understand the general mood that dominates the emirate, so I stayed for a month in Dubai before the start of the artistic residence project for research and viewing. Because it is the vision and research of the city that reflects the depth of work.”

She added, "It cannot be said that the inspiration came from one source in this city. The diversity in Dubai makes the artist receive inspiration from many details, and what is remarkable in Dubai is the possibility of drawing inspiration from the past, but with a renewed vision heading towards the future."

The artist Mary resided mainly in Dubai Marina, especially at the beginning of her visit, and moved to more than one spot in it, including the Al Khor area, noting that she found that the general atmosphere is completely different from one area to another in the city, explaining that she initially worked on small drawings, and transformed them To large paintings it developed over time of residence, as well as with the change of the size of the artwork from small to large work.

Earthy colors stand out in the Austrian artist’s paintings, and she explained that this mimics the colors of the desert, and this is why brown and golden sand dominate, pointing out that there is an overlap between the desert and the city, so it was difficult for her to determine the starting or ending point in the desert in this city.

Marie Therese saw that travel carries many challenges, and commissioned work puts the artist in front of new and different challenges, he must present the effects of the place on him and his impressions about him, and this often requires a long period of time, stressing that these effects will appear in her future works naturally. and automatic.

She noted that she was impressed by the colors and reflections here, "especially since the winds in the Emirates seem as if they are embracing a person," praising the programs of the resident artist, which support the creator and give him the ability to present his projects and expand his audience network.

It is noteworthy that Marie-Therese was born in 1993 in the Austrian capital Vienna.

The motive that she relies on in her artistic practice revolves around “launching a dialogue” that allows the viewer the opportunity to communicate with the works and interpret them independently.

The artist’s work in her exhibition “Towards Tomorrow” was inspired by her stay in “Jumeirah Creekside” for three months, so she created artworks that were inspired by the city’s atmosphere.

The exhibition, which is her first, finally concluded.

“Demonstrating our commitment to art and design, we continue to organize the artist-in-residence program in an effort to enable our guests to live unforgettable moments through art by allowing them to discover the new works of several From the brightest names and supporting emerging artists from all over the world, thus cementing our position as a distinct creative destination.”

He added, "We welcomed the artist Marie-Therese, and we look forward to enhancing the interaction of visitors with the city of Dubai and continuing to organize this inspiring series of artist-in-residence programmes."

“Inspiration does not come from a single source in this city. Diversity makes the artist receive it from many details, in addition to the possibility of drawing inspiration from the past, but with a renewed vision heading towards the future.”

“The commissioned work puts the artist in front of new challenges. He has to present the effects of the place on him, and this often takes a long period, and these effects will appear in my future works automatically.”

Marie's months spent in the Emirates as part of the artistic residency program.