He decided to withdraw the military from the tripartite dialogue mechanism... Is Al-Burhan maneuvering to confuse the opposition, or will he return the army to its barracks?

Wagdy Saleh, spokesman for the Central Council of the Forces of Freedom and Change in Sudan, called on the head of the Sovereign Council, the commander of the Sudanese army, Abdel Fattah al-Burhan, to step down and hand over power to its true owners. 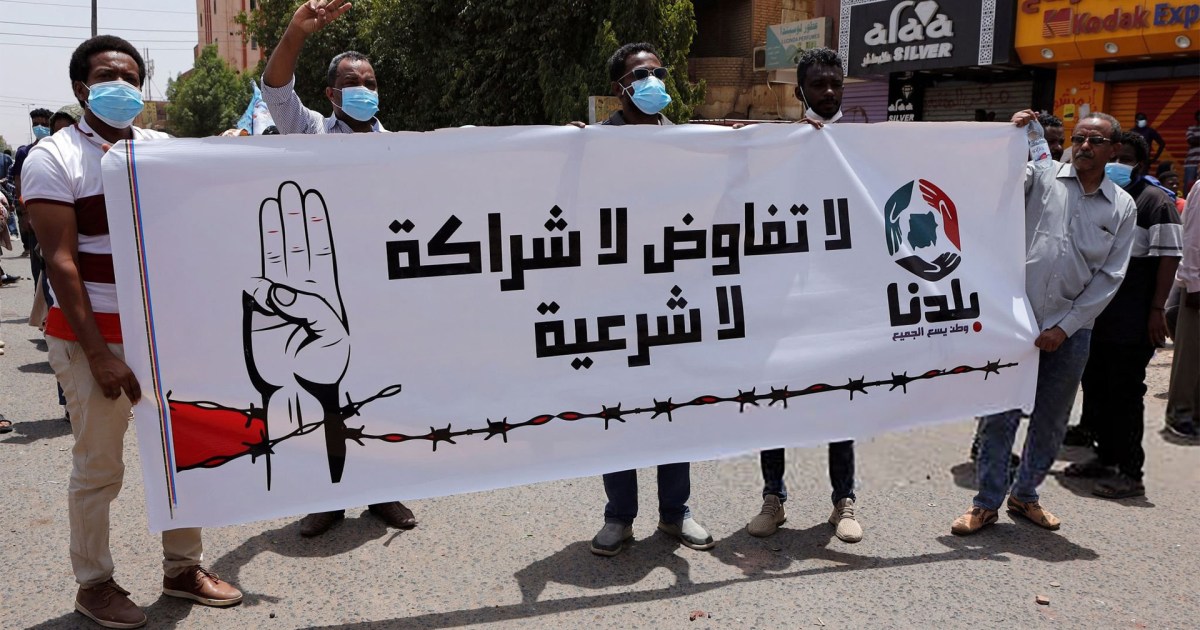 Commenting on Al-Burhan's recent speech, the spokesperson for the Central Council of the Forces for Freedom and Change described the decisions contained in it as a "tactical maneuver", and said that he tried to escape from the real crisis, which is the coup of last October, and that he seeks to impose himself as the guardian of the Sudanese people. After he received all the powers and became the sole ruler.

He added to an episode of "Beyond the News" program, that what he called the coup authority in Sudan does not want to hand over power to civilians, with evidence that it is talking about a government of competencies that determines its shape and specifications, stressing that the Sudanese people will take power from them through The path of revolution and movement.

The Sudanese guest also stressed that free and fair elections do not take place under military rule.

And Al-Burhan announced yesterday - in a speech broadcast on Sudanese television - the withdrawal of the military institution from the dialogue of the tripartite mechanism, which is composed of the United Nations, the African Union and the East and Central African Development Community (IGAD).

He said that the goal is to allow the political forces to form a government of independent national competencies, and that after the formation of the new government, the Sovereignty Council will be dissolved, and a Supreme Council of the Armed Forces will be formed, consisting of the army and the Rapid Support Forces, which will be responsible for security and defense tasks in the country.

The guest also criticized what was stated in the speech of the head of the Sudanese Sovereign Council regarding the dissolution of the Sovereignty Council and the formation of a Supreme Council of the Armed Forces.

The intransigence of political forces

On the other hand, retired Major General Badr El-Din Abdel Hakam, a former researcher at the Higher Academy for Strategic and Security Studies, defended the decisions taken by the head of the Sovereign Council, the commander of the Sudanese army, and linked them to the political crisis he is witnessing, which he said may slip into a civil war, in addition to intransigence. The various political forces he accused of seeking to monopolize power and alienate the military component.

The guest of the "Beyond the News" program confirmed that Al-Burhan calls on the political parties to sit at one dialogue table without isolating any party, leading to the formation of a government of competencies, provided that he hand over power after that, and said that the previous partnership between the civil and military components was a failure in everything.

On the other hand, the retired Major General said that the Sudanese left has a clear strategy, because it wants to rule, and demands the dismantling of the armed forces because it sees it as an obstacle, although its previous experiences confirm that it did not obtain significant results in the elections, and the same is true of the Baath Party.

It is noteworthy that the Sudanese street is witnessing a state of congestion after the expansion of the sit-ins carried out by the resistance committees in the three cities of the capital, in protest against the bloody events that took place on June 30, in which 9 demonstrators were killed by the security forces, and 629 others were injured to varying degrees, according to the committee. Central Doctors.