Goodbye, obligatory bra: from Schiaparelli and generation Z to Sex in New York

Between the flowers and the references to the work of Yves Saint Laurent or Mugler, the Schiaparelli Haute Couture collection conceived by Daniel Roseberry once again influenced what... 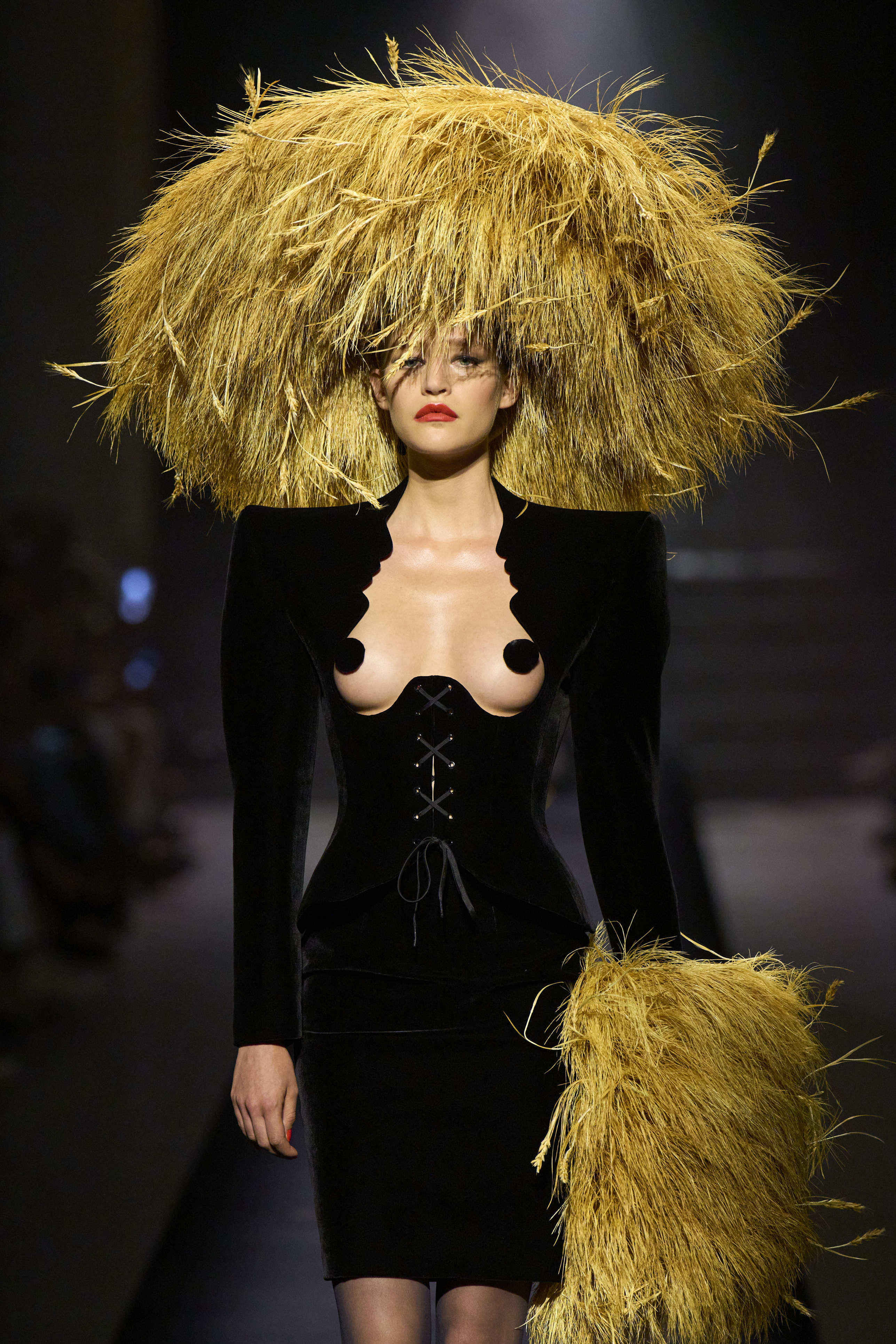 to the work of Yves Saint Laurent or Mugler,

once again focused on what has become a hallmark of the house: surrealism (yes, Elsa's own) on the

Because although the American who has revolutionized the historic house has had a communicative 'best seller' in figurative and monumental jewellery, the truth is that using fabric to

highlight that area of ​​the body

could be another one of your key coordinates.

This has happened in recent collections (spring-summer 2022, for example, has inspired several tops that have been seen in fast fashion brands) and has been repeated in the latest Haute Couture bet.

That focus requires the absence of a bra.

Already in the second styling of the proposal, the corset from which a kind of transparent mesh emerged left the breasts, nipples included, of the model exposed.

She also wore a dress whose neckline outlined the silhouette of her chest and, yes, she had the addition of two velvet circles that almost bring back memories (saving distances) of burlesque.

But with the permission of the necklines that made it impossible to wear any type of traditional bra, this idea of

reached its maximum expression in the outings in which the asymmetrical necklines were lowered to leave a breast in the air, only

covered by a flower

or in the penultimate look whose protagonist was a long velvet skirt, a wide-brimmed hat and

"taking a breast out in the pure Delacroix style"

, although he is one of those who, perhaps, has managed to veil (if not eliminate) the trace of sexualization that serves him to certain social networks as an excuse to censor female breasts.

A fact that far from being an anecdote, is a real online war that usually resurfaces every summer and that has even led brands like

to have to blur nipples in their ads.

renunciation of the bra

cannot be understood without that vindictive and political vis, but the truth is that although

already seems to have understood that the bra is

an accessory and not the corset of the 21st century,

this idea goes back much further.

And no, you don't even have to go back to the youth revolution or the hippie movement that left its mark on the aesthetics of the moment, but rather

and series such as, for example,

Here is a television product about four young women who are maturing and talking about worldly and profound problems, economic and personal crises, sex, love and friendship.

Many times, with bare breasts, especially in bed scenes.

Many others, wearing tops without a bra as it should be done: with all the naturalness in the world.

Except for that chapter in which Samantha buys some nipple shields to precisely highlight the fact that she goes without him.

aesthetic , bras were conspicuous by their absence in the outfits of

and that, following that wake but with a much more relaxed and less sexualized spirit,

do the same, especially when there are 'tank tops' or thin straps in the equation.

That they could wear another type of bras that hide the straps?

That neither they nor hundreds of thousands of women see it as necessary?

Especially after the pandemic, which made supportive bras disappear from looks.

Of course: it cannot be ignored that most of the celebrities (because they are the ones we know) who have decided to go without a bra

and, therefore, there are no physical contraindications such as back pain that lead so many others to have reductions. of chest

The curious thing about this trend is that the elimination of the bra from catwalk and daily outfits does not imply burning the undergarment in the hand, but rather a

It is no longer mandatory, but a piece that can

one more element of the look that does not have to be hidden.

That idea has been seen, like many other issues, accelerated by confinement.

While fashion sales plummeted in those months,

the intimate apparel and 'homewear' categories remained stable or grew,

a trend that has continued for some time afterwards: the study carried out by

"fashion consumption in the The first quarter of 2022 has recovered" (from January to March 2022, sales were 14.9% higher than the previous year),

and although intimate fashion has evolved moderately, it is still positive.

If the numbers are distracting, let's put the following fact on the table:

Inditex, which does not stitch without thread, included Zara's lingerie category in its online version

, but the opening of its largest store in the world in

It has its own testers, its own box and its own packaging.

If that's not trusting underwear, we don't know what is.

Of course, they do

This is precisely what

is aiming for by dispensing with the bra and resorting to other adornments.

To hedonism, not to imposition.

"I don't know why our boobs are so scary/ Without them there would be no humanity and no beauty/ And you know it well."