Eduardo says that he wants to die on stage with everything on top: the glitter on his lips, the wig and false eyelashes on, and the glittery glittery dress. In fact,... 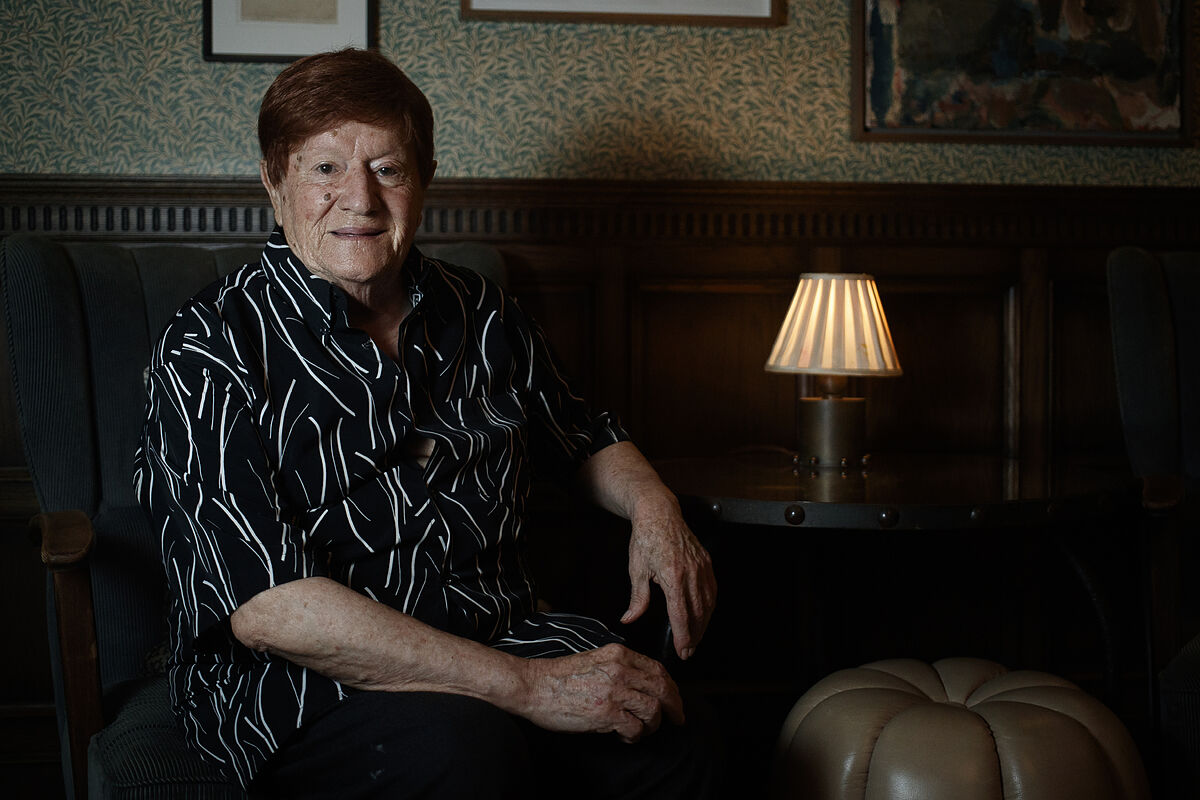 Eduardo says that he wants to die on stage with everything on top: the glitter on his lips, the wig and false eyelashes on, and the

Actually, it is Gilda Love, a proud

, a transvestite by profession (already retired although still open to offers, at 150 euros a bolo), a fan of Rita Hayworth and a neighbor in the heart of the Raval neighborhood. , whom he continues to call

Eduardo is the protagonist of

Singing on the rooftops

, the film is a perfect mixture of fiction and documentary that reflects with extraordinary naturalness, optimism and a delicate and poetic realism his day to day: the ailments, the memories of so many magical nights, life leaning out of a balcony of Riereta Street... until the unexpected arrival of a two-year-old girl, Chloe, whom she will have to take care of, will change everything.

Eduardo is probably the last

queen in Barcelona's Chinatown, and

Singing on the rooftops

has something of a tribute to a generation in full twilight to which tributes have come rather late, "although better late than never," adds Ribes.

Eduardo was born into a large family even for the time.

His mother had 20 children, of whom 16 survived. He came with

who died in childbirth, the umbilical cord wrapped around her neck.

«I was born with a little sister and I think that her contact with her at that time made me so feminine.

I always liked stickers, butterflies, flowers... I was never too manly », he recalls.

"My mother told me that I had taken her beauty," Eduardo recounts in her show, where he always explains the story of that absent sister, of that double who was not and who seems to remember every time she gets together.

"I always knew I was gay, ever since I was very little," confesses Eduardo.

His brothers made his life impossible, the mistreatment was systematic and horrible.

set it on fire

He burned his hair and his back, where his scars remain.

At six they put him in a water well when they found out that he was going to sing somewhere.

The two brothers who were most cruel to him were twins, one year older than Eduardo.

Today they are 97 and both live with their husbands.

"They were hidden gays!"

explains Eduardo, who does not talk to them.

«Six brothers are left alive, but I only deal with one.

I was always the one who helped the most, because I have earned a lot of money and I have also spent a lot.

With the nephews I speak more ».

Eduardo's life is, deep down, the story of a constant flight to a less hostile place.

The family first emigrated to Algeria because his father was a Freemason.

Back in San Fernando, Eduardo asked to become an altar boy in the church.

«My brothers were waiting for me at the exit to beat me up, but at least the sacristan accompanied me home.

they had me sentenced

She wanted to leave home so much that after her military service she never came back.

She tells it on her show, in one of her jokes.

«My mother told me: Eduardo, you have to go to the military to become a man.

Before landing in Barcelona to dedicate himself to cross-dressing, after Franco died, he was in the Legion.

He then went to France: first to Marseilles and then to Paris, where he met Madame Arthur, cut his teeth in

and spent another nine years.

«That's where I met many drag queens, Capucine, Bambi and the first transsexuals.

I have never thought about surgery.

Mine is the show and that's it », he confesses.

The dilapidated apartment is almost another protagonist of

Singing on the rooftops.

Humble beyond measure, dark, with walls that seem about to fall, Eduardo's particular temple is lined with photographs of the stars of golden Hollywood, with a special role of Bette Davis and

, whom Eduardo met when I worked in Paris.

"It was at Maxim's, on the rue Royale.

He was with Ali Khan, a prince who was gorgeous.

She was very nice », he recalls with sparkling eyes.

By then, Eduardo had already seen

and had put the title of the film as her stage name.

I loved the slap!

It seemed that they gave it to me.

"Now I am more relaxed.

I don't even have a file with the Police after so many years working with transvestites, and look, I've had fights, because there was a lot of envy».

Eduardo lives on a meager pension and in the film he complains, with a flirtatious and bittersweet edge, that the banks are the only ones that send him letters.

the threat of eviction

hover over the entire film, which reflects the precariousness of a generation, that of the first transvestites, with a professional and personal life that always vacillated between nocturnal glory, persecution and social ostracism.

Ribes met Eduardo seven years ago, when he shot his first short film where he portrayed the figure of this survivor who seems to have come out of a Jean Genet novel.

Today they are close friends despite the age difference and, since the pandemic, they spend Christmas Eve together.

The Catalan director explains that

Singing on the Rooftops

is also the portrait of

in the midst of late Francoism.

They did it in a rogue neighborhood that has changed a lot, even its name, which we now call Raval, "of which the bad is always told."

«I wanted to shoot a film that reflected all of Eduardo's humanity, which is extraordinary.

We are very close friends and his stories have always had a great impact on me.

The film is nothing more than an attempt to prolong our friendship.