"Happiness to Ten Thousand Homes" goes out of the circle with real fireworks, Youku expands the content boundary of summer files

Last night, the rural revitalization reality drama "Happiness to Ten Thousand Homes" reached 10,000 hits on Youku, and continued to win the top spot on the lighthouse, Maoyan, Yunhe and other hot lists. For the first time, the play focuses on the development process of the countryside from material civilization to spiritual civilization, and is welcomed by the audience with its down-to-earth sto 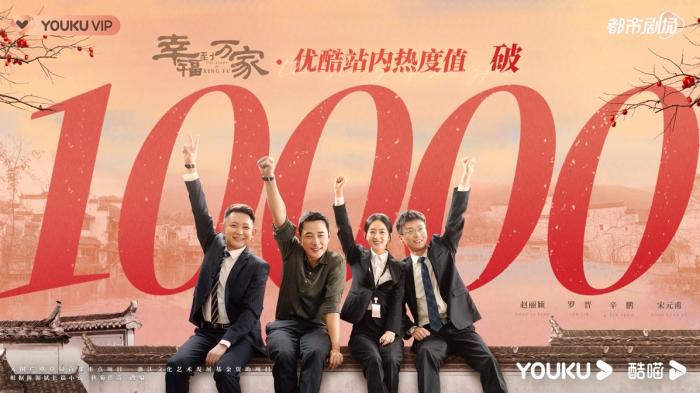 Last night, the rural revitalization reality drama "Happiness to Ten Thousand Homes" reached 10,000 hits on Youku, and continued to win the top spot on the lighthouse, Maoyan, Yunhe and other hot lists.

For the first time, the play focuses on the development process of the countryside from material civilization to spiritual civilization, and is welcomed by the audience with its down-to-earth story and fast-paced plot.

Youku's differentiated scheduling has also broadened the content boundaries for the summer archives of the video platform, which has traditionally been historically based on costume dramas and romance dramas.

"Happiness to Ten Thousand Families" is adapted from Chen Yuanbin's novel "The Legend of Qiu Ju", co-directed by Zheng Xiaolong, Liu Xuesong, Yao Yuan, screenplayed by Zhao Dongling, starring Zhao Liying, Liu Wei, Tang Zeng and others. It tells the story of the rural girl He Xingfu (played by Zhao Liying) After going through multiple tests of career, marriage, love and family, it has grown continuously, entered the city from the countryside, and then returned to the countryside from the city, and finally led Wanjiazhuang to realize the inspirational story of material civilization, spiritual civilization, legal civilization, and ecological civilization.

With a solid realistic expression, the play created the "Dare Sister" image of the heroine He Xingfu, who grew up bravely in the conflict, which aroused strong resonance among netizens.

Thanks to her disdainful efforts, the village finally stopped the custom of making marriages, and the village-run enterprises also stopped polluting, realizing the truth that "lucid waters and lush mountains are invaluable assets".

Since the broadcast, "Angry" and "Relieving" have been on Weibo hot searches one after another, becoming the audience's intuitive feedback on the show's full-bodied characters and tension-filled plot.

"Happy wedding dress is the same as what I wore back then" "There are children running all over the floor, this rural flowing water mat is too real"... In the barrage, the details of rural life reflected in the play also made many viewers feel immersed in it.

In the plot updated last night, after solving the marriage troubles, He Xingfu quickly kneaded dough, pancakes, and made a table of hot meals. The scene where the whole family surrounded them was also very moving. Many netizens sighed, "It's good to be able to eat with your family. the happiest".

There are frequent costume dramas and romance dramas on the video platform in the summer, so the phenomenon of homogeneous content concentration in this period has gradually formed.

The differentiated scheduling and broadcast of Youku's launch of the reality-themed boutique "Happiness to Ten Thousand Homes" has also broadened the content boundaries for the summer market.

Under this content standard, in recent years, Youku's reality themes have exploded frequently. The "Awakening Age" co-produced by Youku describes the glorious course from the New Culture Movement to the establishment of the Communist Party of China, becoming the most influential domestic drama in 2021; "Meritorious Service" records the great deeds of 8 recipients of the "Medal of the Republic"; "Procuratorial Circuit" tells the story of prosecutors safeguarding the people's justice and legal authority in the new era, both of which have won the love of netizens.

Next, Youku has a number of good reality dramas to be broadcast, including the second part of the "Love Full of Love Series" directed by Liu Jiacheng, "Love Full of Nine Roads", which tells the war drama of young Red Army soldiers fighting bloody seven days and seven nights at the Songmaoling position. "Blood Battle at Songmaoling", and "The Right Way to Open Life" starring Huang Bo and Mei Ting, etc.