The Diplomatic Question.. Kissinger and Lessons in the Dark Arts

If we were to look at an experiment that combined all the contradictions of diplomacy, we would not find a better man than Henry Kissinger to sit on its throne. This is not a special position on the man, as much as it is a rule that the political elites in the West chose. 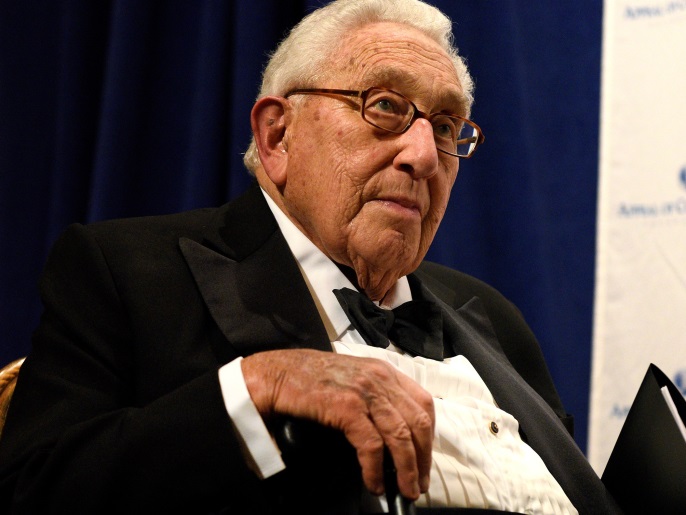 Diplomacy has been described in many ways;

Most of them are desirable, and the virtues of intelligence, cunning, civility, tact and elegance have been measured against them, but some of their descriptions have been colored by the practices of the few who were entrusted with them, or who were entrusted with their care, or they were colored by their style and the pattern of their appreciation.

Examples of the good and the bad are not exhaustive, and the lines of this article cannot be summed up.

However, if we want to look at a single experiment that combined all the contradictions of diplomacy - with its positives and negatives - we will not find a better one than Henry Kissinger to sit on its throne.

This is not a special position on the man as much as it is a judgment that was favored by the political elites in the West, including the institution of the first diplomacy in Washington;

Realism in the foreign policy that Kissinger adopted as a method of his work, and with all the successes and failures that accompanied it, is no longer acceptable in today's world.

Kissinger is approaching his second century, as he celebrated at the end of last May his 99th birthday.

His life document says that he saw the light on May 27, 1923 in Fürth, Germany, and his parents immigrated to the United States of America in 1938, when he was 14 years old.

He has now reached a very old age, but despite this he still insists on reminding everyone that he is still among them, with his full awareness, energy and ability to remember and compose;

This is despite the fact that Washington seemed not to care about him much after being exhausted by his bloody realism, so much so that it wanted to erase his impact within the walls of his ministry and turn his page in its best records, before he completes his 100th year, as President Joe Biden’s defense of withdrawing from Afghanistan is a declaration of a decisive break with An exemplary tradition of American foreign policy, the so-called "liberal internationalism", dates its beginning with Woodrow Wilson, and which reached its zenith in the 1990s with George W. Bush Jr.

They are Konrad Adenauer, Charles de Gaulle, Richard Nixon, Anwar Sadat, Lee Kuan Yew, and Margaret Thatcher, and it was published in a book entitled "Leadership", and explained by a sub-title referring to "Six Studies in International Strategy".

It was the prevailing view of the American right of the end of the Cold War, which was at the head of Kissinger and his ideologues;

Is that the United States must impose economic power through sanctions, and not object to the use of military force to compel other countries to adopt liberal democracy and the market economy, and advocate the embrace of Western values ​​under the pretext of supporting human rights, which President Jimmy Carter sought to show by linking American foreign policy with the principle of Moral, in a moment of weakness brought about by the disastrous military and moral defeat of the Vietnam War and the occupation of the US Embassy in Tehran.

George Bush took that defeat - according to the neo-conservative translation of the liberal international - away from its goals by invading Iraq and Afghanistan, trying to invade Somalia, and seriously thinking about occupying Sudan.

Contrasting this - in terms of concept and practice - the rules of international law, and the "Westphalian" system, which prohibits states from interfering in the internal affairs of others.

Despite what adorned Kissinger's biography of slanderous and reprehensible epithets that ranged between the wise and the malicious, the clever and the fox, and the nimrod of darkness;

For there is no more correct description of him here than what Christopher Hitchens once said of him, who said of him that he was an "amazing liar with a wonderful memory."

And that both qualities - a liar and an amazing one with a wonderful memory - are prizes in our eyes, and the eyes of many, but Andrew Anthony wrote - in the issue of the Guardian newspaper issued on Tuesday, June 21, 2022 - that regardless of the first part (a liar ) from this description, but Kissinger, at the age of 99, seems intent on corroborating Hitchens' statement in Part Two (amazing with a wonderful memory);

He is conscious of chronicling a realistic American diplomacy that built its glory, writing about everything, even artificial intelligence, and turning the pages of the political history of the world's major capitals and the virtues of their contemporaries among its leaders.

He does not leave one of the world's continents without landing on a metropolis in it, and the credit for its role in global politics is proven to one of its leaders and the merits of his charismatic leadership.

Andrew Anthony said that while many people of this age struggle to remember their names;

They are Konrad Adenauer, Charles de Gaulle, Richard Nixon, Anwar Sadat, Lee Kuan Yew, and Margaret Thatcher, and it was published in a book entitled "Leadership", and explained by a subtitle referring to "Six Studies in International Strategy".

In this book, Kissinger, a geopolitical guru, is more concerned with how leaders act on the world stage than at home, for example, less interested in whether they lie to their parliaments, violate their laws, or persecute their people.

Kissinger, who was National Security Adviser during the rebellion in Bangladesh, stood against the US government's demand for Pakistanis to avoid violence, at a time when adhering to his realism was a painful immoral policy, as the Bangladeshi capital, Dhaka, was haunted by violence day and night, bleeding profusely and without pain.

However, Michael Schaefer sets the truth about which we are dealing, with a question in which he considers a lot of diplomacy to be "the embarrassment of the state", as it was published in his column "Capital City" in POLITICO magazine, published Friday, June 24, 2022, under the title "" Is the State Department hunting Henry Kissinger?” This means that the US State Department honors - at the end of June 2022 in an official ceremony - “a diplomat who paid a heavy price for bypassing the master of realpolitik,” by allocating a special conference room called “Archer Blood”, to commemorate He is remembered as an American diplomat who served as consul for his country between 1970 and 1971, in Dhaka, East Pakistan, now the capital of Bangladesh, and who in 1971 protested the bloody and appalling crackdown by a US ally in Islamabad.

Schaefer concludes that it is likely that another unspoken name will still reign supreme: Henry Kissinger, the former secretary of state most closely associated with America's support for these atrocities, and with what many scholars now understand as "genocide."

So, it's not hard to interpret this honor as a tacit slap to the 99-year-old master of realpolitik, whose immoral diplomacy produced "a lot of blood" and who had seen his career derailed by Archer Blood's protest.

In our estimation, this does not mean that Kissinger will be billed as "end of service" in this way, as the matter is nothing more than a "celebration of one's heroism", and not "teasing his opponent", despite the significance of the occasion explained by Kelly Kidderling, Deputy Assistant Secretary of State in the US. The South and Central Asia office said, "After 50 years have passed, we are thinking again about the values, which were required at that point, and we hope to continue to maintain these values ​​as part of our professional ethics." I see no clearer intent than this as an "institutional reprimand." for Kissinger"

Rejecting what his realistic policies were, which stood with all the excesses;

A demonstration of the logic of power, and the conclusions of political realism.

Therefore, we are witnessing - on this and other occasions - a situation that is very different from everything that was represented by Henry Kissinger, the politician who led the helm of American diplomacy in its darkest turns, and not as the strategic preacher who now heralds the bids of artificial intelligence or leadership style for leaders not everything in their history fits that Be a role model.

In fact, the story of the "Reign of Terror" mentioned by "Blood" in a telegram sent to Washington shortly after Pakistan launched "Operation Scout", in which he says that "thousands of innocent people were massacred and allegedly guilty", and he said in another telegram, that it "Selective genocide", the American witness to the campaign against separatists in the Pakistan-Bangladesh war, which was considered at the time one of the worst humanitarian crises, and which was covered by Kissinger's veil, which was described as "malicious", only because Pakistan was providing him personally the necessary cover to continue His secret contacts with China.

Hence, it represents the occasion of the celebration of the US State Department at the end of June 2022;

The State Department's central struggle, which involves a confrontation with the White House over democratic values, national interests, and the duties of federal employees like Blood, a confrontation that - as Michael Schaefer says - seems very important politically today, no matter how apolitical or diplomatic the intent may be.