Erdogan is annoying to the West, but it is indispensable

Recep Tayyip Erdogan, who has led Turkey for nearly two decades, is an exceptional president by all accounts, as Westerners have not been accustomed to dealing with this type of Turkish leader throughout the decades of partnership. 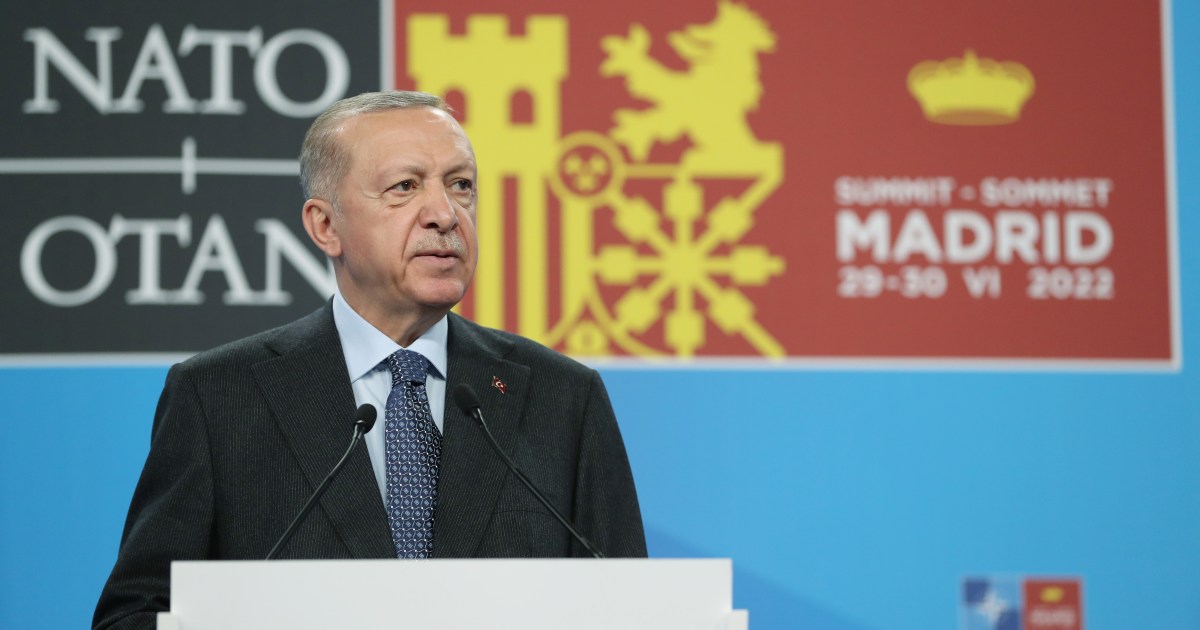 Controversy or crisis rarely arises within NATO, and Turkey does not take the lead, and its recent objection to plans to include Finland and Sweden in NATO before the last-minute settlement was the latest consequence of the bitter rift in Turkish-Western relations.

For most leaders, who sat in the middle of last week in the same room to endorse the alliance's new strategic concept for the next decade, it is not only Russian President Vladimir Putin who is defying the West.

There is also the leader of a member state of the alliance participating in their summit and forced to listen to him and exchange handshakes and fake smiles with him, although he does not hide his belief that the era of Western supremacy is over.

Recep Tayyip Erdogan, who has led Turkey for nearly two decades, is an exceptional president by all accounts, as Westerners have not been accustomed to dealing with this type of Turkish leader throughout the decades of partnership.

He has led his country towards tremendous changes both at home and in its foreign relations.

He is a feisty character who masters the art of playing on the edge of the abyss and leaves no opportunity to humiliate and extract gains from Westerners.

But he is a powerful ally who is indispensable when needed.

Since the two sides decided to calm their differences early last year, Westerners have been reluctant to work with Erdogan, believing that his country's economic turmoil might topple him in the upcoming elections.

However, the major transformations that occurred on the international scene since that period reversed the western trend.

The US withdrawal from Afghanistan raised doubts about America's global standing and was further strengthened with its tendency to disengage from the Middle East region.

The Russian attack on Ukraine has turned global geopolitical calculus upside down, and the West's priority has become to unite allies everywhere, even those who irritate them.

Dealing with Erdogan became inevitable, albeit at a price.

The recent NATO summit and the acquiescence of Finland and Sweden to Turkey's conditions in exchange for withdrawing its objection to their accession to NATO was a clear message that the West was tempted to abandon its hesitation towards Erdogan.

Never before have Western countries pledged so clearly to stop their support for the Syrian Kurdish People's Protection Units and their willingness to work on extradition to Ankara and to amend its anti-Western laws to meet this purpose.

During weeks of negotiations between the three countries under the auspices of the NATO Secretary-General, Washington has been careful to stay aloof so as not to be forced into a bargaining auction with Erdogan over bilateral issues between them.

But Erdogan's intransigence eventually forced Biden to exert his influence to settle the matter.

Understandably, US officials were quick to deny that the administration had made concessions to Turkey on other issues in exchange for persuading it to drop its veto of NATO expansion.

But Biden's meeting with Erdogan, his explicitly declaring his support for the sale of F-16 fighters to Ankara and urging US lawmakers to pass the deal indicates that the US administration eventually had to offer something to Erdogan.

Biden, as president, met Erdogan for the first time in Brussels about a year ago and agreed to mend relations.

This sudden shift in Biden's approach to Ankara stemmed primarily from the US need for a Turkish role in operating and securing Kabul Airport during and after the US withdrawal from Afghanistan.

But this need quickly ended after only 3 months due to the humiliating withdrawal and the Taliban's control of power.

In 2017, Turkey's purchase of the S-400 missile system from Russia angered Washington, which decided to expel it from the F-35 fighter jet program and impose sanctions on the Turkish Defense Industries Corporation.

Since then, Turkey has become a pariah ally on Capitol Hill.

But the trend changed after the Russian war on Ukraine, and Turkish political and military support for Kiev and diplomacy with Moscow helped Ankara improve its image in Congress, and lawmakers from both parties began expressing their willingness to pass the F-35 fighter jet deal if Ankara continued to support Ukraine.

While the Turkish position on the Russian-Ukrainian conflict stems mainly from Ankara’s close relationship with Kiev and its apprehension about Russia’s efforts to dominate the Black Sea region, Erdogan also presented this position as an interest of the West and emphasizes Turkey’s importance in the Western geopolitical conflict with Moscow.

At the present time, the West does not have the luxury to continue costly side conflicts with a major partner whose importance is not limited to supporting Ukraine and balancing Russia's influence in the Black Sea region and energy security for Europeans. Western in some areas

Turkey is a major active member of NATO and has its second largest army.

However, some Western countries have for years adopted hostile policies against it.

The United States and European countries have provided weapons to the Kurdish People's Protection Units despite their clear links to the Kurdistan Workers' Party, which is designated as a terrorist organization.

The United States has also strengthened its presence in Greece and established military bases there under the pretext of confronting Russia, but the truth is that these bases are also directed against Turkey and aim to raise the costs on Erdogan due to his foreign policies in conflict with the West.

Washington has so far refused to extradite Fethullah Gulen to Ankara.

Although Western countries hold Erdogan's management of Turkey and its foreign policy responsible for the decline in relations, this accusation reflects in some respects the West's attempt to shirk its responsibilities to bring relations to this crisis level and push Ankara to strengthen its partnership with Moscow.

Indeed, Erdogan's aggressive Western approach was shortsighted and stemmed from a catastrophic miscalculation of his risks.

It made him more aggressive towards the West, as well as spoiled some important positive transformations that occurred in Turkish-Western relations during his reign.

Turkey began negotiations to join the European Union in the first years of Erdogan's rule, but then it reached a dead end due to issues not related to membership, and the Turks were convinced that the Europeans did not want them as part of them.

Erdogan also supported in 2004 the United Nations plan to settle the Cyprus crisis, but the Greek Cypriots opposed it at the instigation of Athens.

With regard to the Kurdish issue, which emerged as one of the main issues spoiling relations, Erdogan adopted a bold approach with it by concluding a peace agreement with the PKK in 2013, but it did not hold out for more than two years due to the consequences of the rise of the Kurdish separatist project in Syria as a result of Western support for it, which restored Fueling the separatist tendency of the Labor Party.

Western steps now, such as the United States proceeding to sell Turkey F-16 fighters, addressing its concerns about the American military presence in Greece, adopting a different approach to issues that threaten the security and interests of Ankara, pushing for the restoration of confidence between Turkey and Greece, and supporting energy cooperation projects between Turkey and Greece. The Mediterranean countries and Turkey's involvement in them, and most importantly, above all, abandoning the future of relations with Turkey's elections, are all steps that would open new horizons in relations.

At the present time, the West does not have the luxury to continue costly side conflicts with a major partner whose importance is not limited to supporting Ukraine and balancing Russia's influence in the Black Sea region and energy security for Europeans. Western in some areas.

It would be hard to bet that Turkish-Western relations can return to the way they were in the past decades, but working hard with a strong Turkish leader rather than antagonizing him may help the West reverse course.

Strengthening unity and harmony within NATO is not only an interest of the West, but also helps Turkey to strengthen its position in its partnership with Russia and reduces its dependence on it in securing its basic interests in terms of its military and energy needs and some of its main regional interests.

The great shift that Erdogan has brought about in Turkey's foreign policy, even if he clashed with the West on some issues, poses a challenge to Russia's ambition to consolidate its influence in the Middle East and North Africa, just as Ankara has become a competitor to Moscow in the former Soviet space, such as the South Caucasus and Central Asia.

Despite the Turkish-Western differences, Ankara still sees itself as part of the Western system and has been defending the importance of NATO, even at a time when Western leaders were skeptical of the feasibility of maintaining this alliance and considered it brain dead.