The "soft power" of the Emirates... an impressive movement in the east and west

day after day; The culture and arts of the UAE prove its ability as a “soft power” that carries messages of acquaintance, love and peace from the Emirates to the whole world, and last month witnessed an active movement that clearly reflected the vitality and impact of the UAE’s soft power through several participations in festivals and events in 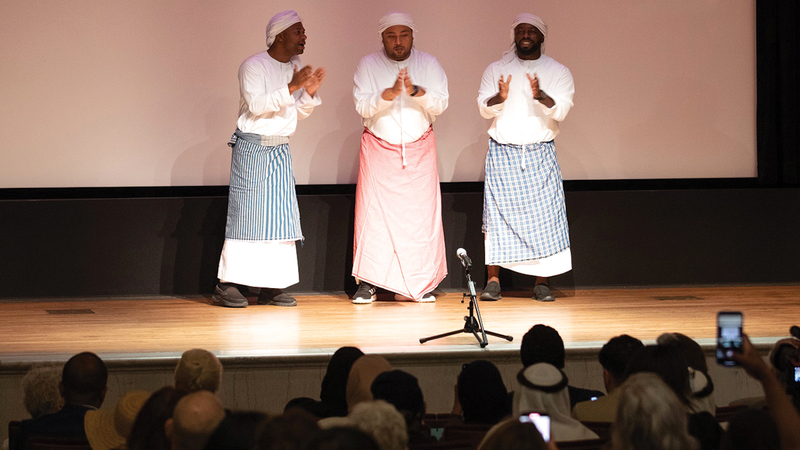 The "soft power" of the Emirates... an impressive movement in the east and west

The culture and arts of the UAE prove its ability as a "soft power" that carries messages of acquaintance, love and peace from the Emirates to the whole world. The past month witnessed an active movement that clearly reflected the vitality and impact of the UAE's soft power through several participations in festivals and events around the world.

Among the important participations that embody the concept of soft power, the state’s participation in the Smithsonian Festival of Folklore, which is held annually in the American capital, Washington, as this year celebrates the UAE through many events that took place from 23 to 27 last June, and from 30 June The past until today, organized by the Ministries of Culture and Youth, Foreign Affairs and International Cooperation, as well as the UAE Embassy in the American capital, Washington, with the aim of highlighting the history and heritage of the UAE and its cultural, artistic and creative achievements, and highlighting its role and position in hosting many prestigious cultural events that The world and its intellectuals gathered on its land.

In the heart of America

During the Smithsonian Festival, which raises the slogan “The United Arab Emirates .. A Vibrant Scene and Immortal Memories,” the Emirates presents a diverse cultural and artistic program with the participation of more than 80 craftsmen, creators and musicians from the Emirates, to introduce a great and ancient heritage of arts and culture. It also includes a wide range of activities such as workshops for creating perfumes and incense, creations of falconers, and a presentation of a bouquet of traditional folk arts such as "Al Nahma", the famous songs of pearl fishermen, in addition to introducing the country's traditional food and folk music. The festival also dedicated a market to display handicraft products from UAE and other events.

From Abu Dhabi to Paris

Emirati heritage crafts were part of the participation of the House of Craftsmen of the Department of Culture and Tourism - Abu Dhabi in the activities of the fifth edition of the “International Biennale of Art and Craft Professions” in Paris, which was organized in the Grand Palais Ivemere exhibition hall in the French capital, Paris, from 9th to 12th June.

A platform created by the French Art Workshops, the exhibition celebrated French and global cultural creativity by bringing together artisan and creative professionals alongside unparalleled artworks from around the world.

The House of Craftsmen, which aims to highlight the efforts of the UAE to preserve and preserve the traditional cultural heritage over generations and to raise awareness of traditional and creative practices and methods of Emirati handicrafts and arts, was keen to select a group of veteran and emerging creators and designers to represent artistic crafts and cultural creations in the Emirates.

Irti Contemporary Crafts Council, affiliated to Nama Foundation, also participated in Milan Design Week 2022, the most important global event on the agenda of the world of art and design, from the eighth to the 12th of last June, displaying contemporary artworks derived from the ancient Emirati heritage among the finest brands in the world Fashion and fashion inspired by the indigenous cultures of the peoples.

Irthi’s participation in Milan Design Week, which is the only official Arab body at the event, came with new and innovative collections and designs in two locations, namely the Campi Auction House and the Italian Letta Palace. In order to develop the skills and capabilities of female artisans working under his umbrella, to provide the fashion market with products that match international brands in their quality and aesthetics, inspired by Emirati life.

In a new scene highlighting the soft power of the UAE, South Korea recently announced the selection of Sharjah as the guest of honor at the Seoul International Book Fair 2023, thus joining the list of global cultural centers that celebrate the cultural project launched and led by His Highness Sheikh Dr. Sultan bin Muhammad Al Qasimi, Member The Supreme Council, Ruler of Sharjah.

The Seoul Book Fair is one of the most famous book fairs in Asia and the world, which started locally since 1954, then developed into an international fair in 1995, and represents a link between publishers, distributors and publishing industry experts on the continent, and South Korea takes it as a platform to introduce its contributions to the development of the publishing industry. Depending on its advanced infrastructure in the field of technical and scientific progress, in addition to introducing the aspects of Korean culture that are characterized by openness and communication with different cultures.

The Smithsonian's Festival in the heart of the American capital celebrated the UAE and raised the slogan "The United Arab Emirates... A Vibrant Scene and Immortal Memories."

The House of Craftsmen participated in the "International Biennale of Art and Craft Professions" in Paris, with a group of creators and veteran and emerging designers to represent the artistic crafts in the Emirates.