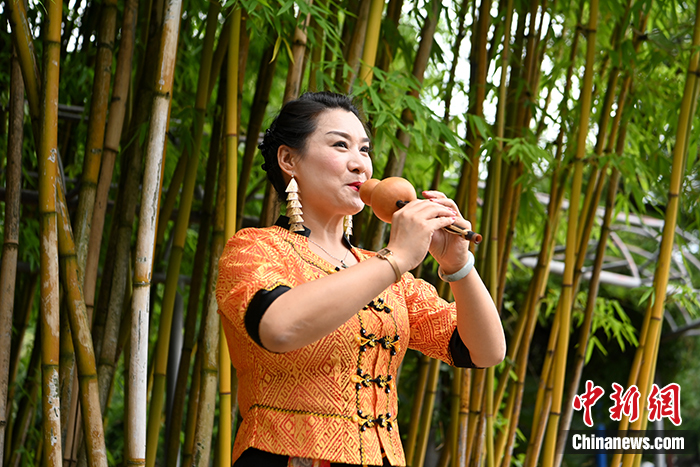 "In recent years, the Chinese Yunnan national musical instrument cucurbit flute, both the instrument itself and the form of performance, has been continuously enriched and kept pace with the times. It is loved by music lovers at home and abroad, and has become a link between Chinese and foreign cultural exchanges." National first-class performer, First-class vocal actor Jin Yehaowa said this in a recent interview with a reporter from China News Agency.

Jinye Huowa said that the cucurbit silk is an ancient musical instrument originating from the Dehong Dai and Jingpo Autonomous Prefecture in Yunnan Province. It consists of a complete gourd, bamboo pipe and reeds.

For thousands of years, people of Dai, Achang and other ethnic groups have used cucurbit silk to play their lives and express their emotions.

Dehong, located on the China-Myanmar border, is the hometown of Jin Ye Xiaowa. She grew up in the artistic atmosphere and the collision of multiculturalism. She has formed a warm and bold character, and she has been determined to spread Dehong folk music since she was a child.

When she grew up, Jin Ye Huowa's dream gradually came true. She performed with cucurbit silk in various parts of China, making more and more people understand and like folk music.

"I am more lively when I perform and like to walk around on the stage, while the traditional Hulusi performance can only be done by standing in front of the microphone." In 2004, Jin Ye Shouta's husband and musician Nan Jiang, in order to make Hulusi more suitable for Jin Ye Shout Baby's performance style, developed the electroacoustic cucurbit silk.

Its timbre is gorgeous, comparable to that of an electric guitar, which also makes Jinye Xiaowa's performance more diverse, "I can play rock music with electroacoustic Hulusi."

Since then, in order to make the cucurbit silk easier to promote, Nanjiang has successively developed synthetic material cucurbit silk, speaker cucurbit silk and other products, which are favored by the industry.

And Jin Ye Xiaowa even has fans who like pop music and rock music.

Since 2016, under the leadership of her mentor Li Chunhua, Jinye Huowa has held a number of concerts in the United States, the United Kingdom, South Africa and other places with a group of domestic cucurbit flute lovers.

"When communicating with foreign artists, they initially thought that the cucurbit silk was a beautiful artwork, and were shocked when they heard that it could be played." What surprised foreign audiences even more was that Jin Ye Xiaowa played with cucurbit silk on the stage. Traditional Chinese folk music, world famous songs and rock music are perfectly integrated with the accompaniment of well-known symphony orchestras.

After the outbreak of the new crown pneumonia in 2020, Jinye Huowa promoted the cucurbit flute to online, and performed and taught through multiple short video platforms.

On July 2, 2022, in a special concert of "Folk Song Daguan·There is a Beautiful Place - Dehong Yunnan", which was broadcast live on multiple platforms at home and abroad, Jinye Huowa performed the famous cucurbit flute song "Deep Bamboo Forest". Office", "I hope more people around the world will learn about China and fall in love with China through cucurbit silk."