Adele, prophet in her land

Five years ago Adele did not face her parish, after those concerts suspended at Wembley due to her eternal problems with her vocal cords in 2017...... 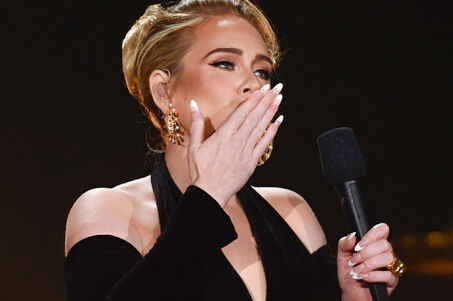 Giving sporadic sips of a steaming cup with a hot concoction, drinking from the microphone as if it were a bottle of wine, the Tottenham singer

put her countrymen in her pocket

and dazzled locals and strangers with her jet of voice and her demeanor. diva at 34, "like a modern Barbra Streisand" (Will Hodgkinson's greatest words in The Times).

"Hello, it's me, I was wondering if after this time you would like to see me," Adele greeted, as a preamble to 'Hello' with him, he inevitably opened his reunion with the crowds in Hyde Park (in November he had already been, but almost incognito, at a "gig" at the Palladium just for his famous friends).

Adele also came with the

double challenge of getting even for the Las Vegas fiasco

, when she suspended her concerts at Caesars Palace in January, "because she felt the show wasn't good enough and she didn't want to disappoint people."

He tells all these jokes on stage with that naturalness that is so his own, as if the years spent in Hollywood, the troubles of the notorious divorce and the kilos lost along the way did not weigh in the least.

Now, when the talk is over and he leaves 'I Drink Wine' behind, and hits hard with 'Rumor Has It', all doubts dissipate and his audience gives in unreservedly.

Until then, the color gold dominates everything:

his hairstyle, his earrings, the Art Deco background.

Until with 'Skyfall' the fire appears, and makes us imagine Daniel Craig courting her in the gallery of friends and celebrities (James Bond missed the appointment, but Tom Cruise was in "Mission: Impossible").

With that amazing naturalness to go from climax to anticlimax, Adele winks at all divorced women as 'Send my love (to your new lover)' and then explains to her son Angelo

the personal struggles of their separation

From there we travel back to 'All I Ask', from his album '25' and so on until we reach that divine ballad borrowed by Bob Dylan, 'Make You Feel My Love', which he included on '19', his business card with which he reached triple platinum in the United States and the first of his fifteen Grammys.

to give the chatter.

She literally wedges the microphone between her breasts to free her hands so she can fire a squirt gun that launches T-shirts into the audience.

She connects with her fans in a thousand ways and reconnects with the opening notes of 'Someone Like You', sang along from start to finish by the crowd.

Then he premieres 'Oh My God' live and in the final stretch he invokes the rain in 'Set Fire to the Rain', until reaching the final fireworks of 'Rolling in the Deep' with a final display of pyrotechnics.

But there's more, and Adele reappears wrapped in a rainbow flag and wishing everyone 'Happy Pride!'

before facing the 'Love is a Game' with which she ends the party of almost two hours.

"The residents of the park are a bit posh and impose a rigid curfew on us," warns the scathing diva, defying the storm clouds and once again a prophet in her land, from Tottenham to Kilburn, passing through the BST festival in Hyde Park, in the two most anticipated nights of this summer of the great musical revenge.